Diageo-owned Lagavulin has teamed up with the Rhythm and Booze Project and vintage drum specialist Majetone Industries to build a bass drum from a cask once used to mature its single malt. 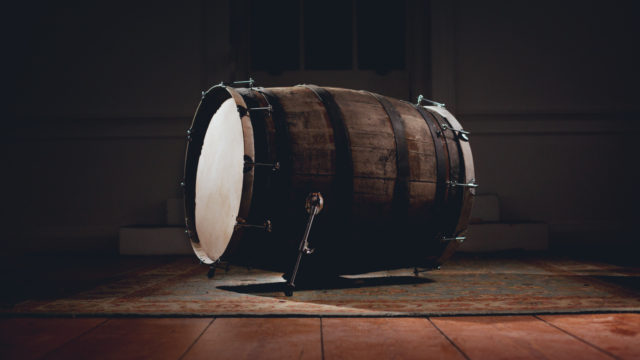 The Rhythm and Booze Project, founded in 2018 by musicians Felipe Schrieberg and Paul Archibald, decided to collaborate with the Islay-based distillery to create a drum.

The cask had previously been used to mature Lagavulin’s single malt Scotch and before that, had been used to age Bourbon.

The musical duo have now released a video on Youtube, documenting the drum’s creation and showcasing its sound while being used in a cover version of John Lee Hooker’s blues tune Boom Boom.

Commenting on the news Schrieberg said: “The idea for the drum began as a light-hearted chat that we didn’t think would actually happen, but when we asked Colin Gordon (Lagavulin’s distillery manager) about it, he was on board. We’re delighted and proud of the result. It sounds like thunder.”

Built like a Viennese timpani, the drum has skins on either side that have been stretched over the top of metal hoops that were once used to hold the cask together.

Archibald added: “Our first visit together to Lagavulin in 2012 is one of our most memorable whisky experiences. Because of that trip, we now play at the distillery every year during the Feis Ile. This drum is the representation of that personal connection, our passion for Lagavulin, and for Scotch whisky in general.”

The pair said that using the entire cask for the drum means that they’re able to achieve a resonance with “unbelievable depth” with a sound that is “loud, vibrant, deep, and unlike any other instrument of its kind”.

Distillery manager Colin Gordon said: “I have known the band for a few years and similar to myself they share a passion for great music and great whisky. Having played the drums since school, I was so excited when Felipe and Paul presented us with this idea.

“We quickly sourced the cask, which had previously held our iconic Islay whisky Lagavulin, and in a short space of time it was transformed into the bass drum. I was lucky enough to join the band at Feis Ile 2019 and play along on the drums using the new bass drum.

“It was the perfect way to celebrate the building of the drum and we all agree that it is an excellent musical representation of our whisky, famous worldwide for its signature smoke and robust flavours.”

The drum is now on display at the Lagavulin distillery. The Rhythm and Booze Project hosts events and records videos which combine music and whisky tasting.