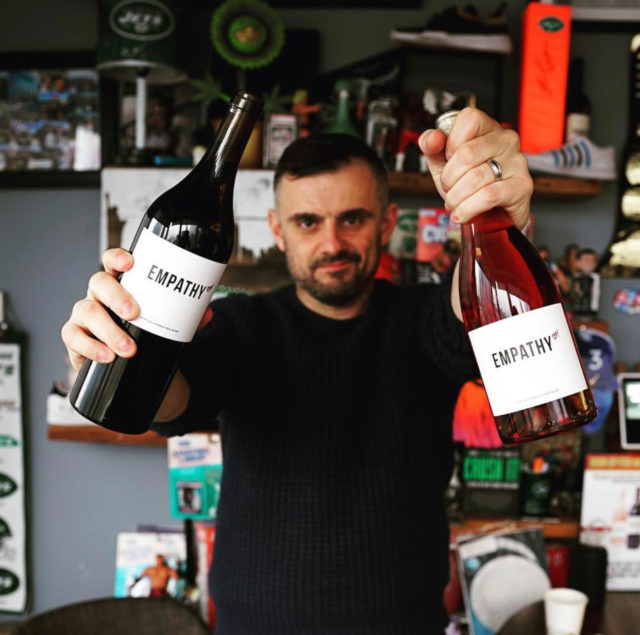 Vaynerchuk, who rose to fame in the early noughties through entertaining wine videos posted on his Wine Library TV webcast, has partnered VaynerMedia colleagues Jon Troutman and Nate Scherotter on the project. 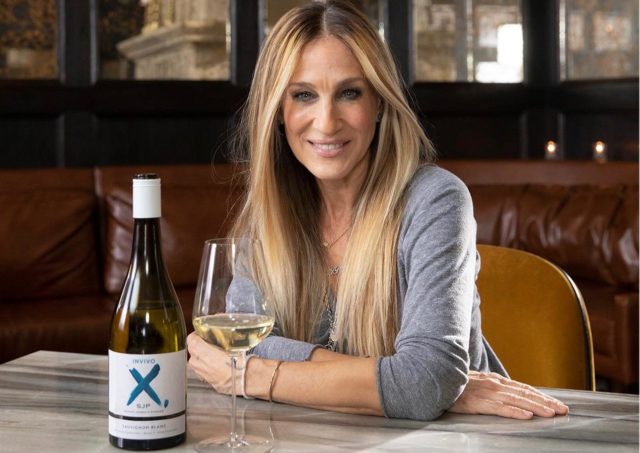 And speaking of celebs with wine, the first bottles of Marlborough Sauvignon from American actress Sarah Jessica Parker’s new wine range – Invivo X – will go on sale in the US this September.

Parker’s 2019 New Zealand Sauvignon Blanc will go on sale in 18 US states and eight countries on 18 September. 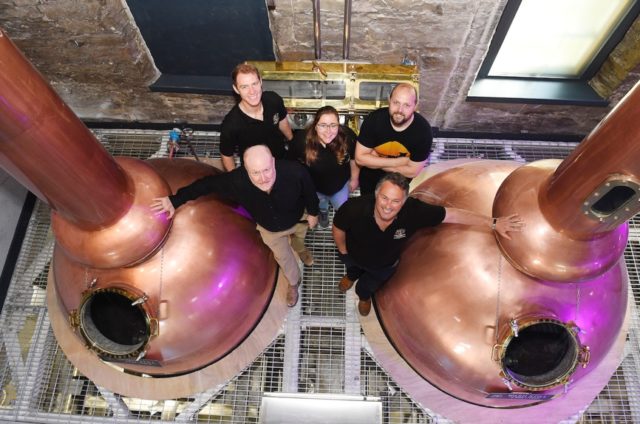 It is the first single malt whisky distillery to open in the Scottish capital since 1925, when The Edinburgh Distillery (better known as Glen Sciennes) closed.

Founder Rob Carpenter and his team gathered to unveil their distillery and welcome the very first visitors for one of their daily guided tour experiences on Tuesday (30 July).

The opening is well timed, as the Edinburgh Fringe will welcome hundreds of thousands of tourists when it starts on Friday (2 August). Visitors can take time out of their tightly-packed show schedule to book a tour of Holyrood’s new gaff, which cost close to £7 million (£6.5 million) to bring to life. 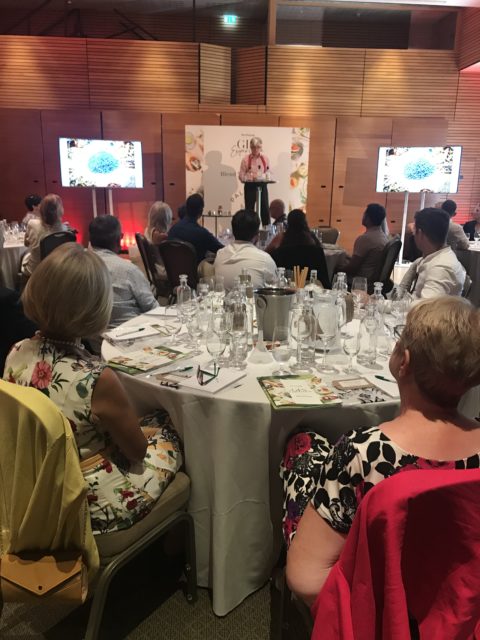 The Edinburgh Fringe may have just kicked today, but the best improv show we’ve heard about this week was organised from a dual carriageway somewhere between Cambridge and the north circular.

What do you do when you are stuck in traffic on the M11, when you should be hosting a gin masterclass in distant London?

Phone-in is the answer.

So The Telegraph readers expecting a gin masterclass from the youthful, female director of Palmer’s Gin producer Langley Distillery at The Hurlingham Club were more than surprised when Natalie Wallis Palmer was suddenly transformed into “long-matured, earthy, flat-faced Rupert Ponsonby” (their words, not ours), who became a Palmer for an hour on Thursday (1 August).

He spoke about the History of Gin, the 200 year history of the alcohol distiller Langley Distillery and the launch of Palmers London Dry Gin in remembrance of Granny (Angela) Palmer, who left the family her recipe in her will. 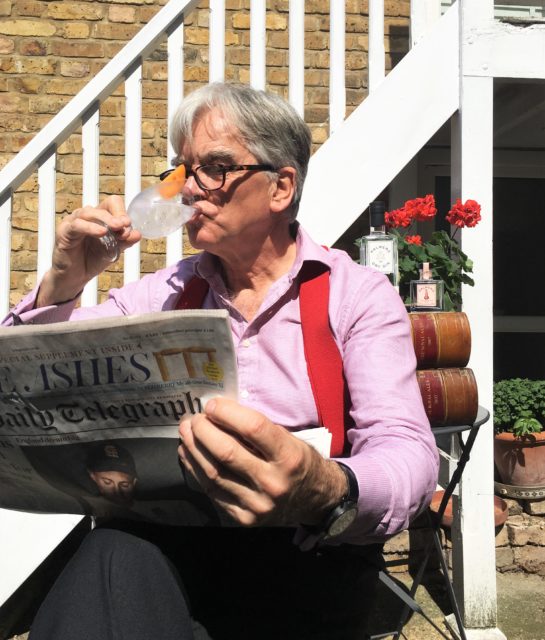 Ponsonby didn’t feel like giving up his new persona too quickly. He and his red suspenders relaxed with a G&T and a browse of the papers afterwards.

Our spies told us poor Palmer was stuck on the M11 for “hours and hours”, but she did manage to make her 6pm slot at least. 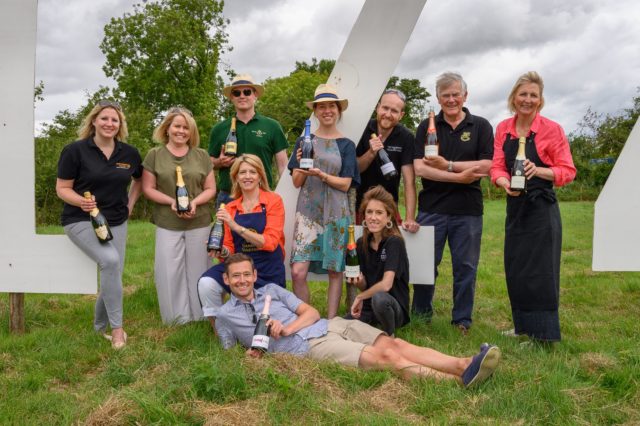 On Sunday, UK winegrowers came out in force for the 7th Vineyards of Hampshire Fizz Fest.

More than 1,200 people schlepped out to Exton Park for the occasion. Our spies on the ground saw representatives from eight wineries in the area including Black Chalk, Hambledon Vineyard, Hattingley Valley, and Jenkyn Place. 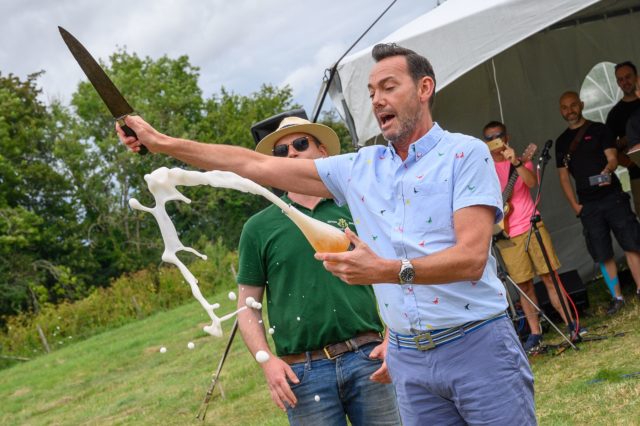 Although we were more impressed with the opening ceremony. Strictly Come Dancing judge Craig Revel Horwood opened the wine festival with a sabrage attempt. You couldn’t make this up. 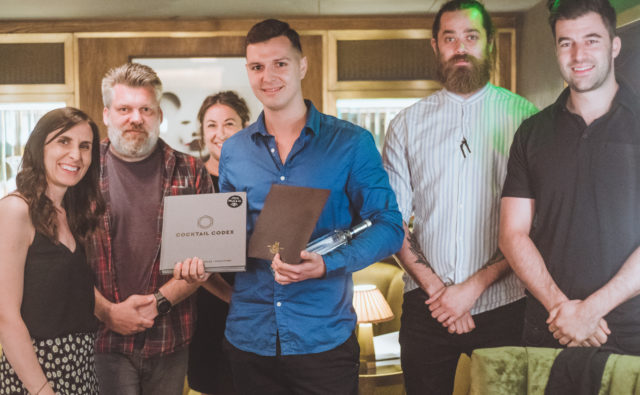 In edgy pink drinks, congratulations to Eric Tinca from east London cocktail bar, Satan’s Whiskers, who was crowned as the winner of mixer maker Fentimans’ first national Summer of Rose mixology competition, which took place at Soho haunt The Disrepute on Monday (28 July). 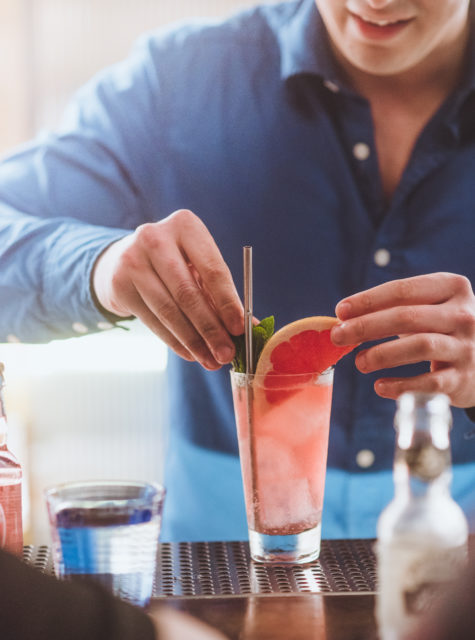 Tinca won the judges over with a cocktail that “evokes the feeling of poolside Ibiza in the heart of London.”

The cocktail will be served at Satan’s Whiskers during the summer as well as being listed in the Paradiso Art Hotel for two weeks following the competition. 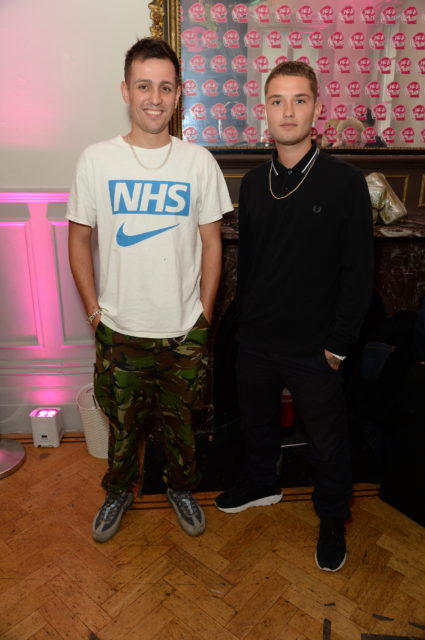 The celebrity sons were out to celebrate the launch of the new Dead Man’s Fingers Hemp Rum (rum infused with CBD, the non-psychoactive compound in Cannabis if you haven’t already heard of it.

Making sure the brand is down with the kids, the event also featured a cannabis lifestyle concession stand. 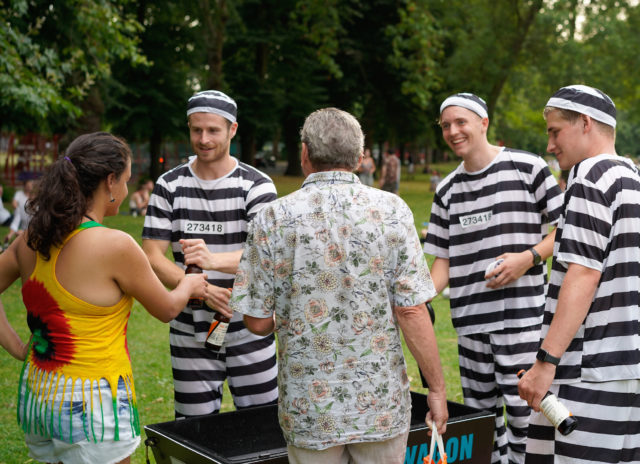 On Wednesday, Cornish beer brand Jubel tore around London in robber garb handing out thousands of ice-cold beers to Sainsbury’s shoppers. This Robin-Hood style act was a reactive response to an article in The Grocer claiming that theft costs UK grocers as much as £4.4 billion every year, and a 2% loss of product.

In small screen news, congratulations to Hogs Back Brewery in Tongham, Surrey, will feature on this week’s Saturday Kitchen on BBC One, to be broadcast on Saturday (3 August).

The show filmed in the brewery and adjacent hop garden this week to spotlight the role that Surrey-grown hops play in creating the Hogs Back beer range. 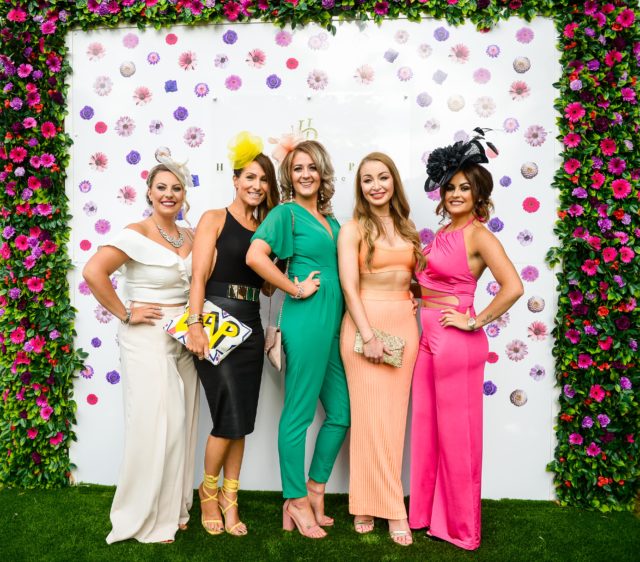 In addition to being the official naming partner, the deal will also see the full range of Boe Gin products available at all bars across the racecourse, including a bespoke ‘Boe Violet Gin’ bar. 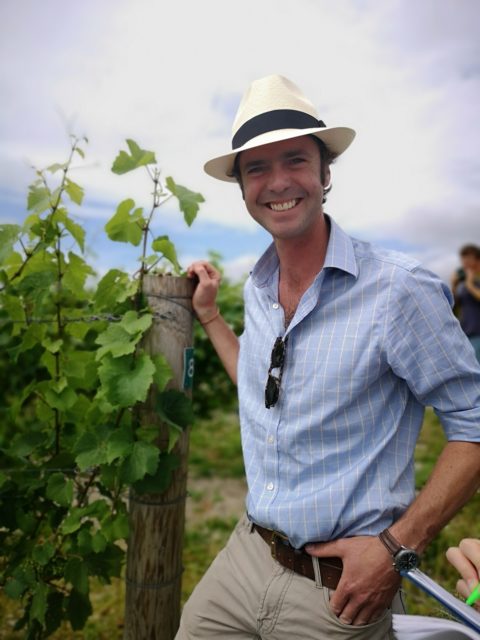 db got to make the most of the English summer this week during a trip to Exton Park estate in the rolling Hampshire hills. During our visit to the 60-acre estate, we were given a grand tour by ebullient vineyard manager Fred Langdale, who told the story of the first Chardonnay vines being planted at Exton Park in 2003. The grape now accounts for around 45% of the plantings, the an additional 45% made up of Pinot and Meunier making up the remaining 10%. 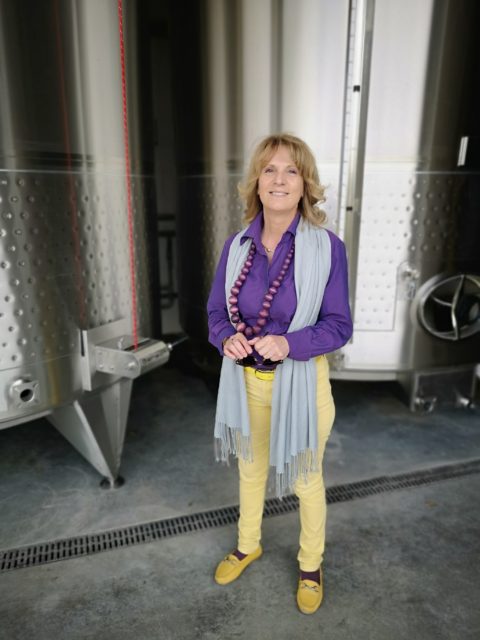 During our tour we were shown the estate’s shiny new fermentation tanks by French winemaker Corinne Seely, who believes passionately in the potential of English sparkling wine. Rather than focusing on vintage offerings, Seely is championing non-vintage cuvées at Exton Park and believes the estate’s signature style is mineral and precise. She avoids malolactic fermentation in order to let the estate’s chalk terroir do the talking. 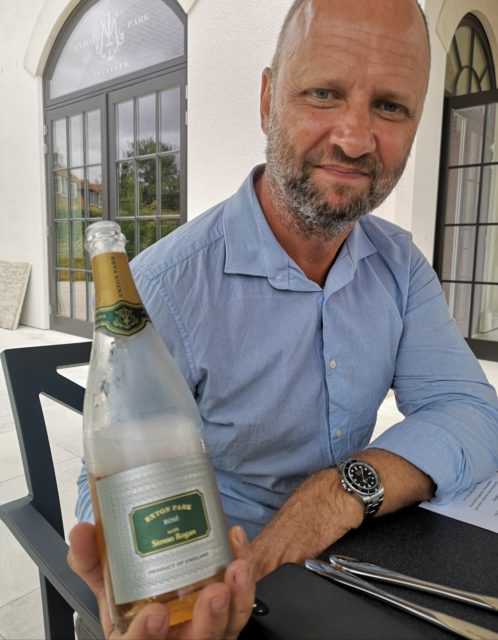 After our tour we were treated to a four-course lunch cooked by one of our all-time favourite chefs, Simon Rogan who runs restaurant with rooms L’Enclume in Cumbria, and Roganic and Aulis in London. He’s also recently opened outposts of Aulis and Rognanic in Hong Kong. During lunch we got to try a new rosé cuvée made in collaboration with Rogan and Exton Park, which is on pour at all of his restaurants. 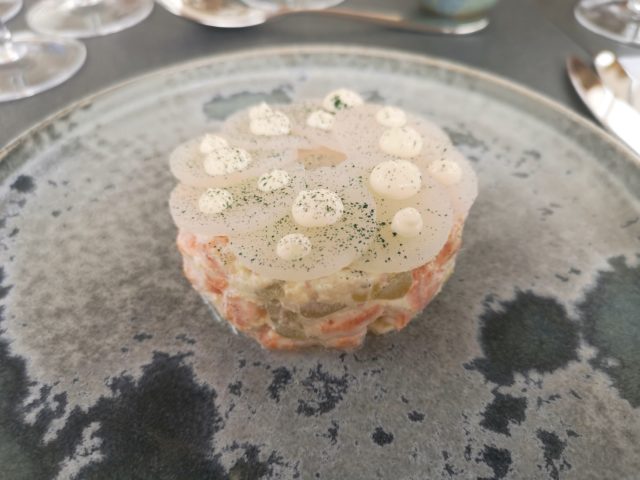 Among the culinary highlights of our languorous lunch was this chalk stream trout tartare with fermented gooseberries and horseradish, which paired a treat with the tart apple and red summer fruit aromas in the Rogan Rosé.