Captain Picard’s Star Trek wine launches in the US

The production team behind the upcoming Star Trek: Picard series has teamed up with Bordeaux winery Château Picard to launch a limited-edition wine purporting to be from the family vineyards of fictional Star Trek Captain, Jean-Luc Picard. 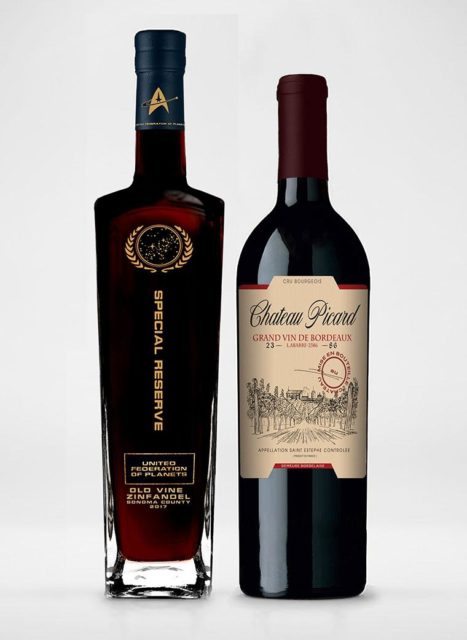 The 2016 Château Picard Bordeaux, which is available from US wine lifestyle company Wines That Rock, features almost identical labels as bottles from the Picard family vineyards in the upcoming series and will be available as a limited-edition collector’s item, it was announced by StarTrek.com.

In the Star Trek: Next Generation TV and film universe, Captain Jean-Luc Picard (who is portrayed by British actor Patrick Stewart) comes from a family of French winemakers from La Barre in Bourgogne-Franche-Comté, where they produce a futuristic Burgundy under two labels: Château Picard and Château La Barre.

The series first full trailer, which was released at Comic Con San Diego last week and sees the first return of the character since 2002, opens in the Picard family vineyards and features images of the family’s wine bottles. However the label of the real wine differs from that shown on screen because the real winery is based in Bordeaux and the fictional one in Burgundy.

The new wine comes from the ‘real’ Château Picard, which is located St-Estèphe and owned by Bordeaux négociant house Mähler-Besse, which worked with the Star Trek team to craft a blend of 85% Cabernet Sauvignon and 15% Merlot, which has spend 14 months in oak. It is a ‘subtly smoky and spicy with a bright, fresh, clean-tasting style’, the company said.

“We knew there actually was a Château Picard wine being made for several generations in Bordeaux France, long before there was a Jean-Luc Picard,” Howard Jackowitz, co-founder of Wines That Rock told StarTrek.com, adding that the Bordeaux winery made a highly regarded and much-sought after Cru Bourgeois.

“Obviously, there was no mention of Star Trek’s Jean-Luc on the bottles, as it was the legacy family’s winery from Bordeaux. No connection other than the name. So, working together with the Star Trek production team and Château Picard winemakers in France, we crafted this limited-edition wine with Jean-Luc’s family label and the wine from this 5th generation vineyard.”

Wines that Rock is offering a limited-edition of 1701 two-bottle special collectors pack which includes the Château Picard and a 2017 Special Reserve United Federation of Planets Old Vine Zinfandel from Sonoma County (priced: $120 for the two bottles).  The wine is a blend of 87% Zinfandel, 12% Petite Sirah and 1% Syrah from Dry Creek and Russian River in Sonoma, and comes in a livery similar to that of the USS Enterprise.