Champagne Jacquart’s cellar master, Floriane Eznack, is stepping down from her role at the end of June after eight years at the helm of the house.

Eznack was made chef de cave of Jacquart in 2011, aged just 30, making her one of the first (and youngest) female cellar masters in Champagne. Shortly after joining the house, Eznack drastically scaled back the Jacquart range from 18 lines to just six.

In her role at the Chardonnay focused house she worked with 1,800 grape growers in 60 villages and oversaw the blending of Jacquart’s signature Mosaïque collection, which includes a brut, extra brut, rosé and blanc de blancs.

The grapes that go into Brut Mosaïque are sourced from 40-50 crus. The blend has at least 30% reserve wine and is aged for up to four years. 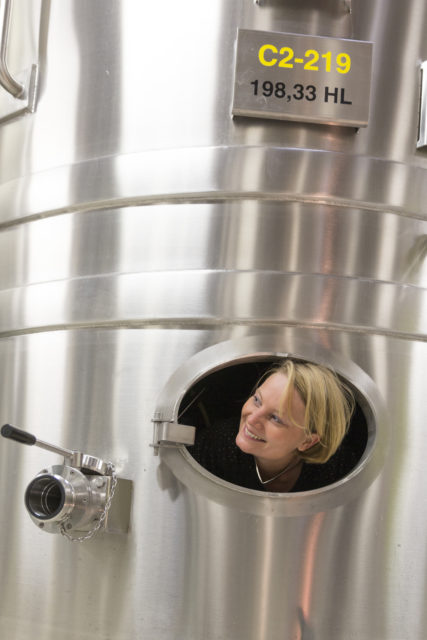 During her time at the house, Eznack sought bring more texture to Brut Mosaïque, focusing on creating a non-vintage style that is smooth, rich and fresh.

Having dreamt of being a fighter pilot, prior to Jacquart, Eznack worked at Veuve Clicquot for four years as an assistant winemaker.

“It is with mixed feelings that I announce my departure from Champagne Jacquart at the end of June. I was not predestined to become a cellar master, but it has been a wonderful opportunity working worldwide with dedicated and passionate wine professionals,” Eznack said in an email to db.

“Throughout my career, I met passionate growers, winemakers and wine lovers who encouraged me to develop my curiosity. I also had the chance to meet people who trusted me and let me express my creative mind.

“When I joined Jacquart in January 2011, I sought to refocus our style around the Mosaïque collection and the blanc de blancs vintage, emblematic of the house.

“I also created a prestige cuvée, Alpha, and a single cru cuvée which will launch soon. Now, it’s time for me to start to write a new page of my story,” she added.

Just last month Eznack spoke very candidly to db about the challenges of being a female cellar master in a male dominated region.

“It’s still very hard being a female chef de cave – I’ve had to work harder than my male counterparts to prove myself and my ability because I’m a woman. I have three male colleagues and they still think I’m the gentle blonde that is more focused on communication than the technical side of things.

“It’s exhausting having to constantly fight to prove that I’m capable of doing my job,” she said, though added that things are slowly changing for the better. There are a lot of women poised to take over their houses in the next 10 years, but it’s still hard for women to reach the top in Champagne.

“I’d love to see a change in the patriarchy as there is a glass ceiling above our heads, and a lot of women in the region are viewed as only being interested in marketing and communications,” she said.