Champagne Taittinger has planted a further 8.5 hectares at its Kentish vineyard Domaine Evremond as it gears up for its first commercial harvest this year. 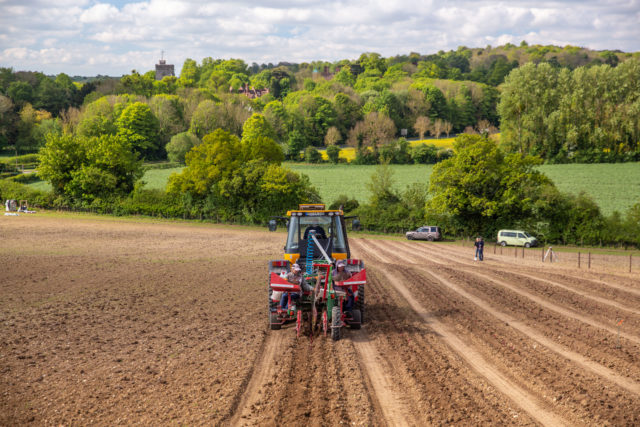 Domaine Evremond, located just outside Chilham in Kent, has been expanded after it was first planted in 2017. An additional 8.5 hectares of vines, consisting of 60% Pinot Noir and 40% Chardonnay, have been added to the original 20 hectares (planted with Chardonnay, Pinot Noir and Meunier) bringing the total area under vine to 28.5 hectares.

Christelle Rinville, viticulturist for Champagne Taittinger, who supervised the planting last month said the vines were planted on former arable land with chalk soils and a south-facing aspect.

Domaine Evremond is a joint venture between Champagne Taittinger and its UK agency Hatch Mansfield. It is expected that the estate’s first commercial vintage will be this year with a view to the release of its first wines in 2024.

The Taittinger family acquired the land for Domaine Evremond in autumn 2015. Speaking at the planting two years ago, Pierre-Emmanuel Taittinger said: “Our family has always had a great affection for the UK and for Kent – my father Jean Taittinger twinned Canterbury with Reims when he was mayor of the latter in the 1950s. We have been very impressed by the quality of English sparkling wine being produced, and we believe the combination of chalk soils, climate and topography of our site in Kent are ideal for producing quality sparkling wine. These attributes are perfect for grape growing, and are very similar to the terroir in Champagne, for us it was a natural step to do this.”

Commenting on the new planting, Patrick McGrath MW, managing director of Hatch Mansfield, said: “These new plantings took place in ideal conditions on two adjacent sites, and we are optimistic that they will produce top quality fruit in the future.” McGrath has previously revealed that the site is aiming to produce 300,000 bottles per year.

Champagne Taittinger was the first Champagne house to plant vines in the UK, closely followed by Champagne Pommery. Champagne Pommery has, however, already released a wine under its brand called Louis Pommery, owing to a partnership with Hampshire’s Hattingley Valley. It sees the Champagne house’s chef de cave Theirry Gasco selecting and blending Hattingley’s produce alongside the estate’s head winemaker Emma Rice. Pommery also planted vines in the same year as Champagne Taittinger, selecting 40 hectares of land near Southampton in Hampshire.

This follows news that a total of 3 million vines are due to be planted in the UK this year. This equates to an extra 690 hectares under vine, representing a 24% increase in the total area. A total of 1.6 million vines were planted in 2018 and 1 million the previous year.

Chairman of WineGB, Simon Robinson, referred to the news as “another milestone” for the industry, predicting that at the rate of current growth, the UK is set to produce around 40 million bottles of wine a year by 2040.