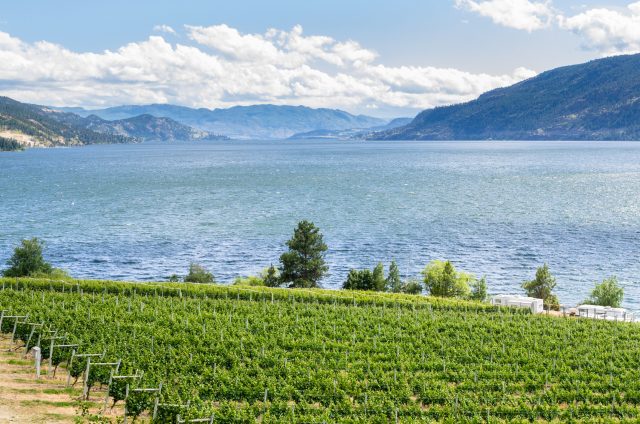 The 200km valley is one of British Colombia’s up and coming wine regions, with Golden Mile Bench a 21km bench south of the town of Oliver on the Western slope of the lake becoming the first GI to be declared in the Okanagan in 2015, followed by Okanagan Falls in August last year.

Naramata Bench is situated on the east side of Okanagan Lake, north of the City of Penticton, and comprises 14 km of slopes overlooking the lake, with twenty-four wineries.

Skaha Bench stretches from the outskirts of Penticton and covers a 10km along the eastern shore of Skaha Lake, north of Oliver. Varieties grown include Chardonnay, Merlot, Pinot Gris, Pinot Noir and Pinot Blanc.

Black Sage, a hot dry site to the south of the Okanagan, is widely expected to follow in due course.

Speaking at a recent tasting in London, renowned Canadian wine journalist Anthony Gismondi said the region had developed hugely in recent years and was moving ahead “with breakneck speed”.

“In the last five years, growth has been exponential, and the last two years it has gone off the chart,” he said, pointing to a raft of new, young producers who were taking wine more seriously and bring new influences and methods learned outside Canada to their wines.

“After years of average viticulture, you now have a great range – and there’s a lot more coming through,” he said.

Gismondi there likely to be increasing interest in the Okanagan Lake country from ‘serious’ Pinot Noir producers from California and Oregan in the US, attracted by the climate and virgin terroir.

Currently less than 5% of wines from Canada are exported, as the majority is sold on the domestic market.  ‘But that is changing, as more winemakers come in with more world styles,” he said.

The area he noted was very much in an exploratory phase, looking at a variety of grapes and styles.

People were no longer looking for ‘the grape of BC’ and there was a lot more experimentation with the wines were getting more interesting as a result, according to Selfridges wine & spirits buyer, Terry Threlfall who has just stocked a range of 20 wines from the region.

“It’s even improving the grapes that were planted as people are upping their game, so we have finally reached a point where we don’t us the Bordeaux, Burgundy, Napa-style terms, as they don’t mean anything in Okanagan, it’s much wilder and has its own story.”

Producers are exploring white varieties such as Gruner Veltliner and Pinot Gris, which is the most widely planted grape in British Colombia.

However, as Gismondi pointed out, the grape is very different when grown in the north and south of the valley, and people were “veering off in different directions and it is yielding a lot of drier examples. It’s been well made… and stretching the imagination of what can be done with this variety overnight. We will see a lot of changes in Pinot Gris going forward,” he said.

The area is also exploring sparkling wines with around two dozen producers experimenting with different methods, he said, making use of the natural acidity that marks one of the “key differences” of wines from the Okanagan.