A brewery in east London is clapping back at Brewdog’s new Punk IPA ad campaign by encouraging people to take pictures of themselves holding bottles of its own flagship beer to cover the Scottish brewer’s cans in the ads. 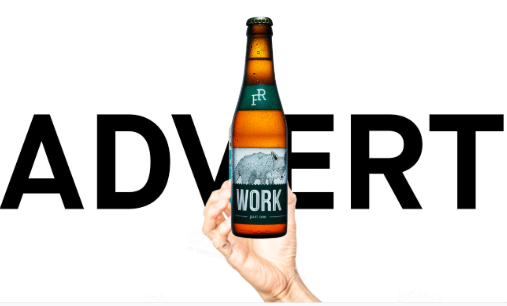 Brewdog’s campaign launched last week during an ad break in the latest episode of HBO’s Game Of Thrones. Dubbed the “most honest ad ever”, the brewery put together a 30-second video featuring the word ADVERT  displayed in large font with a can of Punk IPA in front of it while thrash metal music plays.

On buses, the ad is worded ‘ADVERT ON A BUS’ above a picture of a can of the ale.

In response, Forest Road Brewing Co, backed in Hackney, is asking fans of its craft beer to take pictures of themselves holding bottles of its flagship Work IPA to cover the cans of Brewdog in the ads – and then share their images on social media with @forestroadbrew and the hashtag #beerthatworks both on Instagram and Twitter.

Beer fans who follow Forest Road’s orders can claim a free pint from Forest Road Brewing Co’s Tap Room in Hackney by showing their picture to the bar staff.

Aaron Howard, one of the advertising creatives behind Forest Road’s campaign, said Brewdog’s ads are fun, but “not very punk – especially given that they said a couple of years back that they would never advertise.”

“Instead they’ve spent a large amount of money on high profile media placements – which could have been put to much better use. As a self-proclaimed challenger brand they could have used it to say something far more important. But, fortunately for us, what they have done is created the most hijackable ad ever.

“So, in the spirit of good fun, we’ve masterminded a free campaign for a smaller craft brew who can’t afford this type of media coverage. That’s proper punk.”

Pete Brown, founder of Forest Road Brewing Co said: “As much as we love that BrewDog are flying the flag for craft beer, the smaller, independent craft beer breweries like us simply can’t afford to spend this sort of money on media. So we loved the fact that this idea means we can get our name out there for free, and hijacking the Brewdog ad with our beer is a fun way to do it.”

This is not the first time breweries have gone to war in their ads this month.  Following the launch of Carlsberg’s “brave” marketing campaign and a new Danish pilsner earlier last month, Scottish brewer Tennent’s erected a billboard at its Duke Street visitor centre questioning the validity of its claims, directly across the street from a Carlsberg billboard.