One “leading” négociant in La Place de Bordeaux has already warned that the en primeur system is like a Ferrari in danger of spinning out of control but where does the value in Bordeaux futures currently lie? 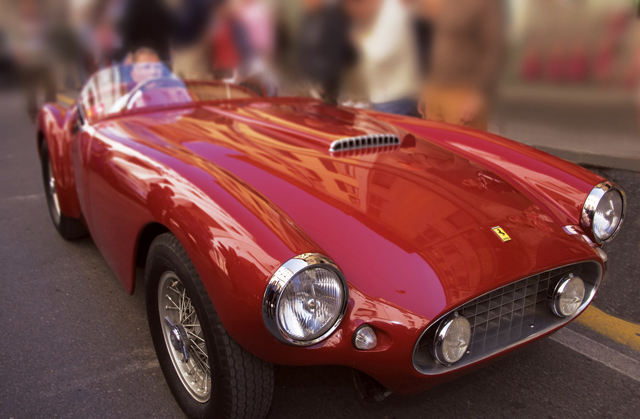 Both Liv-ex and Wine Lister have recently released hefty reports on the Bordeaux market as the en primeur campaign begins to rev its engines.

But the start of the Wine Lister booklet began with this quote from a leading Bordeaux négociant: “The context of this year’s en primeur campaign is like a Ferrari with worn tyres and fatigued suspension. The Ferrari here is the quality of the 2018 vintage, the road is the market and the wheels that connect the car to the road are the négociants, who bear the burden of 2016s that aren’t showing any return and 2017s that won’t find their place in the market for years. The faster the driver (the château) goes, the worse the accident will be.”

Last week, using the Liv-ex report, the drinks business reported that the effects of recent campaigns and factors such as Brexit and a depressed Chinese market made the 2018s anything but a sure sell – despite their apparent quality as wines.

The en primeur market is currently far from its peak. Farr Vintners has stated previously that there has been a, “marked fall in demand and appetite for buying Bordeaux vintages en primeur” and buying levels are “not likely” to return to the heights witnessed with the 2009 and 2010 vintages.

As can been seen in the graph provided by Liv-ex, en primeur sales have dropped off a cliff since the 2010s were offered.

Returns have been another thorny issue for the dedicated claret hound too. Since 2005 around half of the campaigns have seen wines that were cheaper 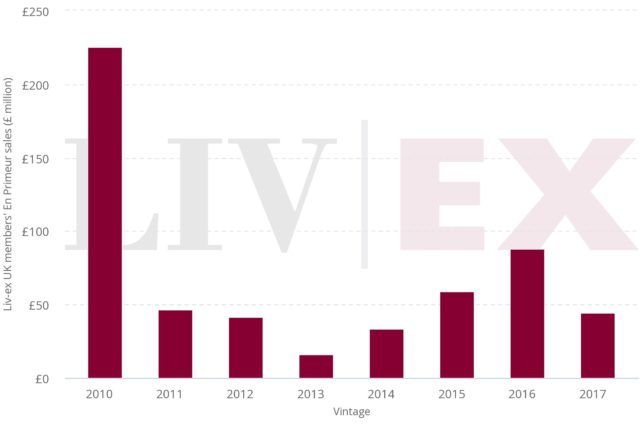 on release than they were en primeur, with the 2009, 2010 and 2011 vintages being the worst offenders – with the first two arguably being the most at fault.

There have been some successes. The 2012 to 2015 vintages all saw their wines rise in price between campaign and physical release and even the 2009-2011 wines have seen their negative returns shortened – especially the 2011s.

As Liv-ex noted though: “Looking at returns to date also suggests that most campaigns have been underwhelming for buyers. Five of 13 have produced negative returns. Even where returns are positive, buyers would have made more money investing in physical stock in some instances: the Bordeaux 500 Index has outperformed En Primeur purchases from 2005, 2006, 2013.”

Yet despite the repeated warnings that en primeur is dead and the négoce system is about to implode and all manner of other alarming portents, there remains thrill, glamour and indeed sound financial sense in buying Bordeaux futures – the trick is which ones you choose.

Which châteaux are getting it right, therefore, and how to measure it?

Wine Lister picked out Beychevelle, Calon Ségur, Canon, Les Carmes de Haut-Brion, Cos d’Estournel, Figeac, Léoville Barton, Lynch-Bages, Pichon Comtesse and Rauzan-Ségla as estates that had pitched their releases correctly last year with their 2017 offers – and indeed several of those have ticked the boxes for many in several of the post-09/10 primeur era campaigns.

A case in point was Les Carmes de Haut-Brion’s release, which Wine Lister called a “masterclass”. As the report said: “One of the only red wines whose 2017 matched its 2016 in quality terms, it was the property’s joint best-ever.

“The 2017 release price put it into the market at a 40% discount to the market value of the 2016, and, crucially, below the 2014 too, making it a very attractive proposition en primeur.”

Combine that with the label’s rising popularity helped ensure it sold out and gave it a boost on the secondary market.

Les Carmes de Haut-Brion and Lafleur were flagged by Wine Lister as offering the best returns for their 2016 vintages between offer and release (up 109%); followed by Petrus (64%), Canon (59%), Carruades de Lafite (58%), Calon-Ségur, Le Pin, Petit Mouton (34%) and Tertre-Roteboeuf among others.

Many of those names crop up in Liv-ex’s own analysis too (sometimes with marginally different figures – Canon’s 2016 is up 71% by its metrics for instance). The first growth’s second labels are a particularly successful area to have risen in recent times, its sub-index in the Bordeaux 500 showing a 226% gain in the last decade, 73% in the last five years, 69% in the last three and 6% in the past year.

Lafite meanwhile remains the strongest of the first growths for now but Mouton has been catching up to it for a while. The worst-performing first growth chart at the moment is that of Margaux.

Other châteaux with strong price performances away from more obvious brands are: Gruaud Larose, Clos Fourtet and Clerc Milon

If there are still winners to pick from though so too are there losers. Unfortunately, despite having produced some exquisite wines in recent vintages it is Sauternes labels that are struggling to keep up, with Suduiraut and Rieussec showing some of the worst returns among labels, red or white.

It’s hard to see a future for Sauternes within the primeur system as it currently stands. Perhaps a new approach is required?

For the reds, on the other hand, it is Pontet-Canet that is listed as one of the more over-valued brands en primeur and its 2016 release is currently down 12.5% on its release. Other brands that Liv-ex notes as being often over-valued are: Troplong Mondot, Evangile, Pavie, Cheval Blanc, Ausone, Haut-Brion, Vieux Château Certan, Pichon Baron and Angélus among others.

Again that is not to say the wines are bad nor even that they don’t deserve to command high prices, it’s just that when measured against the performance of previous vintages and taking scores into account, they consistently look like poor choices to buy en primeur because they will either lose the buyer money and/or allow another buyer to pick them up later for less.

Liv-ex, Wine Lister, all the major merchants and critics involved in primeurs and industry publications such as db now generate a wealth of material every year on this subject from wine quality to price analysis.

There is ‘fair value’ still to be found in en primeur – at all price points and not all of it comes down to accounting, arithmetic and algorithms.

That said, as primeur contracts in its scope and importance to many on all sides of the futures industry, the Bordeaux buyer is better equipped than ever when it comes to making informed buying decisions and will undoubtedly reward market-sensitive châteaux by choosing their wines over those of more tone-deaf neighbours.