Bordeaux 2018: Freshness is the key

2018 is an exceptional vintage. But it is one that is more heterogeneous in quality than either 2015 or 2016 and whose greatness and unevenness are defined by the challenge of global warming. 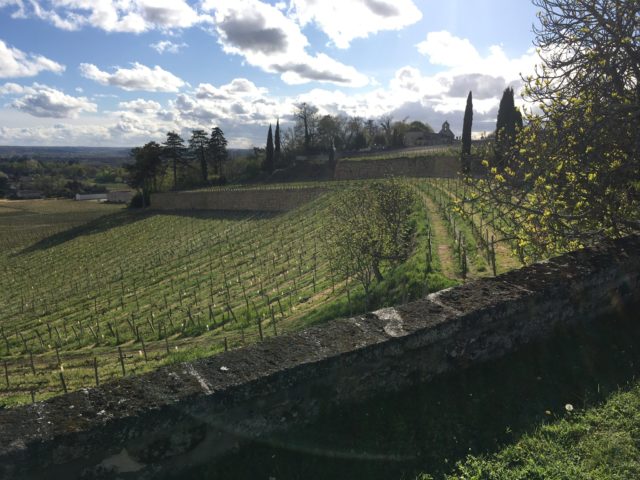 As I reported this time last year, Bordeaux 2017 was a vintage defined by the frost – its presence and its uneven distribution (within and between vineyards). 2018 is also a vintage defined by climatic challenges – but not in the same way, nor ultimately to the same extent. And unlike its immediate predecessor, 2018 is an undoubtedly great vintage, richly deserving of it place in the recent pantheon of qualitative greats: 2005, 2009, 2010, 2015 and 2016.

But, having just returned from the week of the Bordeaux en primeur tastings, what is striking is that this is a more complex and, in the end, a more heterogeneous vintage than perhaps any of these other recent greats.

To understand why is to understand the climatic challenge that needed to be negotiated both in the vineyard and in the chai – and the extent to which that challenge was met.

First, the good news. In practically every property that I visited, the vines recovered well from last year’s intense frost. Anxieties about damage over the two-year vegetative cycle proved largely unfounded. Potential yields were reduced by a number of factors, but the lingering consequences of last year’s frost damage were not among them.

Indeed, as Julie Guinaudeau explained at Château Lafleur, the mild and early spring led to an early bud burst and prolific early growth. Things had started well. Yet this was in fact a precursor for what would turn out to be the biggest challenge of the vintage.

For between March and June an average of 361mm of rain fell in the region – over 80% of the rain that fell in the entire growing season. March alone saw 126mm of rain, almost exactly double the 30-year average. This, in combination with the precocious and mild spring, led downy mildew to spread like wildfire through untreated or late-treated vineyards (as it was doing in other regions of France, notably the Rhône valley where producers tend to trust to the Mistral to keep it at bay).

The result was potentially devastating – the 2018 equivalent of the frosts that had ravaged vineyards almost exactly a year earlier. But, unlike the frost in the preceding vintage, this time the best terroirs were not spared and the problems were greatest in vineyards managed organically or biodynamically. The authorised treatments were simply no match.

As this suggests, the damage was spread very unevenly. Least effected were the airy, wind-dried côtes of St Emilion and the extreme north of the Médoc; Petit Verdot (typically grown in the largest quantities in the southern Médoc) was also partially spared, leading to some unusual final blends (in the Margaux appellation in particular).

Worst effected, of course, were organic and biodynamically farmed vineyards – with Châteaux Palmer and Pontet Canet reduced to miniscule yields of 11 hl/ha and 8 hl/ha respectively and with Château Angludet (in Margaux) tragically losing 90% of its potential yield (after suffering the loss of its entire crop to frost in 2017).

Yet mildew was not the only climatic threat to the vintage. The next problem came not from the ground, but from the heavens – in the form of the intense if localised hail that has become a perennial threat in recent vintages. On 26 May, it was the vineyards of Bourg, Blaye and parts of the lower Médoc and Pessac-Léognan that were hit – with the entire production of Château La Lagune (in the southern-most part of the Haut-Médoc) wiped out by hailstones “the size of pigeons’ eggs”, as Caroline Frey put it, and with considerable damage in the vineyards of a number of Médoc and Pessac classed growths (including Cantemerle and Smith Haut Laffite).

And almost two months later, on 15 July (as France were winning the World Cup Final) hail again ravaged parts of the region. This time Sauternes 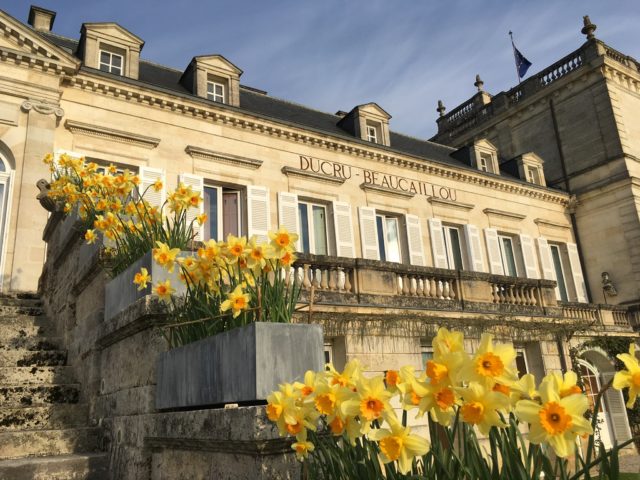 was the principal appellation to be affected (though Bourg and parts of the Haut-Médoc were hit for a second time), with Château Guiraud’s entire production being wiped out while neighbouring Château d’Yquem was only narrowly spared.

Yet, this localized explosion from the heavens notwithstanding, July brought relief from the rain that had thus far characterised the year. It ushered in one of the longest and driest summers on record (with a mere 82mm of rain falling between July and the end of September). The transformation was as remarkable as it was timely – and it saved the vintage.

But there is another – perhaps more alarming – way of looking at this. For 2018 was a summer that, in the absence of the monsoon conditions of the early spring, would have led to very significant (and vintage-threatening) hydric stress in the vineyard.

In a way, and despite its considerable challenges, Bordeaux 2018 is a ‘miracle’ vintage – a phrase repeated many times during the en primeur tastings. It was saved, in effect, by global warming from global warming.

But that makes it worrying when placed in a longer-term perspective. For with global climate change vintage-threatening risks proliferate. The unevenness of rainfall across the year is increasing; the likelihood of early bud-break exposing vineyards to the risk of hail and frost damage is rising; average summer temperatures are rising; average summer rainfall is falling; and violent hail storms are more prevalent.

With the exception of frost, 2018 saw each effect in play. This is the ‘new normal’; and the new normal may well make exceptional vintages less frequent.

But in 2018 circumstances conspired to produce optimal ripeness. As Sébastien Vergne explained to us at Château Margaux, the long, languid Indian summer saw alcohol levels peak in late August and early September and then plateau.

This allowed picking to be done, row by row, parcel by parcel, over the period of an entire month – with full maturation of the tannins and tiny grapes concentrated by mild hydric stress and a rather windy September. The results are spectacular, at Château Margaux and more generally.

So what of the wines themselves? In future pieces on the Médoc, the Right Bank, I will try to paint a more complex and nuanced picture of the vintage.

But, in general terms, this is an exceptional yet distinctive year. It is also neither a ‘Left Bank’ nor a ‘Right Bank’ vintage. Excellence is to be found in both. 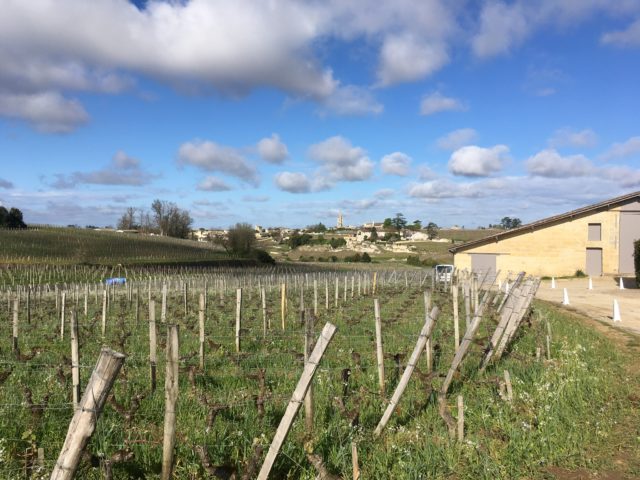 Alcohol levels are undoubtedly high but in the majority of cases and certainly from the best terroirs they are adequately compensated by the freshness that comes with higher levels of acidity.

Where this is reinforced by restrained and intelligent wine-making the results are truly fantastic. The top wines, really in each appellation, are as good as any en primeur samples I have tasted in recent years. The quality of the gloriously opulent and svelte tannins is remarkable, drawing comparisons with 2016 and making many of these wines approachable even now. The vintage is rich, plump, plush, powerful and intensely structured.

But there were pitfalls too. Over-extraction, over-ripeness, alcoholic ‘heat’, and even a hint of residual sugar marred many samples and masked many terroirs. The succulence of the tannins allied with the power and concentration of these wines at times lead to a certain soupy heaviness and a lack of precision and finesse.

In 2018, freshness is the key. Where it has been captured the wines are extraordinarily elegant and lithe, yet dynamic and energetic – more so than in 2016 in my view.

But where it is absent, the wines taste one-dimensional and lacking in terroir expression, interest and singularity. The highs are very high indeed; but not everyone got this tricky vintage right.

Though it is very difficult to generalise, in the Médoc the very best wines tended to come from St Julien (probably the most consistent appellation in 2018) and St Estèphe – though Pauillac, too, produced some glittering successes (notably among its first and second growths).

On the Right Bank it was the wines from the limestone côtes of St Emilion and from Pomerol that were most fêted – and which retained most freshness. Particularly impressive were those wines with a good proportion of Cabernet Franc and/or Cabernet Sauvignon in the blend.

The exceptions, then, are wines made exclusively from Sauvignon Blanc – such as Pavillon Blanc de Château Margaux and Les Champs Libres (from the Guinaudeau family of Château Lafleur) – and those with an unusually high share of Sauvignon in the bland – such as the wonderfully exotic Château Haut-Brion blanc.

In short, there are plenty of fantastic wines to be found in Bordeaux 2018; but freshness is the key and you have to go looking for it.

Colin Hay is Professor of Political Science at Sciences Po in Paris where he works on the political economy of la place de Bordeaux and wine markets more generally. His Bordeaux 2018 coverage will continue with further pieces on the Médoc, St Emilion & Pomerol, and Pessac-Léognon in the coming weeks.