Porto conference: ‘Wine is the canary in the coal mine’

“Wine is the canary in the coal mine of agriculture,” according to wine writer Jamie Goode when speaking at the Climate Change Leadership conference in Porto. 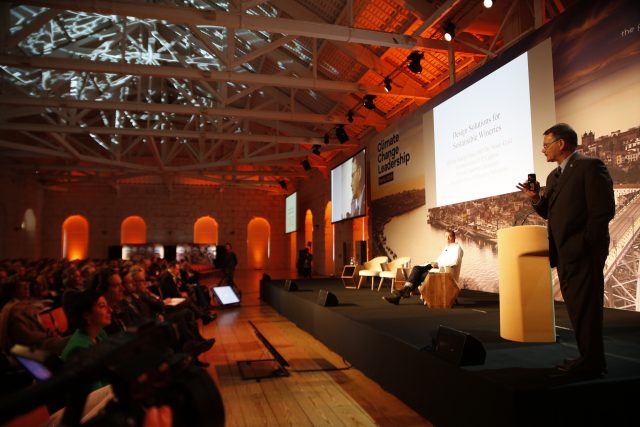 Introducing a session on ‘Wineries of the Future’ at the conference, Goode said that the wine industry was, “exquisitely sensitive to climate change,” and that if the industry was serious about tackling the issue, a vital step was, “wineries need to be carbon zero.”

As he explained, wineries are “energy hungry”, gobbling up power and water for all manner of uses yet are only used seriously once per year.

He was introducing Roger Boulton from the Department of Viticulture and Enology at the University of California, Davis, who was presenting a talk on ‘Design Solutions for a Self-Sustainable Zero-Carbon Winery’.

The day’s morning sessions included talks from Miguel Torres and others who had talked about ways for wineries to lower carbon emissions and make better use of water and so on.

Boulton explained how it was possible to make a winery entirely carbon neutral and completely off the water and power grid – and could be run on lithium batteries.

Furthermore, this ‘smart winery’ was not a concept that is yet to come to fruition, it has been realised, at UC Davis, in the shape of the ‘Jess S. Jackson Sustainable Winery’.

The 8,500 square-foot building was opened in 2013 and is entirely self supporting, capturing water, sunlight and carbon and recycling them multiple times and, in the case of carbon, creating waste by-products (in the form of calcium carbonate) that can actually be sold on to other industries that need it.

It is the world’s first platinum level LEED (Leadership in Energy and Environmental Design) certified winery and was in fact “overdesigned” for LEED, said Boulton. It is so energy efficient, naturally regulating its own temperature for example, it gained three points by not actually doing anything.

Speaking to the drinks business later, Boulton explained this was a winery that could be placed almost anywhere in the world and still function exactly as it should.

What’s more he said that wineries need to be more honest in “admitting” how much carbon dioxide they produced, active in combatting it and not just sell on credits for someone else to off-set.

In addition to making carbon negative wineries, Boulton suggested the wine industry supported international carbon trading schemes, established “comprehensive” calculators to determine CO2 emissions from fermentation, accept at least “partial ownership” of carbon emissions not just selling credits, fund research projects to look at further ways to sequester CO2 and join forces with the brewing and distilling industries who also are, can and should be looking at carbon capture, especially given their facilities are operating on a far more regular basis than most wineries.

In addition, Boulton raised the point that there is now, finally, a ready market for carbon. The price in California has risen threefold in the last three months.

By capturing carbon given off during fermentation, which is also, it is worth noting, the “richest concentration of CO2 anywhere in the world”, not only can wineries become one less problem to the problem of too much carbon in the atmosphere but can actually be financially recompensed for doing so.