The ad is the 41-year old actor and wrestler’s latest in a string of collaborations with the San Francisco vodka company.

John Cena was named as a brand ambassador to SKYY Vodka last month, and has repeatedly appeared in its “Proudly American” campaign.

In his latest appearance, he recreates the famous ‘king of the world’ moment from James Cameron’s 1997 film Titanic while sharing his ‘thoughts’.

Cena wasn’t known for his comedic acting until 2015’s Trainwreck, where he played the beefed-up but sensitive boyfriend to Amy Schumer’s protagonist early in the film.

Since then he has appeared in a number of comedies, and this advert is just another example of his comedic talent, while also staying true to his wrestling persona as a patriotic American.

Cena has previously appeared in three other videos for SKYY as part of its “Proudly American” campaign, which celebrates the spirit of bold Americans and is rooted in SKYY’s belief that diversity drives progress.

The partnership between Cena and the vodka company was announced in November and he was immediately put to use in this campaign, which began in June.

The campaign, and its videos, juxtaposes iconic American phrases from the country’s history like “Home of the Brave”, with images of Americans from diverse backgrounds breaking the mould and pushing themselves. 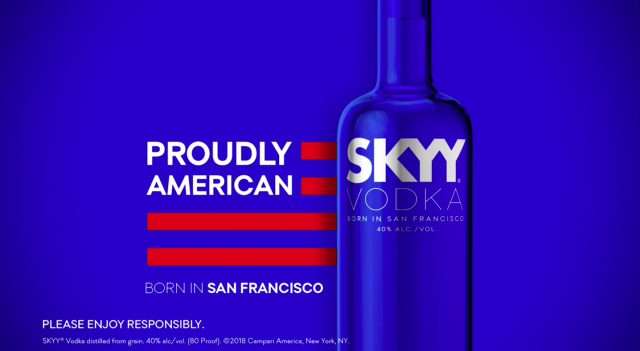