The UK imports more beer from both within and outside the EU than any other country in Europe, according to new data from The Brewers of Europe’s annual market report. 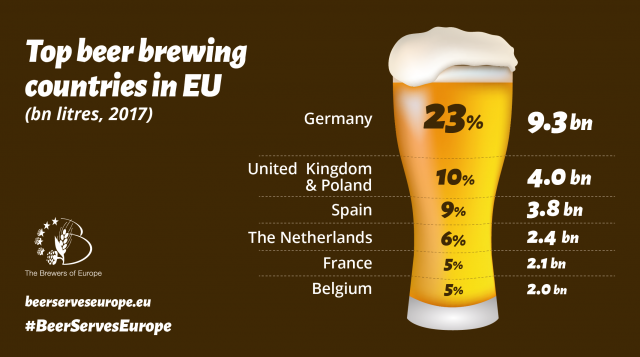 The report, which examines the overall production, sales and consumption of beer in Europe, found that while Britain is home to the most breweries of any country in the region, brewing 10% of all of Europe’s beer, it also buys in the most beer from overseas. The vast majority of those imports come from within the European Union.

British pubs, bars, restaurants and retailers bought more than 1 billion hectolitres (hl) of foreign beer last year, around 87% of which was sourced from inside the EU.

Europe’s beer production rose to an eight-year high in 2017, according to the data.

Germany, unsurprisingly, is the biggest producer, churning out more than 9.3 billion hl last year. The UK followed in 2nd place, tied with Poland, with almost 4 billion hl brewed in 2017.

The report comes as beer sales rose by 4.4% in the UK this year, according to the British Beer and Pub Association (BBPA)’s annual Beer Barometer report published on Monday.

Sales in the off-trade rose by more than 7%, while the on-trade saw its first rise in beer sales in more than 15 years.

“Obviously we were helped by the good weather,” Brigid Simmonds, head of the BBPA, told the drinks business, “but I do believe this is a positive sign for UK pubs.”

However, Simmonds warned that Britain’s on-trade need “greater certainty” from the government ahead of the countries departure from the European Union.

“The Chancellor’s decision in the Budget to freeze beer tax and lower business rates for thousands of pubs will make a huge difference to the viability of the sector moving forward, but Brexit looms large though and brewers and publicans alike need certainty.”

“Clarity on the transition period from March 29th onwards and a strong steer on the future relationship with the EU would be a boost to the trade and beer sales.

“A no deal Brexit should be avoided at all costs.”