Global wine brand Tussock Jumper considers adding an English fizz to the mix, with a label featuring a bulldog in a red sweater. 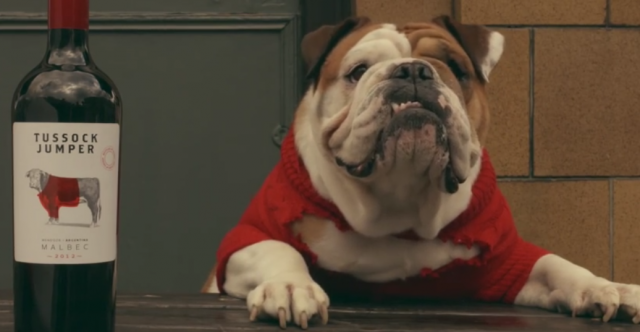 The brand sources wine from around the world, signifying the country of origin with the emblematic animal of each nation, always in a red jumper.

With a sheep for New Zealand Sauvignon Blanc and a bull for Spanish Tempranillo, co-founder of the brand, Gert-Jan van Arkel, told db at an event last week that he would like to add an English sparkling to the range – and has chosen a British bulldog to represent the wine.

He has even commissioned an amusing mini-video in partnership with Amazon as part of a digital campaign to promote the wine – which can be viewed here – although he has yet to go ahead with the product, or find a partner to provide the fizz.

Tussock Jumper was founded in 2009 and today sells as many as three million bottles per year worldwide with 21 wines in the range, all of which are bottled at source.

The brand has, however, yet to penetrate the UK market, but it is thought that the addition of an English fizz might be one route to bring the label to British consumers.

At the moment, the only sparkling wine in the line-up is a Prosecco, featuring a fox in a red woollen jumper on the label.

As previously reported by the drinks business, Tussock Jumper has brought ‘wine to life’ with an augmented reality (AR) app, allowing any consumer armed with a smartphone to activate the animals that feature on each of the 21 different wines in the Tussock Jumper range.