Chicago brewer Goose Island is opening a brewpub in Shoreditch this month, metres away from Brewdog’s own bar in the area, timing the launch with the release of cult-beer Bourbon County Stout. 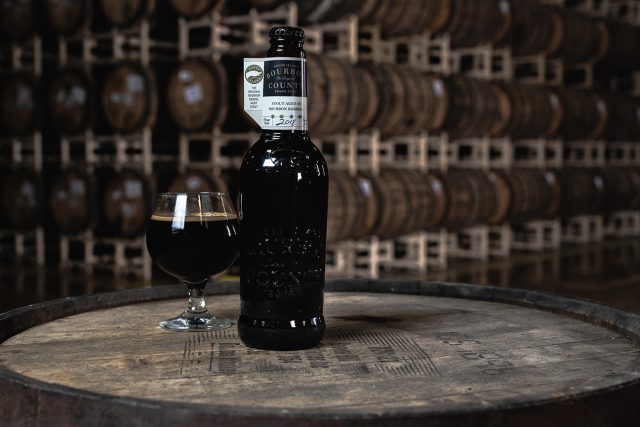 The 16.9oz bottles will retail for £20 at: Kill the Cat in Shoreditch and Ghost Whale in Brixton from 11am on Friday 23rd November, the day the brewpub launches, and will be available to purchase online from Beerhawk from 1pm GMT.

The beer, which is aged for around 12 months in four-year-old Heaven Hill Bourbon barrels and comes in at 14.1% ABV, was first brewed by Goose Island in 1992. Since then it has garnered a cult following of craft beer enthusiasts who have been known to queue for hours to get their hands on, while bottles regularly sell out online minutes after release.

Goose Island’s barrel ageing warehouse isn’t temperature controlled, so that the special brew is “exposed to the full range of temperature fluctuation.

Traditionally launched in the US on Black Friday, the stout will retail for £20 in the UK.

It will also be available on-tap at the brewer’s Shoreditch site when it opens on 23rd November.

The AB InBev-backed bar is located on a site on Great Eastern Street that was previously occupied by dim sum & cocktail bar Drunken Monkey, which closed earlier this year.

AB InBev bought Goose Island in 2011, kicking off an “acquisition era” which has seen a large number of beer giants like Heineken and AB InBev investing in US and UK craft breweries.

The bacteria in the bottles causes sour off-flavours to the develop in the beer. Following the discovery, in 2016, of the contaminant in Goose Island’s 2015 Bourbon County Brand Stout beers as well its Bourbon County coffee stout and barleywine, the company undertook a voluntary refund programme, offering compensation to those that had purchased faulty bottles.

After the refund period had elapsed, in February 2017, Scott Kaplan and Jeff Roach claimed that they had been unable to claim their full refunds and sued Goose Island. They claimed the refund programme was “underpublicised and available for an unreasonably short period of time.”