Liv-ex’s benchmark index, the Fine Wine 100, took a 0.7% dip in October as the market continues to falter in the second half of the year, even as the exposure on the Exchange hits a new high of £50 million. 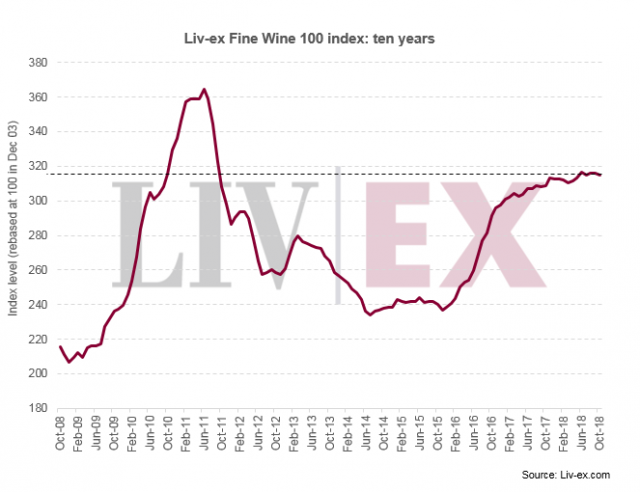 There was some good activity for Armand Rousseau’s 2015 Chambertin (up 9.9%) and 2015 Chateauneuf-du-Pape in the shape of Clos des Papes and Beaucastel (up 4.9% and 3.9% respectively), as well as the 2014 La Tâche from Domaine de la Romanée-Conti and the 2005 Cos d’Estournel which rebounded after declining in September.

Regressing in October was a mixed bag of 2004 Krug, the 2014s from Napa labels Opus One and Dominus and Domaine Ponsot’s 2015 Vieilles Vignes Clos de la Roche. The biggest faller of the month was Domaine Leflaive’s 2015 Chevalier Montrachet.

After running flat in August and barely moving in September, October’s performance will likely be a drag on the index which has been running flat this year. Not wildly off-pace perhaps but definitely limping along.

Then again, late last month Liv-ex also reported that the exposure on the Exchange – that is to say the total value of bids and offers – had hit a new high of £50m, having almost doubled in the last three years and an increase of some £6m since last October.

Although the Fine Wine 100 appears to be a little stagnant, the bid:offer ratio is currently 1.09 and as a ratio of anything over 0.5 is considered an indication of an uptrend or at least price stability, this seems at odds with the state of the FW100.

On the other hand, as Liv-ex mentioned, the market is growing and ever-broadening, with a record number of different wines trading. No doubt when the results of the Fine Wine 1000 last month are published next week the picture will be rather more in line with this news.