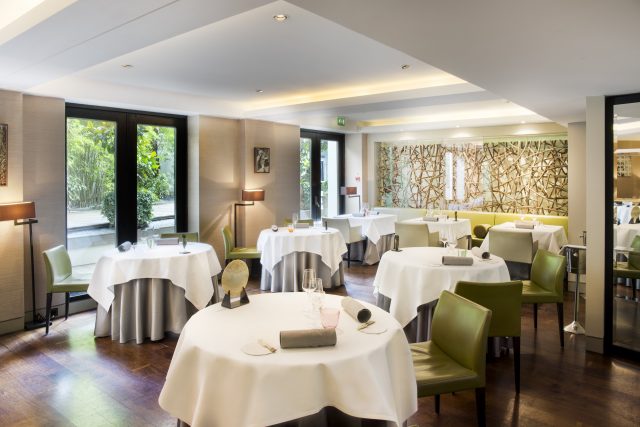 The concept: Mere minutes from the hullabaloo of Green Park, the journey to The Greenhouse is an adventure in itself.

To get to the Mayfair restaurant, which has retained its two Michelin stars since 2004, you have to cross a quiet mews, which, in the stillness of the twilight, is almost haunting. I listen out for the clip-clop of hooves but the air is silent.

At the end of the muse you’ll find a landscaped garden fecund with foliage. Follow the wooden path and soon you’re cocooned inside the restaurant’s tranquil dining room, where the tables are spaced a polite distance apart. To keep service personal, the number of covers per night is capped at 40.

The Greenhouse is the jewel in Lebanese restaurateur Marlon Abela’s crown, who also counts The Square, modern Japanese Umu and Morton’s Club among his assets.

The décor: With a no music policy and a neutral colour scheme, the restaurant is so peaceful it’s almost eerily quiet, making me self-conscious of my volume levels, though this soon dissipates as other diners trickle in. By 8pm the room is full and buzzing with animated chatter, which comes as a pleasant surprise.

The Greenhouse makes no secret of the fact that it’s a formal fine dining restaurant with starched linen tablecloths and waiters that skulk in the shadows, waiting to sweep up fallen crumbs.

In many ways its old fashioned approach seems delightfully anachronistic, as Londoners move increasingly towards casual dining experiences, but there is still a place for traditional fine dining establishments in the capital, and The Greenhouse is among the best of the old guard.

The food: The kitchen had reason to celebrate on the night of my visit, as Michelin had just announced its stars for London for 2019, and, despite losing its logngime head chef Arnaud Bignon, The Greenhouse retained its two star status.

Breathing new life into the venue is executive chef Alex Dilling, who joined this summer from Hélène Darroze at The Connaught.

Rather than reinventing the wheel, Dilling has put his own stamp on the dishes, which shine a light on seasonal British produce and are often heart-stoppingly beautiful.

The trio of amuse bouche before the main event were playful and fun – a white chocolate globe exploded to reveal sweet tomato gazpacho, while hidden beneath charcoal black crackers were smooth smoked eel rillettes.

The minimalism of the tasting menu is frustrating at times – incredibly complex dishes are distilled into a word or two: ‘foie gras’, ‘cep tart’, ‘turbot’, which undermines the effort that goes into them.

Most diners don’t want to be bored by a shopping list of ingredients, but it would be useful if they were printed on the menu to refer back to.

Signature dishes: Among the most joyful things I eat comes early on in the evening. Electing to explore Dilling’s eight-course tasting menu, the very first dish, an indecently creamy smoked sturgeon mousse loaded with crab and fresh flecks of dill, is utterly delightful.

Rich and decadent, the flavours are confident and punchy and the overall experience so comforting, I shut my eyes in the pure pleasure of it all.

Another triumph was a dainty foie gras dish that gives Heston’s famous meat fruit a run for its money. Formed of two glistening globes, hiding inside is a rich, creamy, Armagnac-laced parfait lifted by dots of lemon thyme jell.

Winning the prize for the prettiest dish was a tiny cep tart fashioned from frills of pastry that was so dainty, it looked like it belonged in a dolls house. Served with a decadent aged Comté sauce, the nutty, buttery, earthy ensemble captured the comforting flavours of autumn.

Not all dishes hit the mark however. A delicate bone white sliver of turbot was overpowered by a daub of intensely meaty boudin noir, while the roast grouse with Piedmont hazelnuts and pink peppercorns was on the funkier side of feral.

The drinks: The Greenhouse boasts one of the largest wine lists in London, which is presided over by the ebullient Elvis Ziakos (yes, he really is called Elvis).

With a 120-page list stretching to over 3,500 bins, Elvis is particularly fond of Burgundy, which is shown a lot of love due to its versatility with food. Big names like Armand Rousseau, Domaine Dujac, Sylvain Cathiard and Domaine de la Romanée-Conti are present and correct, but you’ll need to splash out for them.

We began our feast in style with golden glasses of Krug Grandé Cuvée, which rewarded with notes of lemon curd and grilled hazelnuts, its astute balance of power and elegance reminding me why the Champagne is so lusted after.

The most harmonious wine match of the evening was the nutty Clairette from the Southern Rhône Elvis poured to enjoy with the cep tart. Made from gnarly old vines planted in the 1870s, the unctuous barrel-fermented drop sang with notes of macadamia nut, apricot, fennel and peach.

I was heartened to see a Mencía from Monterrei make it into our glasses, which charmed with bright notes of raspberry, cherry and herbal hints.

Who to know: If you’re a wine lover, seek out Elvis, who will happily relieve you of the task of having to wade through 120 pages of wine to unearth a gem.

Don’t leave without: Trying one of the pretty puds. On our visit, we were treated to the entire dessert trolley, which included a cloud-like Chartreuse soufflé; a boozy, lemon-scented rum baba; a super sweet concoction involving coconut and popcorn; and a daring dessert featuring avocado and Granny Smith sorbet.

Last word: Maria O’ Loughlin, the undercover critic for The Sunday Times, recently gave The Greenhouse a damning review, dubbing the service “an idiotic pantomime” of “whispering and glaring” that left her and her guest feeling like “unwelcome plebs”.

My experience was entirely different. Yes, the service is old school in that you’ll notice waiters hovering close by to cater to your every whim, but if you’re forking out £155 for the tasting menu without wine you expect to be well looked after.

It’s easy to pop shots at traditional fine dining venues, but they still have a place in London’s diverse food landscape. The Greenhouse isn’t for everyday dining, it’s for extra special occasions. While the service may be formal, the atmosphere is jovial, and the buzzing room spoke volumes about its enduring popularity.

New chef Alex Dilling says he aims to create food that “sparks joy”. His caviar dish alone is testament to that, and there were many more joyous moments throughout the meal.

Dinner at The Greenhouse doesn’t come cheap, but if you’re after an elegant and exciting fine dining experience, you will be richly rewarded.

Click through for pictures of some of Alex’s Dilling’s other pretty dishes.