Australian bartender Orlando Marzo has won the Diageo World Class Bartender of the Year 2018, seeing off competition from 55 of the world’s top bartenders, Diageo announced this week. 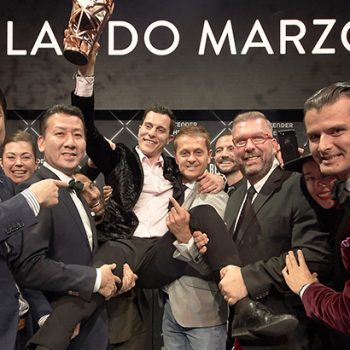 The Italian-born Marzo is the bar manager of Melbourne’s Lûmé and triumphed after competing in a series of rounds in Berlin on 5 October, including the Ketel One Better Drinking Challenge, Johnnie Walker Flavours of a Nation Challenge, the Ron Zacapa Before and After Challenge and the Tanqueray Search for a Signature Challenge and Cocktail Clash ’18 Challenge.

The bartender particularly impressed judges in the Before and After challenge and the final round, Cocktail Clash.

Diageo Global Cocktailian and World Class judge, Lauren Mote, said: “All the finalists brought their A game, but Orlando really was on another level.

“The Zacapa aperitif he made for the ‘Before and After’ challenge was one of the best I’ve ever tasted and the way he held his nerve in the ‘Cocktail Clash’ finale – for me, that’s the mark of a truly WORLD CLASS bartender.”

Marzo added: “Just being here, competing alongside the best bartenders in the world, judged by some of the most iconic names in the business was a once-in-a-lifetime opportunity, but to actually win? I’m still in shock.”

“I couldn’t have done it without the support of my amazing team back home – they’ve cheered me on every step of the way!”