Pietras took up the position of director of wine at the hotly anticipated Hide restaurant in April, overseeing a well-stocked on-site cellar, with access to the 6,000 plus lines available at its sister retail site, Hedonism, which can be couriered to a guest’s table in under 15 minutes. Originally from Kołobrzeg in the north of Poland, Pietras, developed an interest in wine at a young age and went on to complete a degree in hotel management. Starting his career near his home town in the Sheraton Poznan Hotel, Pietras moved to the five-star City Park Hotel & Residence, taking on the role of head sommelier. Given control of the cellar and wine list, Piotr developed it to become one of the biggest and most diverse in Poland. He moved to London in 2013 to follow his passion, taking on the position of assistant head sommelier at Corrigan’s Mayfair, before moving onto the Michelin-starred Maze by Gordon Ramsay, then head sommelier at Launceston Place in 2015, and as director of wine at Hide in 2018. Here, the former footballer reveals a love of cider, how he has his wife to thank for putting him on the path to becoming a sommelier, and why a Syrah from New Zealand would be his top pick from Hide’s extensive wine list. 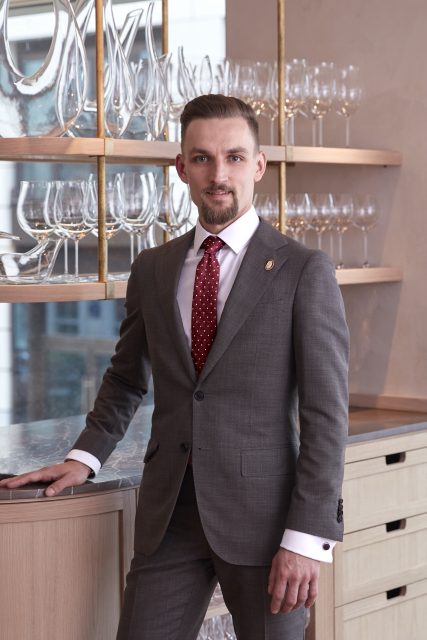 It was actually my wife who mentioned a magical, strange-sounding word ‘sommelier’ referring to her colleague. I was curious and did my research to find out what such a person does in a restaurant. Then, Tomasz Kolecki and Piotr Kamecki (Vice-President and President of Polish Sommeliers Association) had big influence on my first steps, showed me the direction and supported. Finally, in the UK it has been various sommeliers I met and other people I was surrounded by every day at work that gave me a little bit of something. It all made me who I am professionally today.

Meeting customers, suppliers/winemakers, my sommeliers and colleagues. They give me energy and inspiration. Hospitality is all about people and relationships – that is why I am part of it.

Some think we only travel, taste and pour wine…There is so much more about the role. From cellar management, staff trainings, wine & food pairings sessions with chefs, through selecting and ordering contextually suitable wines up to advising, selling and helping make a restaurant profitable. On the top of that, we do study every day before or after our shifts to get our knowledge up-to-date.

I became a huge fan of ciders. The ones from Eric Bordelet would be my first choice.

New beginnings always bring some tough moments. One evening, having two bottles of white wine in the same ice bucket, I started to top up glasses with the second bottle -– an expensive one – which belonged to another table from my section, miserably mixing two different wines. Both couples saw it. This was an embarrassing moment really. Luckily, we managed to sort this situation out.

If you could give your younger self advice when starting out as a somm, what would it be?

Honestly, I would have said to myself to take all the experiences as they are. No matter whether they are good or bad they bring lessons, help us grow and make us who we are. Just follow your intuition, believe in yourself and take it easy.

It was Winkeler Jesuitengarten Riesling Spatlese Trocken from Weingut Allendorf. It tasted totally different than any other wine I had tried by then. Aromas, complexity, length. Different league.

A 12-day visit to Australia organised by Wine Australia. It coincided with The World’s 50 Best Restaurants 2017 event in Melbourne. We visited three states and their key regions, tasted some crazy wines, met super-friendly, enthusiastic winemakers and, importantly, connected with other sommeliers from around the world to talk about wine, life, their restaurants. Unforgettable trip. Kudos to everyone who put the event together.

I am not annoyed by my customers’ habits. There is one exception, though when a host – in front of his guests – tactlessly tries to confront you, test you. That’s when you need to show diplomacy skills at their best.

It would be in Priorat. A small, spirited region with beautiful scenery, far from the crowds. Love the place and I am always impressed by its wines.

Most likely a sports manager or nutritionist, especially having played football for 14 years. I was not skilful enough to make it to the top, but these are possible areas that could have attracted me, if wine hadn’t caught me 🙂

Michael D. Higgins, President of Ireland. During the UEFA Euro 2012 in Poland, he and his wife stayed in our hotel and dined with us every day. Their national team lost all three group matches. After the last one, they came straight back to the hotel and were so broken-hearted that, instead of their regular meal and a glass of Clos Henri Sauvignon Blanc, they just ordered a cup of cocoa, contemplating for an hour or so.

What makes you most proud to be a sommelier working in London?

Loving Syrah variety, it is Jaboulet’s 1961 La Chapelle Hermitage. I would also be keen to taste one of d’Yquem from the late 1800s.

Finally, what wine and paired plate would you pick from your list and why?

I would pick Kai Schubert’s 2007 Syrah from Wairarapa, New Zealand. Roast veal sweetbread with smoked almond praline (from HIDE Ground menu) is the perfect plate to pair with this beautiful wine. Its intensity, freshness and slightly spicy character work really well with the dish. I often recommend it to our guests, not only because of the matching itself, but also to show how well New World wines can age and what a great value they are!