English wine producers are on course to produce their best and biggest vintage ever, following an extended period of hot, dry weather in the UK. 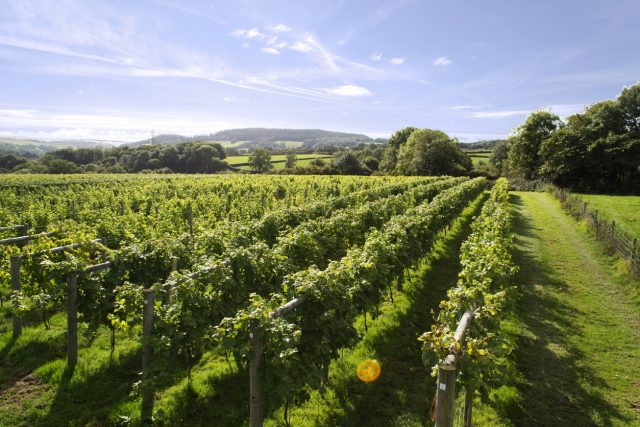 With unusually warm and sunny conditions across the UK throughout June and early July – which are set to continue for at least another week – English wine growers are excited by the prospects for the 2018 vintage, with some predicting that it could be the country’s greatest harvest ever.

Speaking to the drinks business on Wednesday this week, Stephen Skelton MW, consultant viticulturist for a number of English wine producers, said that the start to the growing season has been unprecedented in terms of quality.

“It’s the best I’ve ever known it… the size of the flowers was very good so we will have big bunches and an early harvest, maybe up to two weeks early for some varieties, and disease pressure is very low at the moment,” he said.

Continuing, he observed, “So a lot of boxes have been ticked this year already; it should be exceptionally good volume- and quality-wise.”

When asked to compare the conditions so far to previous vintages, he said that 2018’s harvest could be like 2006 in terms of yield, which was the English wine industry’s highest on record, and in terms of quality, it could be like recent great vintages 2009 and 2014, “if not higher – it could be the best year we’ve ever had”.

Similarly, Bob Lindo at Camel Valley, in the far south west of the UK, told db yesterday that he has never seen such a good start to a vintage, and he’s been making wines in Cornwall for just shy of 30 years.

“There’s a way to go, but it’s probably the best start to a year I’ve known,” he said.

“We’ve had no frost and 100% fruit set and we are early – we are expecting a September harvest start,” he added.

When asked by db what could damage the quality potential in the berries for 2018, he said that his only causes of concern were drought and possible hail, primarily for their affect on yields.

However, referring to the issue of precipitation, he said that Camel Valley were “lucky”, with two hours of rainfall on Sunday, after which he said, “you could see the grapes get bigger”.

Commenting more generally, he said that his location in the west of Britain was “the worst place to be in the worst years, but, in the best years, it is the best place to be,” suggesting that this vintage would favour his site over eastern parts of the UK, which are more reliable in terms of yields.

As for a producer in the east of the country, Kent’s Chapel Down – which is the largest producer of English sparkling wines in the country – has also enjoyed better conditions than ever before.

“As an industry we rely very heavily on the good Lord, and we realise he is a pretty unreliable partner, but this is the best I’ve ever seen in 18 years,” said Frazer Thompson, CEO at Chapel Down, speakling to db this morning.

“The flowering has been completely uninterrupted and early, and the bunches look regular and superb, and the forecast is also good,” he continued, referring to a predicted heatwave over the next few days.

Meanwhile, Steven Spurrier, who has the Bride Valley vineyard in Dorset, and has previously expressed his concerns over the quantity of grapes he has been able to harvest in recent vintages, was notably upbeat.

During a telephone interview with db yesterday, he said he was a “happy bunny”, noting that the conditions this year were so good that he was considering planting a further two hectares at his estate, as well as making a barrel fermented red and white wine from the harvest.

“Six weeks ago we had hardly any bud burst, but now the flowering is just about over, and it looks fantastic, it is just what the Bride Valley wants, and indeed all the English wine industry,” he said.

Recording that some cold spots in early May had placed his vines around 10 days behind, because the weather since mid-May has been so good, the vines are now one week ahead in terms of forecast harvest start dates compared to the average.

“This year our vineyards are looking marvellous,” he stated.

Significantly, he said that projected yields at Bride Valley were good.

“In 2014, which everyone admits was the greatest vintage in quality and quantity that English sparkling wine industry had ever had, we made 25,500 bottles from 30,000 vines, so about two thirds of a bottle per vine… This year I hope to make 30,000 bottles from 42,000 vines, and if we make that, I’ll be a happy bunny,” he commented.

However, looking back, Spurrier expressed his concerns over the levels of production at his site near the coastal town of Bridport in Dorset.

“Over the last six vintages we have averaged just under one quarter a bottle per vine, and not even Romanée-Conti can survive on that… half a bottle is acceptable, but what we are really aiming for is three quarters a bottle per vine,” he said.

While adding that his vineyard has proved a “longer term investment that I had planned, I am very pleased we planted a vineyard, and I believe that it will all turn out well this year.”

Indeed, Spurrier told db that if the vintage proves as good as hoped, he will plant further vineyards in addition to his existing 10ha.

“If this year gives me the confidence to plant, then I will plant another two hectares, but no more,” he said, commenting that his vineyard manager could manage 12ha, but nothing larger than that.

He also said that 2018 could produce his first ever still wines.

“If this year turns out to be fantastic, then I will ask Ian Edwards [who is the winemaker at the neighbouring Furleigh Estate where Bride Valley wines are vinified] to make a barrel of Pinot Noir and a barrel of Chardonnay – so in two-three years time you may be able to drink a Spurrier Pinot and Chardonnay,” he said.

Such a forecast result is in sharp contrast to previous recent harvests at Bride Valley, with the 15, 16 and 17 vintages each yielding fewer than 10,000 bottles, according to Spurrier.

While he has previously said that he is “angry” and “worried” about the challenges of creating a commercially-viable English sparkling wine business from his site in Dorset, after this year’s “marvellous” start to the growing season, he said that he is “optimistic”.