South African government-run conservation organisation CapeNature has confirmed that it has issued Constantia Valley wineries with hunting permits to kill up to two baboons a day as a last resort, after non-lethal methods of controlling the primates have proved unsuccessful. 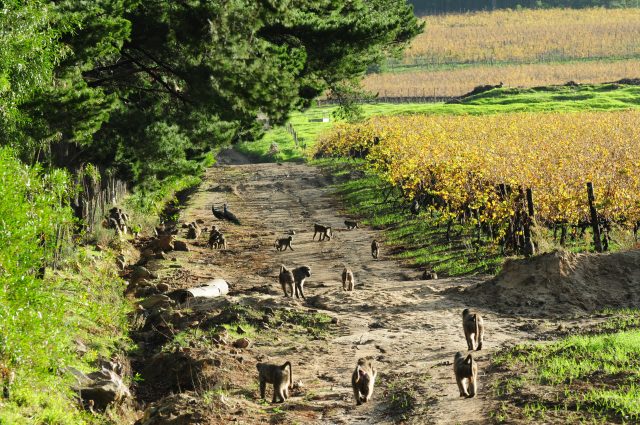 The permits have a limit of two baboons per day and are valid from October 2017 to October 2018. Local media has reported that an estimated seven baboons have been killed so far.

Owner Lars Maack, posted the following statement on the company’s website: “I would like to state that we have no interest in harming baboons and believe our numerous efforts from preventing the animals entering farmland via electrified games fences and our own baboon rangers in the field have saved them from potential harm in the suburbs. Our aim is to assist in keeping them in their natural habitat”.

Maack had told Constantiaberg Bulletin that he had applied for the hunting licence to protect his “staff, residents and animals” as well as his vineyards.

“We’ve had some horrific and repeated attacks on our dogs and other animals,” he added.

CapeNature spokesperson Marietjie Engelbrecht said it was the first time that wine producers in the area had been issued hunting permits for baboons.

“The applicants could prove that they have implemented multiple non-lethal mitigation measures over a number of years to try and prevent the continued damage to vineyards and infrastructure without success. And they have experienced extensive losses,” she said.

Like Buitenverwachting, Klein Constantia has also adopted a number of different measures in order to attempt to keep the baboons out.

These include an a virtual fence – a measure that uses coordinates, wireless technology and sensors to control the location of the animals – as well as bear bangers, paintball guns and three ‘baboon monitors’ who work seven days a week.

Speaking to Constantiaberg Bulletin, vineyard manager Craig Harris estimates that the total cost of non-lethal baboons defences came to around £25,000 a year, with an additional £1,400 spent on the virtual fence with little success.

He told the news site that the winery had changed their cover crops to bitter lupins in attempt to ward off the baboons, but this hadn’t worked either.

Harris stressed that they’d only applied for the permit as a last resort, adding: “Baboons should be on the mountain, but instead they raid the farms and are healthy and multiplying. The more of them there are the more food they need”.

Baboons have been known to feed on vine buds in the spring, as well as grapes when they begin to ripen. Scientists are still yet to understand why some baboons conduct raids while others do not.

Speaking to News24, Professor Justin O’Riain, director of the University of Cape Town’s Institute for Communities and Wildlife in Africa, added: “The local vineyards in Cape Town have invested hugely in game fencing and aversive conditioning for many years as non-lethal options to prevent baboons from damaging their crops and infrastructure.

“Unfortunately, baboons are the most artful of all dodgers and successfully overcome most deterrents”.

A report conducted by the City of Cape Town found that the baboon population on the Cape Peninsula had risen from 179 in 2012 to 253 in 2017. The city has invested almost £685,000 in non-lethal baboon deterrents to-date.

It is believed that baboons are on the prowl due to a number of factors, including the wildfires of 2015 which destroyed much of their natural habit, the removal of trees such as pines which are a food source for the primates, and the current drought in the Western Cape which began in 2015.

With some consumers calling for a boycott of wines from producers involved, a spokesperson from Wines of South Africa told the drinks business: “This is an incredibly sensitive situation and there is clear understanding of the opinions, positions and actions of all parties involved. We as SA wine industry believe that all of the interest groups, legal entities and specialists in this particular field have been involved and they have the full knowledge, information and understanding of each individual case in order to have been best informed to make the most educated decisions around the issue.

“We also believe that the set standards and legal regulations are in play. We can only trust and believe that all articles relating to this case, along with social media comments and attention will be viewed from all angles and that no rushed decisions and actions are taken in this regard, especially not with calls to boycott the purchasing of wine products of the entities involved.”

Responding to a number of the points raised in a Facebook post, animal rights group Baboon Matters stated: “I still don’t have a clear understanding of the sudden need to kill the baboons and it seems that the role players are merely intent on defending their positions, whilst little thought is afforded to the baboons’ position.

“The argument that “other farmers” also kill wildlife, and “other provinces” don’t require permits to kill wildlife is, in my opinion, a sloppy one. We are dealing with a situation here, on our doorstep, and it is unacceptable to think that just because other areas may behave in a less acceptable way, it is fine to let it happen here too.

“I cannot go along with the rather pessimistic outlook that we simply accept that “the vineyards tried hard” and should not be “victimised”. The baboons were killed with little thought to their predicament and social dynamic”.

Baboon raids can cause considerable crop losses for wineries, with raids suffered in the Franschhoek area making headlines in 2010.

Mark Dendy-Young, manager of La Petite Ferme, told Decanter at the time: “The baboons seem to know exactly when to eat these slowly ripening berries. A week before we are able to harvest they tuck in. They don’t seem to eat them green.”

He continued: “The problem has been worse this year as they eat two to three tonnes over a week, approximately 2000 bottles” or 40% of his harvest.

In addition, the winery was only able to produce three barrels of Chardonnay in 2010, compared to the usual 12 to 15.