As China’s thirst for Australian wines continue to grow, American consumers are apparently losing their taste for them, prompting Wine Australia to now “redouble” its efforts in the US market. 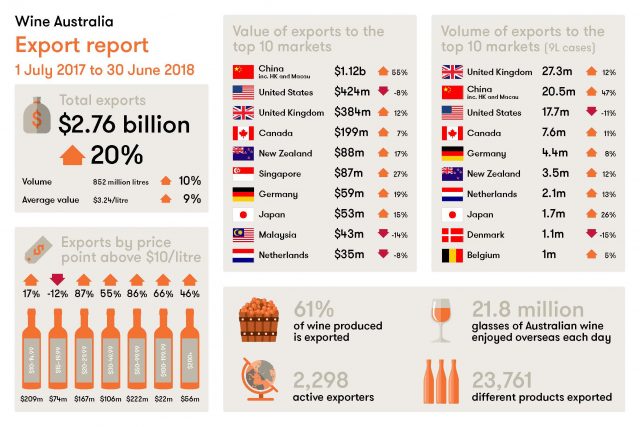 Australian wine exports in the past 12 months to June 2018 surged 20% in value to AU$2.76 billion, the highest rate of growth in 15 years, with a notable increase in the average export value at AU$3.24 per litre – the highest since 2009, according to the country’s wine organisation Wine Australia.

China remains the country’s most lucrative and most valuable export market over the past year. Exports to the country including Hong Kong and Macau grew 55% to AU$1.12 billion, accounting for 40% of Australia’s total export value.

Furthermore, from next year Australian wines exported to China are going to enjoy zero tariff starting from January based on the two countries’ Free Trade Agreement.

Exports to the US, however, declined both in value and volume. Its value dropped by 8% to AU$424 million, while its volume decreased by 11%. Despite the drops, the trade organisation pointed out the premiumisation of wines in the US market presents new opportunities for Australian wineries.

“Of our five largest markets, only one market – the US – didn’t grow in value last year. Importantly, the US is the world’s largest wine market and Australia has the opportunity to capture more of the premium end of the market as American consumers trade up to higher priced wines,” said Wine Australia CEO, Andreas Clark.

“The premium end of the US wine market is enjoying robust growth, as are Australian exports in nearly all price points above AU$10 per litre (albeit off small bases) and we’re working to accelerate this growth in demand through a marketing push supported by the Australian Government’s AU$50 million Export and Regional Wine Support Package,” he added.

The trade organisation has just launched the inaugural ‘Australia Decanted’ event in California, a four-day wine education programme to promote Australia’s fine wine sector. The event will become an annual fixture in the US, and will be followed by Aussie Wine Week and Aussie Wine Month in September which begin this year.

Overall, Australia’s wine exports during the past year showed an uptick in higher end wines. Wines above AU$10 per litre increased by 45% to AU$855 million, which is a “record value”, according to the trade organisation, mainly driven by wines priced AU$20-29.99 and AU$50-99.99 per litre.

Nearly all regions that Australia exports wine to increased in value in the past 12 months, with Northeast Asia having the stand-out performance, growing by 51% to AU$1.2 billion. Other regions that experienced encouraging growths included Europe (AU$608 million), Southeast Asia (AU$168 million), Oceania (AU$99 million) and the Middle East (AU$30 million).

North America was the only region to decline in value by 4% to AU$624 million, a AU$12 million increase in the value of exports to Canada only partially offsetting a AU$39 million decrease in the exports to the US.

The top five export markets for Australian wines during the period are China, the US, the UK, Canada and New Zealand.