Members of the wine trade and press gathered at Leonardslee Gardens in West Sussex for the planting of the first Pinotage vineyard in the UK yesterday, a nod to owner Penny Streeter OBE and the Benguela Collection’s South African connections.

Streeter, a Zimbabwe-born British/South African entrepreneur, purchased the Leonardslee Gardens estate, which comprises some 200 acres, in July 2017. The Pinotage vineyard will now form part of the Benguela Collection which also includes Mannings Heath Golf and Wine Estate (also in West Sussex) along with the Benguela Cove Wine Estate in South Africa’s Walker Bay, as well as four restaurants and a hotel on the Garden Route.

The new Pinotage planting, comprising 0.5 hectares, brings the Collection’s total area under vine in England to 16 hectares, planted with 66,000 vines.

Mannings Heath, three miles away from Leonardslee, was planted in 2017 with Chardonnay (60%), Pinot Noir (30%) and Pinot Meunier (10%). Benguela is aiming to produce 75,000 bottles annually, focusing primarily on English sparkling wine with a small volume of still red Pinotage, if the grape takes to the conditions. The first crop is expected in 2020 with the first wines are due to be released in 2023.

At the planting, Johann Fourie, cellar master for Benguela Cove both in South Africa and the UK, explained why he had chosen to experiment with Pinotage.

He said: “When myself and viticultural consultant Duncan McNeill were discussing all the struggles associated with growing grapes in the UK, I started to realise that Pinotage might be the answer to everything. That same day we started making phone calls and eventually sourced some Pinotage vines from a nursery in Switzerland.

“They’re Clone 48 which is the exact same clone that we use in South Africa, so I felt this was a good sign.

“The struggle in the UK is getting the grapes to ripen fully. As a variety, Pinotage accumulates sugar very fast and has a short growing season. Typically budburst is way after that of Chardonnay which means we virtually eliminate the risk of spring frost.

“After that, it has a quick, short growing season – indeed it’s the first variety we pick in South Africa.

“Pinotage grapes have thick skins meaning they’re less susceptible to rot, unlike its thin-skinned parent Pinot Noir. It is also very black in colour which means that the temperature within the berry is 6 to 10°C higher than the ambient temperature outside, which helps with ripening and tannin development.

“It also has a moderate canopy growth which is good as we have a slight problem with high vigour here”.

Despite his arguments in favour of the grape variety and its suitability for the UK, Fourie still acknowledges that what he’s doing is experimental.

“Having said all this, let’s see. Only time will tell – this is a test project so we’ll see what the vineyard conditions allow us to do”.

He believes that if successful, the resulting wine will be on the Pinot Noir side of the Pinotage spectrum with red fruit rather than black fruit flavours and aromas.

“The plan is to make a still red wine from Pinotage but if we’re unsuccessful then our back up plan is to add Pinotage to the base wine for our sparkling.

“If you look at the countries that have already planted Pinotage (Brazil, Canada, Israel, New Zealand, Australia, US (five states), Zimbabwe, Germany, Switzerland and South Africa) some of them have warmer climates, but others are cooler. Take New Zealand for example, they’re really starting to jump on the Pinotage bandwagon”.

Streeter also appears confident about plans at the two West Sussex sites and has attracted widespread praise from locals after having vowed to reopen Leonardslee Gardens to the public following its closure due to financial difficulties in 2010.

A winery is being built at Mannings while Leonardslee will also have a visitor centre and restaurant – one the chef hopes will one day receive a Michelin star.

Streeter added: “We are creating a very special visitor experience. People can enjoy beautiful English parkland and woodlands, now with wine tastings and pairings, good food and an entertaining events programme. Brits who have travelled to South African wine farms can enjoy the same friendly and relaxed wine culture just an hour by train from London, in exquisite countryside – and maybe a round of golf!

“If we can grow world class gardens at Leonardslee, think what we can do with a vineyard,” she continued.

Pinotage was developed in 1925 by Prof Abraham Izak Perold in South Africa with the crossing of Pinot Noir and Cinsault (also known as Hermitage in South Africa). Global plantings now total 7,000 hectares according to figures published in 2017.

Great grandson of Prof Perold, Gerhard Perold, attended the planting on Thursday and described the variety his relative created as being the “grape celebrity that most people want to meet”. 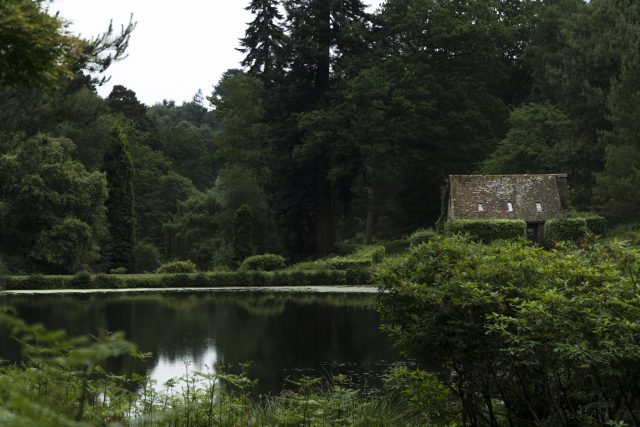 The Pinotage vineyard is part of ambitious redevelopment and restoration plans at Leonardslee which will see the Grade II listed, 19th century main house and outbuildings restored along with the Grade I listed gardens, lakes and woodland.

No maintenance work was carried out on the estate for eight years, requiring a team of 60 staff members, including 20 gardeners, to restore it to its former glory.

With almost 10,000 trees and shrubs, including 95 champion trees, and almost 10 miles of pathways, the project required considerable investment.

The estate includes woodland, parkland, seven man-made ponds with a colony of carp, a rock garden, two alpine glasshouses and a doll’s house exhibition as well as colonies of wallabies, wildfowl and deer. Pigs and chickens will also be joining the menagerie.

Known for its spring displays of rhododendrons, azaleas, camellias, magnolias and bluebells, the gardens were planted in 1801 and are due to reopen to the public again in January 2019.

Benguela Cove’s wines are available in the UK through a cellar door shop at Mannings Heath and to the trade via Bibendum.