As part of the project, Parra gave vintage rums aged between 37 and 45 years to six respected master distillers and winemakers in France and Scotland who each provided their distinctive finishing touches to the liquid.

The chosen winemakers and distillers involved in the 2 Masters project, who individually make: Scotch, Cognac, Armagnac, Champagne, Sauternes and Bordeaux, were allowed to finish the rums however they pleased.

Parra traveled to Europe to talk with each master, and together they set up the framework and the marketing plan for all the products. Each master would produce 3,000 bottles, but, beyond that, they would be on their own as to how they finished their rum and when they would release it. 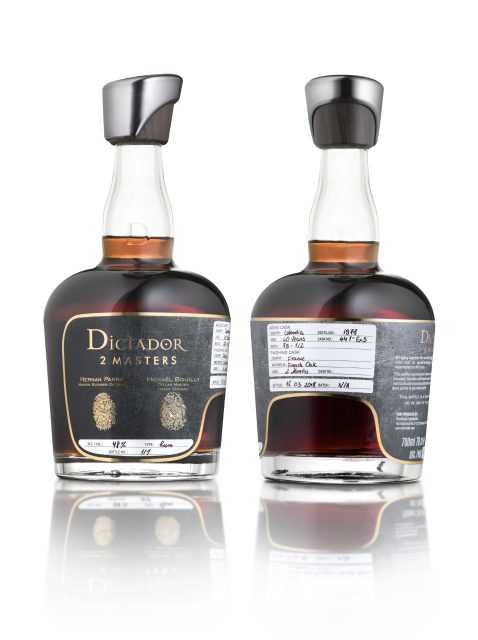 Two of these rare rums are being released in Europe this month, and all of them will be available in Europe and the US by the end of September. “My work is already done,” Parra said with a tone of satisfaction. “I gave them carte blanche and told them I didn’t want to interfere with their work.”

Parra says there are more masters series rums to come. Round two is in the pipeline with masters who produce Bourbon, mezcal, Tequila, saké, Port and baijiu.

Below are the six bespoke rums and their finishes:

Champagne Leclerc Briant (RRP: €500). Winemaker Hervé Jester took a 40-year-old Dictador rum from a 1978 single vintage cask finished for 36 months in Sherry casks and aged it for an additional four months in one of his second-year French oak barrels, which was lightly toasted. Bottled at 44% ABV.

Vignobles Despagne (RRP: €475). Bordeaux winemaker Thibault Despagne started with a 37-year-old Dictador rum from a 1980 single vintage cask finished in Sherry casks and aged it a further four months in one- and two-year-old French oak barrels originally used for his 2015 and 2016 Merlot/Cabernet Franc blends. Bottled at 45% ABV.

Glenfarclas (RRP: €900). A 45-year-old Dictador rum from a 1972 single vintage cask finished for 36 months in Port casks made its way from Colombia to Scotland, where Glenfarclas master distiller Callum Fraser aged it for another 11 months in a Glenfarclas 2002 third-fill Sherry cask. Bottled at 45% ABV.