The interaction of wine and phenolics from cork stoppers produces a newly-identified set of compounds that affect a wine’s colour and bitterness – and these are called Corklins. 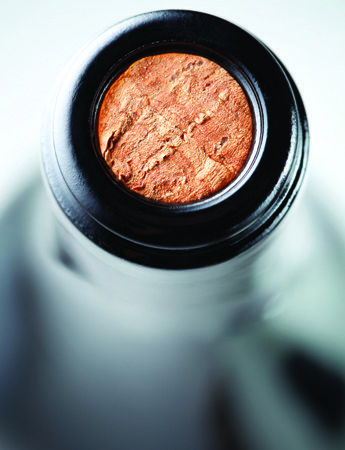 As the drinks business was first to report back in 2015, phenolic compounds that are naturally present in cork stoppers will migrate into wine in a linear fashion over time to form new compounds, and such compounds have been shown to reduce colour deterioration and astringency in wine.

Significantly, in a new development, they have been given the name Corklins, following a paper published in the Journal of Agricultural and Food Chemistry in September 2017.

Drawing db’s attention to the new name and the creation of these compounds was Amorim’s director of R&D, Dr. Miguel Cabral, during a discussion in Portugal on Tuesday this week.

He began, “Having studied the composition of corks we have found that there is a structural fraction and an extractible fraction, which contains phenolic compounds.”

Continuing, he stressed that such compounds, which include tannins, phenols and polyphenols, are the same as those found in oak barrels – cork is, after all, the bark of the cork oak (Quercus suber).

The passage of these compounds is of course far less significant from a cork stopper than an oak barrel, and Cabral told db that, over 35 months, a wine sealed with cork would contain less than one tenth of these extractable compounds compared with a wine in a barrel – although this will be even lower with agglomerated corks.

Nevertheless, it has been shown that, even at low levels, the phenols from the cork stopper will react with catechins and malvidins in the wine to form new and bigger compounds that will affect the colour and astringency of the wine over time, according to Cabral, and it is these larger tannin-derived compounds that have been called Corklins.

He also said that the humidity in the headspace of the bottle, at almost 100%, was high enough for phenolics to migrate from the cork stopper into the wine when the bottle was stored upright.

Furthermore, as previously noted by db, Cabral has observed different levels of extractable phenolics in cork, and is now working on a “big research project” with the University of Portugal to find out the capacity of different stoppers to release phenols.

Commenting that they are using Near Infrared Spectrometry to classify the cork stoppers from low to high, he said that a cooper such as Radoux is employing the same technology to grade oak staves according to the phenolics, specifically tannins, that will be released into the wine.

As also previously reported by db, a natural cork stopper will release tiny amounts of oxygen into the wine in the first 6-8 months after it is inserted into the bottle, and this comes from within the cells of the cork as it is compressed.

“When you put a cork stopper in a bottle, the cork is squeezed and the air in it will compress as much as it can and then try to escape, and some of it goes up and some goes down, and so the oxygen comes from the interior of the cork, and comes in [to the bottle] up to 6-8 months.”

He added, “The network inside a cork is complicated, with millions of cells, so the air escapes slowly and then less and less.” He also recorded that there is more oxygen in natural cork than micro-agglomerated cork, because the latter has glue in it, and it is therefore more dense, so less oxygen is released.

Significantly, the oxygen that is released during the first 6-8 months of a wine’s life in a bottle may influence the development of the wine several years later, said Cabral.

Indeed, it may facilitate oxidative reactions, which mean that a wine sealed with a cork stopper is less likely to develop in a reductive way, while the transfer of phenolic compounds may also positively influence the ageing process.

Of course such elements are mostly relevant to fine wines, but such discoveries are starting to help explain why many winemakers believe that a high-grade natural cork stopper is the best way to seal a wine destined to age and develop over several years in the bottle.

An extract from the paper in the Journal of Agricultural and Food Chemistry, September 2017, can be read below:

“Overall, the reactivity of the compounds extracted from the cork stoppers to wine model solutions containing (+)-catechin and/or malvidin-3-O-glucoside was evaluated. This yielded new compounds, namely, pyranoanthocyanins, xanthylium salts, (+)-catechin dimers, and a new family of ellagitannin-derived compounds. The full structural characterization of this latter named as corklins and studies performed in model solutions revealed that these compounds result from the interaction between the components of the cork stopper and ethanol of the wine solution and (+)-catechin. It is known that the referred compounds that were described previously in wines may have an impact on the wine quality.”