Dutch premium vodka brand Ketel One has launched a ‘Botanical’ range of vodkas made from Ketel One that is re-distilled with botanicals in copper pot stills then infused with fruits. 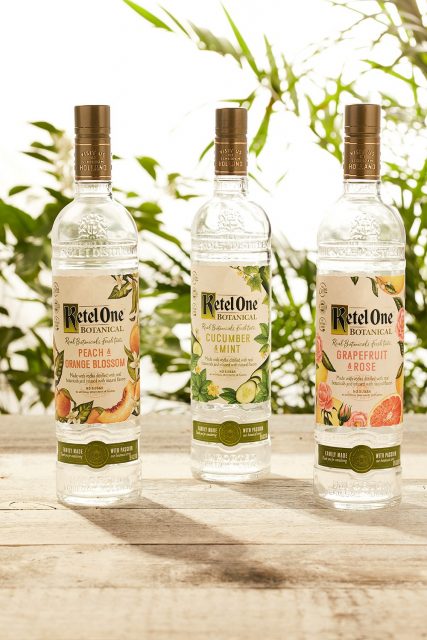 Called Ketel One Botanical, the initial three offerings are: Peach & Orange Blossom, Cucumber & Mint and Grapefruit & Rose, which go on sale this month in the US.

The Diageo-owned company is hailing the range as “a first-of-its-kind vodka,” combining the use of botanicals in distillation followed by the infusion of natural fruits and botanical essences.

The production process begins with Ketel One vodka that is re-distilled with a proprietary blend of botanicals in small-batch copper pot stills, and then infused with fruits and more botanicals.

“Just as our father redefined the possibilities for vodka with the exceptionally smooth crisp taste of Ketel One Vodka, we believe Ketel One Botanical sets a new standard in spirits,” his brother and co-distiller Bob Nolet added.

Each offering is 30% ABV, touted by the company for its fewer calories, and will be marketed with an rrp of $24.99 per 750 ml bottle, which are clear and embossed.

Ketel One is jointly owned by the Nolet Group, based in Schiedam, Holland, and London-based drinks giant Diageo. The Ketel One brand is owned by Double Eagle Brands.

The Nolet family, which has been in the spirits distillation business for 327 years, is touting Ketel One Botannical as a health-conscious, relatively low in alcohol, non-GMO product with no carbohydrates, artificial flavours, added sugars or artificial sweeteners.