London saw the official unveiling of a new fine wine and spirits retailing space this week – and it’s so impressive, a new benchmark has been set.

The shop can be found within the basement of Harrods, and follows a “multi-million pound” investment, first revealed by the drinks business back in July 2017, that forms part of a wider overhaul of the department store’s food and drink offering dubbed ‘The Taste Revolution’.

The just-opened wine and spirits area is a beautiful and original space, that puts London at the forefront of luxury drinks retailing.

The overall appearance of the shop, thanks to designer Martin Brudnizki, is elegant, glamorous as well as cosseting, and has been inspired by the sort of Art Deco opulence captured in The Great Gatsby, the head of wines and spirits at Harrods, Edward Gerard, told the drinks business at an opening party on Wednesday this week.

Brudnizki – who was responsible for the look of famous restaurants such as The Ivy and Sexy Fish – was cherry-picked by the department store to take on the project, which represents his first design for the retail sector.

With marble flooring and limed oak shelving, the look and feel of the new area was carefully done to create something “quite homely and accessible”, as well as a space that “talked of the history of Harrods; talked of an iconic British brand”, said Gerard, noting that wine and spirits was the second department ever created in the life of the store, following its origins as a tea house.

While the materials give an impression of opulence, the scale of the new shop, which covers around 8,000 sq ft, is accentuated by its layout over a long, low-ceilinged space, featuring a series of interconnected rooms, allowing one to look through the store from one end to the other, with features that lead the eye into the distance.

Putting aside the overall impact, it’s the detailing of the drinks shop that really impresses. Chilled, glass-fronted cabinets called ‘Hero Shelves’ contain the finest wines in the range, while all the lighting is screened in such as way to prevent the emission of damaging heat or ultraviolet rays.

Within these cabinets are constantly circulating flows of air to keep the wines at the perfect temperature and humidity, and there’s even a whole room of these transparent containers for magnums and even bigger bottle sizes.

“We have always had a really good range of large formats, but before, they weren’t displayed with authority,” said Gerard.

Bespoke cradles are also used to hold display bottles at an angle of 27 degrees, which, Gerard told db, is the optimum slant for visual effect that still allows the wine to remain in contact with the cork – which is of course necessary to keep the stopper wet.

Then there’s the overall temperature of the space, which is kept at a constant 18.5 degrees Celsius, in contrast to the old drinks shop, which was at 20 degrees C like the rest of the department store (although this former area did contain at ‘fine wine vault’ chilled to 17 degrees C).

Considering the new shop, like its predecessor, is housed in the lower ground floor of Harrods, why was the decision taken to move it to a different part of the same level?

Gerard explains. “With our old location we were effectively landlocked, whereas now there are 12 different ways of approaching the shop, so we are much more accessible, and there are five separate openings leading into the area.”

But the other main reason to move and create a completely new drinks shop within the department store is “to revolutionise the concept of fine wine retailing,” according to Gerard.

Continuing, he said, “Often the experience of buying fine wine is too high-brow and intimidating, so you don’t attract the aspiring amateurs…. We wanted to create an environment that would deliver the exclusive service of Harrods to everyone.”

Helping Harrods in this endeavour is the educational element within the new store.

Throughout the space are ‘aroma tables’ featuring trumpet-like devices that, with the squeeze of a rubber bulb, like an old-fasthioned perfume sprayer, delivers the trademark smells of key noble grape varieties, from Chardonnay to Syrah and Pinot Noir.

The shop also includes two private tasting areas, one devoted to delivering wine education in partnership with the WSET, and the other acting as a consulting area for clients looking for specialist advice.

There is also a spirits room where, unusually, the labels are arranged by style, and this leads into a special area devoted entirely to the retailing of Louis XIII Cognac by Rémy Martin.

Beyond this is one of the most notable new developments for London as a whole, and that is the creation of a walk-in humidor and ‘cigar sampling’ room.

While the former allows customers to store cigars in special lockers that can be rented for £3000 per year, the latter is the first space in the UK to use a special smoke-filtering system to ensure you don’t step out of this basement space smelling of tobacco.

Developed in Switzerland, the Airkel air-filtration system ensures the sampling area is subject to a constant flow of air that strips the room from any smoke, but also your clothes – effectively washing everything free from the aroma-giving particles.

Also, one can consume any drink bought in the wine and spirits to complement your cigar, and there’s no extra ‘corkage’ charge.

Furthermore, all wines bought in the shop can be drunk in any of Harrods restaurants for £30.

So, what about the wine range in the new space? Gerard told db that it runs to 1,400 different lines, augmented by a further 600 spirits. While the wine range isn’t significantly larger than it was in the old shop, he has made a lot of changes, and says there are as many as 400 new lines, and, in terms of price, the current range goes from £9 to £28,000 a bottle.

Particular focus has been spent on ensuring that the fine wines are exclusives and / or direct from the cellars of the top producers – with Gerard stressing that Harrods no longer relies on the secondary market.

“We are now direct to source, because we want to always offer perfect provenance… the prevalence of forgery and fakes out there is scary, and Harrods has to have the stamp of authenticity,” he remarked, adding, “But it’s not just about forgery, but getting the wines to the customers in the right condition.”

Speaking generally about the new space at the official opening this week, director of food and restaurants at Harrods, Alex Dower, said that the wine shop was part of something much bigger.

“There is a lot happening at Harrods, and we are going through our biggest development in the 180-year history of Harrods, which we are calling ‘the taste revolution’. And we are doing this because the food and wine business is at the heart of this business.”

In a discussion with db later on in the evening, Gerard said that the bakery section and roastery had already been re-launched at the department store as part of this investment in food and wine. Then, stating the significance of the new drinks shop, not just for Harrods, but within a global context, he said, “We are redefining the benchmark in wine and spirit retailing.” 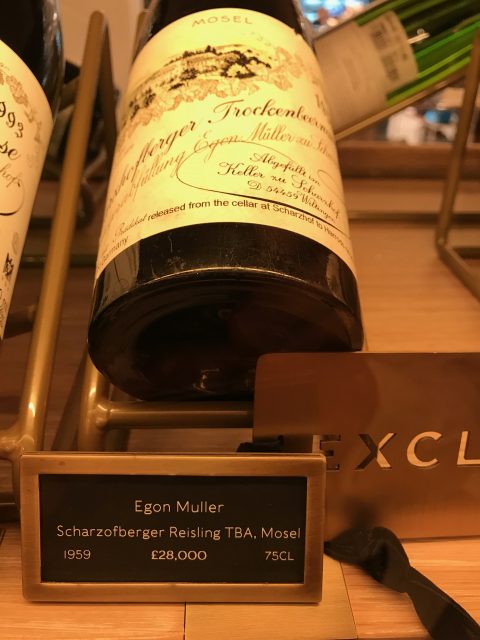 The most expensive single bottle of wine in the new Harrods drinks shop is a Riesling! Hailing directly from the cellars of Egon Muller – db’s 2015 Winemakers’ Winemaker – the wine is a Trockenbeerenauslese (TBA) from the producer’s famous Scharzofberger vineyard in Germany’s Mosel-Saar-Ruwer region.

Making it so pricy is, of course, its age and rarity. It comes from the 1959 vintage, which was the first ever release of a TBA from this vineyard, and one of just a handful of bottles left at the property. Harrods is the only retailer in the world where you can buy this bottle. 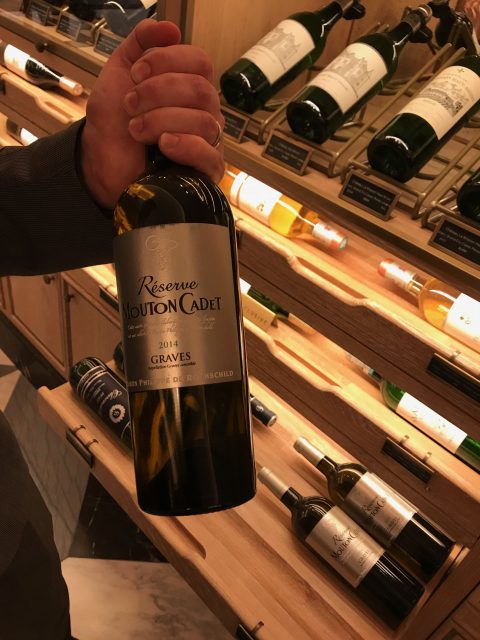 While there’s plenty of Mouton Rothschild on the shelves of Harrods’ new wine shop, it’s this bottle of Mouton Cadet that gets Gerard’s vote for one of the best finds in the store. Professing his love for white Bordeaux, he describes this wine as effectively a “dry Climens”, noting that the grapes for this Graves come from the biodynamic vineyards of Château Climens, a sweet wine producer in Barsac.

In the years that Climens doesn’t produce Sauternes, it sells its Semillon to Mouton, which crafts this dry white – a bargain at £14, according to Gerard. It may be on the bottom shelf, but just above it is Haut Brion Blanc, and then Pape Clement Blanc – the two greats of Graves, and, in the case of Haut Brion, the most expensive dry white wine in the world. (However, it’s the reds from this part of Bordeaux – La Mission and Haut Brion – that take the eye-level spots on specially-designed bottle cradles). 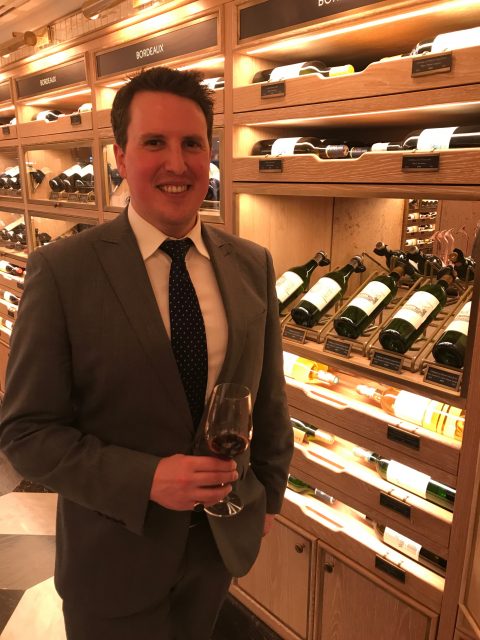 Finally, here’s Edward Gerard, whose official title is ‘buying manager wines, spirits and cigars at Harrods’. Gerard has worked for over five years at the store, and was elevated to the role as leader of the department almost one year ago. He started his career in wine in late 2002 at London specialist wine retailer Jeroboams, and has worked at Genesis and Quintessentially Wine since then.