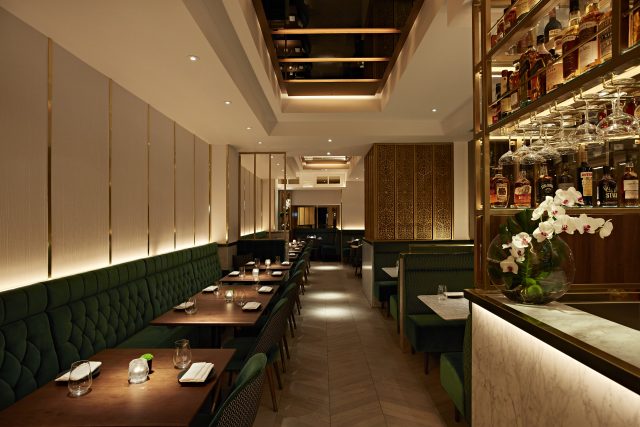 The concept: The über talented but refreshingly modest Manish Mehrota is responsible for whipping up some of the most exciting and inventive Indian cuisine being served anywhere in the world.

After a stint cooking beneath the New London Theatre on Drury Lane, in 2009 Mehrota upped sticks to New Dehli to open his first Indian Accent within the Manor Hotel.

Mehrota’s derring-do approach was visible from the get go. Using traditional Indian flavours and contemporary cooking techniques, he re-wrote the rulebook of our expectations of Indian cusisine.

The New Dehli original is now sitting in the number 30 spot of Asia’s 50 Best Restaurants list and its success has spawned sister sites in New York and London, the former opening in early 2016 and the latter late last year.

The décor: The London incarnation of Indian Accent occupies a long, elegant space on Albemarle Street in Mayfair, which is also home to another of the capital’s hottest Indian restaurants – Gymkhana.

Racing green velvet banquettes line the length of the room, which features a marble-topped bar up front, and an intricately patterned golden screen by the staircase. The silvery walls are lined with gold and wooden tables are pleasingly bereft of white cloths.

Visiting on a Tuesday evening, with Chet Baker’s velvety vocals drifting through the speakers, the low-lit space was cosy and convivial.

The food: To the uninitiated, the menu is something of a minefield, as almost every course features an unfamiliar ingredient, from Parmesan papad and duck khurchan to soy keema.

Keen to understand each dish, we asked our waiter to walk us through the food offering, which he diligently did with good humour, despite it feeling like we were putting him to the test.

The best way to experience Indian Accent at dinner is to opt for the four-course tasting menu.

Without wanting it to sound too much like a Manish Mehrota love-in, we didn’t have a dud dish throughout the evening. Dining with my incredibly patient driving instructor who moonlights as a jazz musician, after finally passing my test, our meal began with two amuse bouches: a piping-hot shot of pumpkin and coriander soup and a miniature blue cheese naan no bigger than a communion host.

Despite their diminutive size, both packed a flavour punch, the tangy blue cheese perfectly complementing the lightly spiced, creamy soup. We were off to a good start.

My starter, composted of two tiny towers of Kashmiri morels sitting in a creamy, walnut-flecked sauce alongside a disc of salty Parmesan, was deliciously earthy and spectacularly savoury.

The morels were so deep in flavour they almost tasted meaty, while a subtle but persistent hint of spice added to rather than took away from the dish.

My instructor’s perfectly spherical, Panko-crusted, beetroot and peanut butter croquettes with swirls of goat’s cheese purée were equally compelling, playfully twisting on a tried and tested flavour pairing with the audacious (and inspired) addition of peanut.

Signature dishes: One of the most interesting and impressive dishes on the menu is the soy keema – a veggie dish so meaty in nature it leaves you wondering how Mehrota does it.

Served in a round clay pot with a sunshine yellow egg yolk brightening the middle, it looks like a minced beef sauce that’s about to be flung onto a plate of spaghetti.

The confidently spiced dish, tempered by cooling cubes of kaffir lime-laced brioche, is so rich and complex in flavour, it’s hard to believe Mehrota has achieved this magic with veggies alone.

It’s worth ordering a couple of the naan-style kulcha breads – both the butter chicken and smoked bacon are dangerously delicious, the latter like a fatty, salty mini pizza oozing with cheese that leaves you wanting more.

The drinks: Wine is given great importance at Indian Accent and our animated Italian sommelier, Luca from Friuli, was charm personified. His pairings were often daring – the blue cheese naan was cleverly matched with a nutty medium-dry Madeira from Barbeito.

Meanwhile, my meaty morels were paired with a golden glass of 2004 Lopéz de Heredia Viña Tondonia Reserva, which delighted with its signature oxidised notes of toasted almonds and cooking apples.

Proving seafood doesn’t always demand white, my seared scallops, rava prawns and shrimp fried rice main came with a ruby red glass of 2015 Evolution Pinot Noir from the Willamette Valley, which was bursting with juicy red fruit and had an appealing savory thread running through it.

Who to know: If you’re lucky like we were, you might get to meet Manish Mehrota after service as he greets guests at their table.

Don’t leave without: Checking out the white peacock wallpaper in the lavish loos then ordering dessert. The treacle tart with vanilla bean ice cream is particularly lovely, its gooey innards sticky with intensely sweet treacle flavour.

Last word: With its elegant décor, sultry soundtrack, friendly service and faultless cooking, there’s little not to like about Indian Accent. Mehrota’s approach to Indian cuisine is imaginative and unconventional, offering a contemporary twist on ancient flavours looked at through a London lens.

I remember my first meal at Tamarind in Mayfair – the first Indian restaurant in Europe to win a Michelin star – vividly. My experience at Indian Accent gave me a similar thrill, further proving that, when in the right hands, Indian food can and should be taken seriously in the fine dining sphere.