Cellar of legendary entrepreneur to be auctioned

The wines from the cellar of late American billionaire philanthropist, entrepreneur and Blade Runner producer, Jerry Perenchio, are to be auctioned in Hong Kong and New York this spring.

Featuring what the auctioneer of both sales, Sotheby’s, describes as, one of the most superb collections of mature wines to ever appear at auction,” the collection includes a wide array of all the classic wines from Bordeaux and Burgundy, in various formats and including very mature vintages.

The first sale will take place in Hong Kong on the 30 March, with proceeds from the sale benefiting the Perenchio Foundation, an initiative to fund visual and performing arts programmes and institutions in his native Los Angeles.

His son, John Perenchio, said: “My father had a true passion for the best, including exceptional wines. He had a wonderful life with few regrets, but one he shared with me is that he would have enjoyed savouring the remaining contents of his cellar with family and friends. Though I offered to take over that ‘chore’ on his behalf, I am proud to announce that he chose instead to auction his wine and have all proceeds benefit the Perenchio Foundation, whose principal mission will be to support visual and performing arts programs and institutions in Los Angeles.”

Jamie Ritchie, worldwide head of Sotheby’s Wine, added: “The Jerry Perenchio Cellar is without doubt one of the greatest collections of mature wines ever to be offered for sale at auction.

It includes previously unthinkable quantities of legendary vintages from Domaine de la Romanée-Conti, Leroy and de Vogüé, as well as Petrus, Mouton Rothschild, Lafite, Latour, Margaux and Haut-Brion. While Mr. Perenchio was perhaps best-known as the former chairman and CEO of Univision and for championing some of the entertainment world’s greatest talents, he also applied his instincts for excellence and his unbridled passion to assembling his cellar.

“The result is a truly remarkable collection of the greatest mature wines that exist and one that epitomises the best of the best – something Mr. Perenchio’s strived to achieve in both his professional and personal life. It is now time for collectors and wine lovers all over the world to have the opportunity to enjoy these legendary wines, while perhaps raising a glass to the wisdom of the 20 ‘Rules of the Road’.”

With one of the first tenets of his ‘Rules of the Road’ being: “Stay clear of the press,” it is unsurprising that Perenchio’s name will not be known to many but he was, in fact, 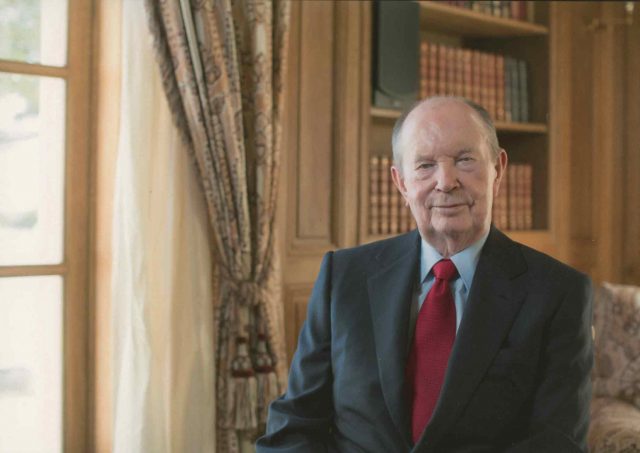 the man behind some of the seminal performing artists, sporting events and landmark cinema and television of the late 20th century.

Born in Fresno in 1930 and moving to Los Angeles when he was 15, Perenchio’s life was always geared towards the performing arts thanks to his father, Andy, who was the manager of the city’s Greek Theater.

In 1963, after a variety of small jobs, he helped form Chartwell Artists, a talent agency that, at various points, included such artists on its books as Marlon Brando, Jane Fonda, Robert Duvall, Johnny Mathis and Elton John.

In the early ‘70s he promoted not only Muhammad Ali and Joe Frazier’s ‘Fight of the Century’ but also Billie Jean King and Bobby Riggs’s ‘Battle of the Sexes’.

His work with Norman Lear and Bud Yorkin led to some of the US’s most popular television of the 70s and ‘80s: Allin the family, Sanford and Son, The Jeffersons and more while he was also an executive producer on 1982’s Blade Runner and Driving Miss Daisy.

In 1992, forseeing the rise of Spanish language television, he acquired Univision Communications for US$550 million and sold it in 2007 for US$13.5 billion.

His grandfather, Giovanni, as an immigrant from northern Italy in 1896, had become a successful businessman and winemaker and Jerry was likewise a keen collector and planted a small vineyard of his own at his Bel Air property – which is currently the most expensive property for sale in the US (US$350m).

He was also a keen collector of fine art, amassing a collection of impressionist and modern works by the likes of Monet, Cezanne, Picasso, Rodin, Degas and Matisse.