Scotch whisky brand Monkey Shoulder is shaking things up with its mobile mixer – a 2,400 gallon cocktail shaker in the guise of a cement mixer that it’s taking on the road in a series of pop-up appearances across America. 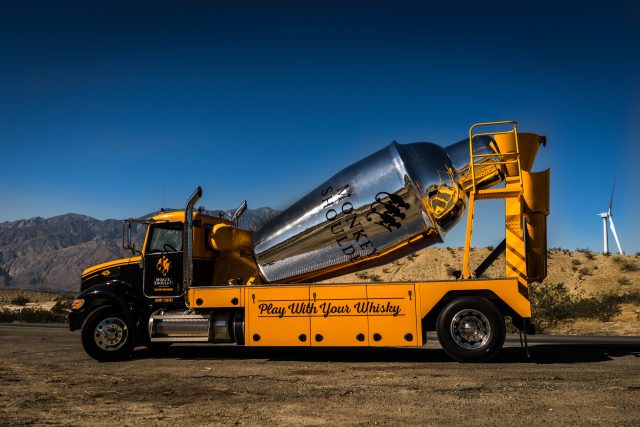 The mixer, dubbed The Monkey Mixer, will make its first stop at the Arizona Cocktail Week in Phoenix, due to be held from 17 to 19 February, before travelling to a number of other US cities. The mixer will hold 123,000 bottles of William Grant & Sons’ popular blended Scotch brand.

Monkey Shoulder’s US ambassador, Seb Derbomez, and brand associate, Tobias Schopf, will serve a cocktail called the Mixed Up Monkey straight from the machine’s chute.

“For this first event, we’ve chosen to offer the ‘Mixed Up Monkey’ cocktail, a mixture of Monkey Shoulder [1 ½ parts], mint syrup [3/4 parts], soda [1/2 part], and lemon juice [3 parts] chosen for its universality and its playfully fun use of the whisky,” said Derbomez.

The Monkey Mixer forms part of the company’s  plan to “challenge perceptions about Scotch whisky and redefine expectations for cocktails”.

“Many consider whisky sacred and precious. Many take their cocktails very seriously. We respect that, but believe people should play with their whisky, and enjoy the experience,” said Derbomez.

“Monkey Shoulder is an award-winning whisky that is made for mixing, and we are dedicated to sharing the joy and wonder of what a whisky cocktail experience can be with people across the country. The Monkey Mixer is a great vehicle to share this message in a big and unmistakable way”.