The drinks industry is quickly realising that the enjoyment of alcohol is in no way limited to the tongue.

The idea that all flavour resides in the tongue has been thoroughly debunked – 80% of what we perceive as taste is actually smell, according to Dr Alan Hirsch of the Taste Treatment and Research Foundation in Chicago.

The drinks industry is quickly adapting to the fact that our enjoyment of wine, beer and whisky goes far beyond sensations on the tongue. This week saw a $960,000 government grant for a laboratory using augmented reality to research the best sensory environments for consumers to buy and enjoy wine. Meanwhile, Coravin’s new app Coravin Moments will pair wine not just with food, but music, films and literature.

We are gaining an increasing appreciation of how drinking is a multi-sensory experience, affected not just by taste but sight, sound, smell, touch and our cultural expectations. Here are five experiments and inventions that challenge the traditional notion of taste residing solely on the tongue.

Before you break out your favourite Ardbeg or Beaujolais, it’s worth getting the lighting just right. Charles Spence, a professor of experimental psychology at Oxford, has conducted research into how colour can affect our enjoyment of wine and whisky.

The results of the wine tasting experiment in 2014 at the Campo Viejo Colour Lab are much as you would expect, showing the strength of our associations with different colours. Red lighting brings out the fruitier notes of wine, while green lighting highlights a wine’s freshness.

When it came to whisky, Spence created three different sensory rooms to highlight different aspects of the drink in 2013. In the ‘Nose’ room green lighting, real grass, deckchairs and the sound of a lawnmower made the whisky significantly grassier on the nose. The ‘Taste’ room – completely red with lots of rounded edges and tinkling music– made the whisky taste much sweeter.

Finally, the ‘Finish’ room – with creaking floorboards, trees, assorted clocks and piles of books – gave the whisky a significantly woodier aftertaste. The participants liked the whisky significantly more in this room, proving that clichés about people sipping whisky in deep armchairs in front of a crackling fire are true.

The research highlighted how lighting and décor in restaurants and even our own homes can improve the drinking experience. How your guests will react to a dinner party bathed in blood red light, however, could an issue. 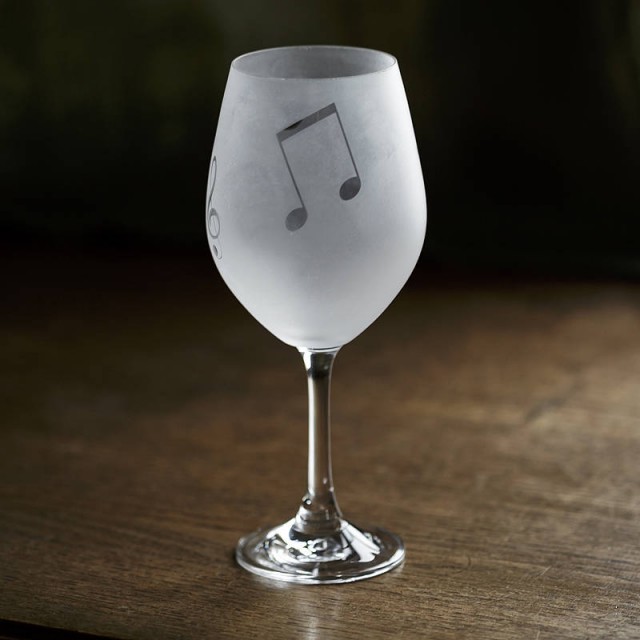 Background music can often make or break an evening at a restaurant and it can also significantly alter the taste of wine. That’s what Adrian North found back in 2011 when he experimented with how different styles of music accentuate different characteristics of wine.

North gave 25 students a glass of wine and told them to drink it while listening to four different kinds of music and then asked them to rate four different characteristics of the wine out of 10.

He found that playing Carmina Burana by Carl Orff (which contains the supremely melodramatic ‘O Fortuna’) made the Cabernet 60% more “powerful and heavy” compared with no music. Meanwhile, playing Nouvelle Vague’s zippy cover of Just Can’t Get Enough made a glass of Chardonnay 43% more “zingy and refreshing” than without music.

Restaurants and bars have been quick to pick up on the link between sound and taste. Heston Blumenthal served seafood with an iPod playing the sound of crashing waves at The Fat Duck back in 2007, while in 2014 wine writer and sonic artist Jo Burzynska opened the world’s first sonic wine bar.

Back in 2016 we ran the terrifying headline ‘Could furry wine glasses be the future?’, in response to Heston Blumenthal, mixologist Tony Congliaro and Charles Spence experimenting with the way textures and touch impact taste.

Mercifully, two years on we continue to drink our favourite vintages from glass, but could we be missing out on the taste experiences to be had from fluffier vessels?

In The Fat Duck, Blumenthal served a pudding containing orange blossom and meringue with a fluffy spoon to complement the dish’s flavours. Spence, meanwhile, investigated how fabric swatches and sandpaper impacted the enjoyment of wine.

He told us in 2016 that he hoped he “might affect the language used to describe wine so whether we see textual terms, like velvety, and if we can enhance them”.

At Conigliaro’s Dalston bar Untitled, which opened last year, the clientele could enjoy the Ninfeo served in a 3D-printed vagina (sadly it’s no longer on the menu) or a Violin (flavoured with dark oak, beeswax and vodka infusions) in a glass shaped like the instrument.

Is this a gimmick or does touch really affect taste? Research from the University of Chicago has shown that mineral water tasted noticeably worse from a flimsy rather than a firm cup. Anyone’s whose tried to drink Champagne out of a plastic cup will know it’s a bad idea (although that’s because of the bubbles sticking to the walls of the glass).

So maybe don’t start breaking out the fluffy glasses quite yet, but the effect of touch on taste certainly shouldn’t be dismissed.

Last year, Charles Spence, the Portuguese Cork Association (APCOR) and ‘sensory architects’ Bompas & Parr collaborated on the lavish Grand Cork Experiment in Soho. Their aim was to discover if the sound of a cork popping contributed to drinkers’ enjoyment of wine.

The 300 participants were played the sound of a cork popping or a cap being unscrewed before tasting identical wines, and were then asked to taste the same wine bottled under cork or screw cap. They were asked to rate the wine on quality, intensity and if the wine invoked a feeling of celebration.

The experiment found that wine under cork was perceived to be 15% better quality than wine in screw top bottles. Spence said: “The sound and sight of a cork being popped sets our expectations before the wine has even touched our lips, and these expectations then anchor our subsequent tasting experience.” 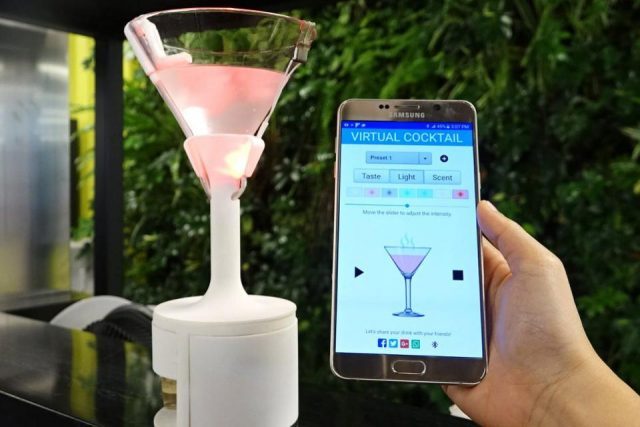 In a story that could be taken straight from science fiction, last October saw the birth of the ‘Vocktail’. It’s a futuristic Martini glass that uses an app to transform water into a drink of your choice using electric pulses, scent cartridges and LED lights.

The device was created by Nimesha Ranasinghe and a team from the National University of Singapore. Ranasinghe has previously created ‘digital lemonade’ using LED light and electrodes, and the addition of scent cartridges opens up much wider flavour possibilities. The app also lets you share ‘virtual cocktail’ recipes with the wider community.

Though still in its early stages, the device could theoretically render the drinks industry obsolete if it continues to develop. The thought that complex flavours can be reduced to electrical pulses, smell and colour is a little depressing, but we doubt drinkers will be abandoning the real stuff any time soon.