Could virtual cocktails be the next big thing?

Scientists at the National University of Singapore have developed a virtual cocktail, or ‘vocktail’, that digitally simulates multisensory flavour experiences. 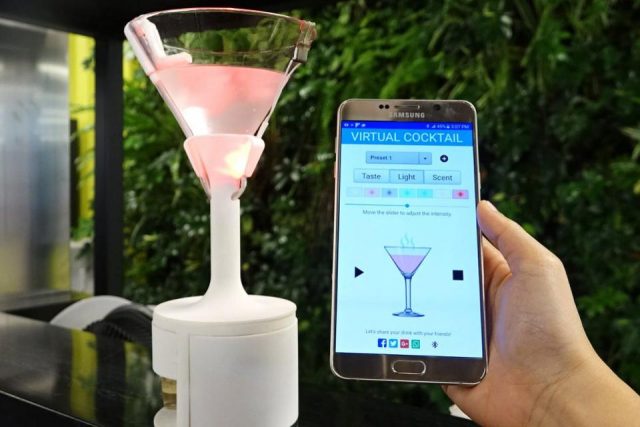 As reported by Forbes, the interactive cocktail glass allows the user to create their own virtual flavours, smells and colours to enhance the existing ones in the drink.

The inside of the base of the glass contains the electronics needed for multisensory stimulation, including scent cartridges and three micro air pumps.

According to its creators, the scents housed in ‘smell chambers’ in the base of the glass take just one second to rise up through the glass and reach the drinker.

Meanwhile, LED lights can chance the colour of your cocktail, and two silver electrodes on the rim of the glass give off salty, bitter and sweet tastes when the drinker touches them with their tongue.

Leader of the study, Nimesha Ranasinghe, found that the combined stimulation of sight, smell and taste from the glass changed the perceived taste of the drink, enhancing its flavour and creating a richer drinking experience for the user.

The vocktail comes with an app that allows users to customise their drinking experience by choosing the colour of their cocktail and its virtual aromas and flavours via Bluetooth technology.

If a specific combination works really well, users can save the information of their virtual cocktail and share it with their friends via the app.

This isn’t the first time technology has been used to enhance the cocktail drinking experience.

Earlier this year Michelin-starred restaurant City Social in London launched an augmented reality cocktail menu called Mirage, which takes imbibers on a journey of art through the ages via.

Users are asked to download an app before they arrive then choose their favourite art-inspired cocktail. When they focus their phone at the cocktail, technology within the coaster brings the artwork to life via images and animations.

The app allows sippers to save, email and share their photos on social media.