Oxford University has unveiled the first spirit from a partnership with the newly established distillery, The Oxford Artisan Distillery (TOAD) – a gin made with ingredients grown in the university’s 17th century botanic garden. 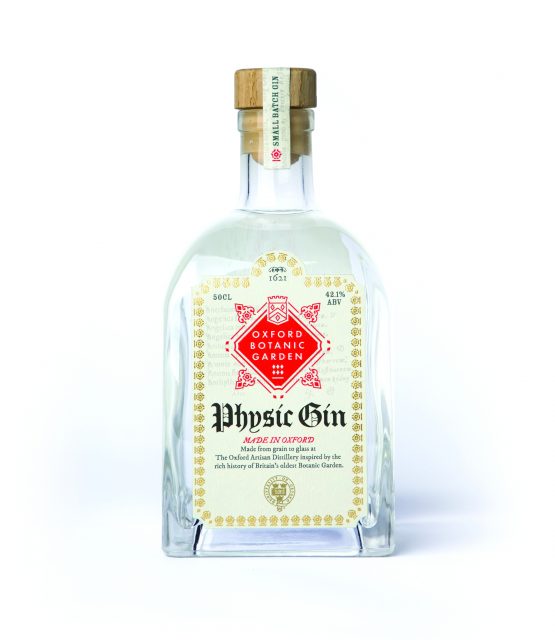 Physic Gin, made under the University of Oxford brand, is the first spirit to be launched under a 25-year licence that allows the distillery to produce alcoholic spirits for the world-famous university.

Botanical used to make the gin have been foraged from the University of Oxford’s Botanic Garden, which was founded in 1621 as a physicke (physic) garden for the teaching of herbal medicine.

It was planted in the 1640s by its first keeper – Jacob Bobart the Elder, who kept a meticulous record of all the plants that he grew – and is the oldest of its kind in the country.

Around 25 botanicals, mostly from Bobart’s list and many grown and foraged in the Garden today, have been used to produce Physic Gin.

“I was so impressed by the integrity and passion behind TOAD; it makes perfect sense for Oxford Botanic Garden to align itself with Oxford’s first distillery,” said director of Oxford Botanic Garden Professor Simon Hiscock. “I’m looking forward to making spirits inspired by our historical collections and having some botanical fun along the way.”

The grain used to make the gin is grown sustainably in fields close to Oxford and distilled in hand-crafted copper stills, which includes a 2,200-litre still named Nautilus, and its 500-litre partner, Nemo, while the liquid is hand bottled on site.

“This gin is medicinal – in a good way,” said master distiller Cory Mason. “Botanicals like wormwood, rue and sweet woodruff bring a deeply complex flavour to bear and take us back to the time when plants formed the base of all medicine. Expect rich, earthy notes from this gin – like nothing you have tasted before.”

TOAD officially opened for business in July 2017 in a purpose-built site, following five years of planning, and is set to produce a range of spirits, including gin, absinthe, vodka and whiskey.

Its first, Physic Gin, is available in 50cl bottles priced at £34.95 from spiritoftoad.com