While it’s easy to find a delicious cheap eat in London – we’re big fans of Brasserie Zédel’s £9.95 two-course prix fixe menu – the capital is also home to some of the most expensive dishes in the world. 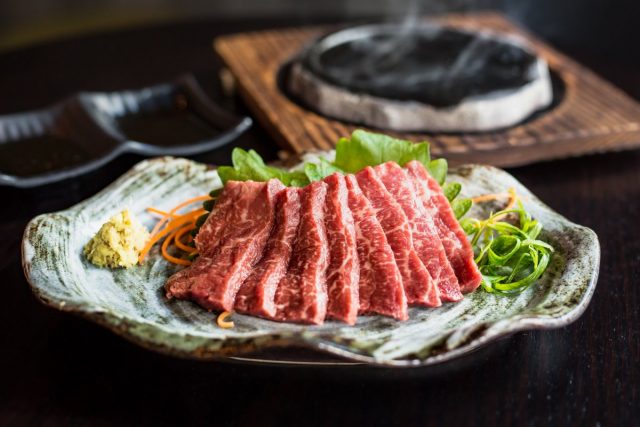 A number of these creations were pure publicity stunts to win column inches – from the £200 white truffle pizza at The Wellesley in Knightsbridge to the £1,100 ‘Glamburger’ at American diner Honky Tonk in Chelsea.

Others, like the wagyu ribeye at Wolfgag Puck’s steakhouse Cut at 45 Park Lane, are permanent fixtures that have stood the test of time.

Read on for our round-up of the 10 most expensive single dishes on sale in London. If we’ve missed any off then let us know in the comment box.

And if you’re thinking of ordering any of them, try and do it on a day when you’ve been given guardianship of the company credit card. 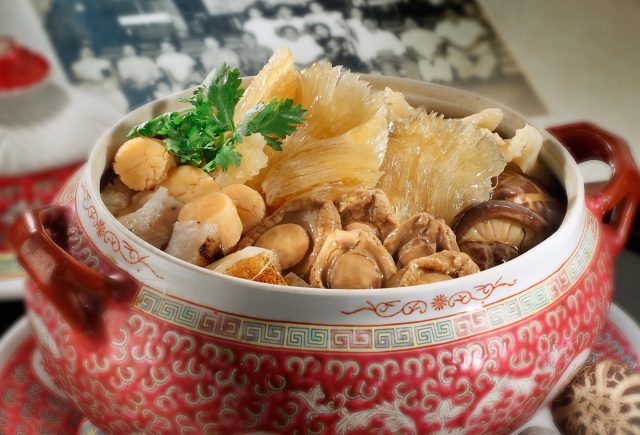 Also known as Buddha’s Temptation, this shark fin soup was originally created in Fujian Province during the Qing dynasty and is considered a Chinese delicacy revered for its rich taste and high-end ingredients.

Made from a blend of shark fin, quails eggs, scallops, sea cucumber, abalone, chicken, ham, pork, mushrooms and ginseng, the soup, which takes two days to prepare, gets its name from allegedly being so tasty that it would entice vegetarian monks to flee from their temples to enjoy the fishy, meaty concoction.

The soup is controversial due to its inclusion of shark fin and abalone. Fine dining French restaurant Kai in Mayfair got its version of the soup into the record books when it listed the delicacy for £108 a bowl on its menu in 2005. The dish, which had to be ordered five days in advance, has since been taken off the menu due to controversy surrounding shark’s fin. 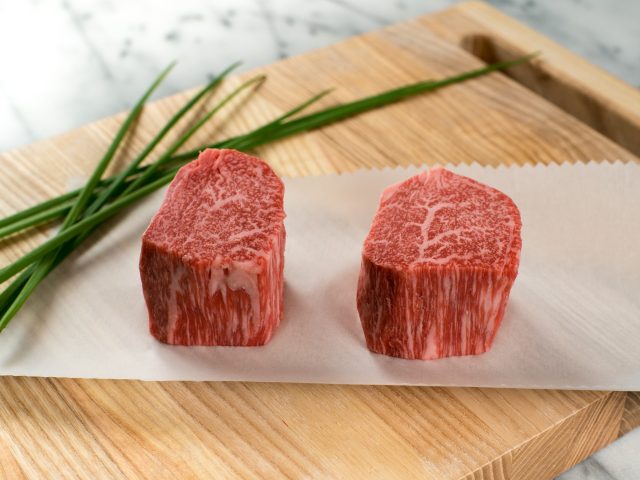 Kobe beef is the Krug of the meat world. It hails from the Tajima strain of Japanese Black cattle that are fed on grain and roam in the country’s Hyogo prefecture. The beauty of the beef comes from its high level of marbling, which results in a silky, melt-in-the-mouth texture.

Kobe beef is a registered trademark in Japan and in order to qualify, breeders have to follow a strict set of rules. It was first exported outside of Japan as recently as 2012. To celebrate its arrival in the UK, restaurateur Martin Williams was the first in Europe to list Kobe on his menu. He sells the grade 10+ steaks at £1 per gram, the most expensive coming in at £149. 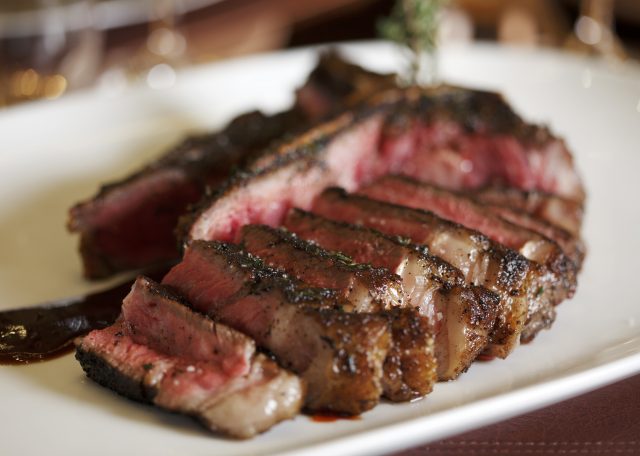 Another meat mecca shining a light on beguiling beef is Wolfgang Puck’s Cut at 45 Park Lane where you’ll find Australian wagyu served sashimi style and weaved into a salad alongside spicy radishes and Greek cress.

The most expensive cut on Puck’s menu is his £150 8oz Japanese wagyu rib eye hailing from the country’s Kyushu prefecture. These cows live the life of Riley, enjoying saké massages and lashings of beer – no wonder they taste so good.

Like kobe beef, wagyu has a high marble content and a melt-in-the-mouth texture. The fat in the meat melts away when cooked, adding its richness.

“Eating a kobe or a wagyu steak is an experience. It’s similar to caviar and truffles – you don’t gorge on it, you just eat a small amount,” Puck says, describing the silky texture of Kobe as similar to foie gras and the pleasure derived from eating it equal to sex.

Perhaps that’s how he asks his staff to sell it, as 20% of the steaks sold at Cut are kobe despite their eye-watering price tags. 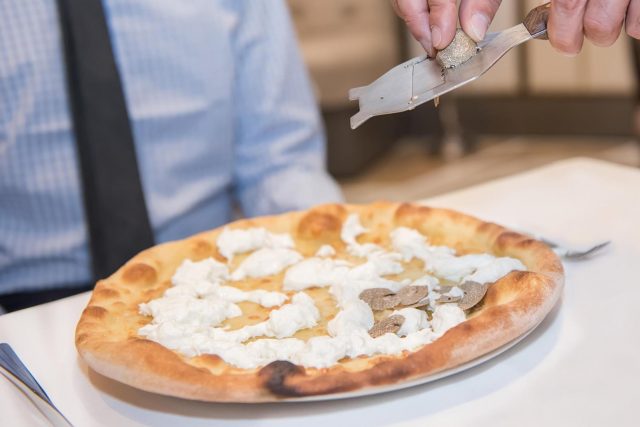 In late 2016, fine dining restaurant The Wellesley in London’s Knightsbridge put a £200 pizza on its menu loaded with a blanket of white truffles. The ‘white gold’ hailed from Alba in northern Italy, the most prestigious part of the planet for white truffles.

Bucking tradition, the sourdough pizza shunned tomato in favour of a creamy burrata base, while the truffles, which were flown in from Alba twice a week, were kept in airtight bags of dry rice to ensure they didn’t dry out.

Rather than just a gimmick, the pizzas sold pretty well, especially at weekends when a dozen on average were munched. The pizza formed part of a decadent white truffle-themed menu that also featured a £70 white truffle and Parmesan risotto.

Back in 2005 Gordon Ramsay pulled a similar stunt at Maze in Mayfair when he put a £100 white truffle pizza on his menu, created by his protégé at the time, Jason Atherton. Those who ordered the pizzas were treated to a guest appearance from Atherton, who shaved the white truffle tableside. 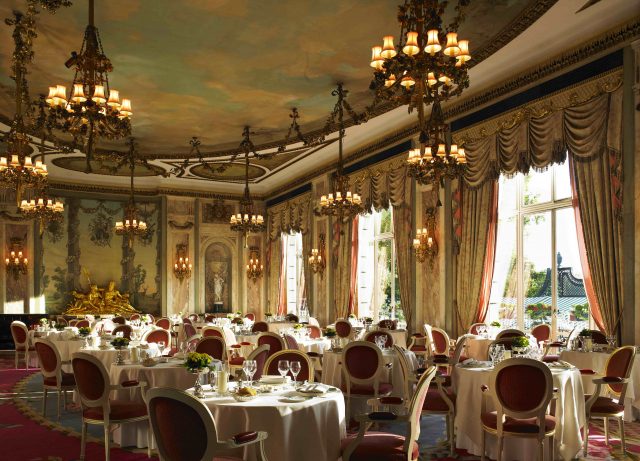 If you’re eating breakfast at The Ritz then you’re already doing pretty sweetly in life, but if you want to feel that little bit more pampered, then why not order its signature caviar omelette, priced at £300 a pop?

Part of the historic hotel’s ‘prestige’ breakfast, the omelette (or scrambled eggs if you’d prefer) is loaded with 50g of Oscietra caviar. If you’re feeling a little less flush you can opt for the Perigord truffle scrambled eggs for a mere £85.

One of the most prized types of caviar eclipsed only by Beluga, Oscietra comes from a sturgeon of the same name that can live for up to 50 years. Running the colour gamut from deep brown to light gold, the paler roe is more sought after as it’s richer in flavour and come from older sturgeon. 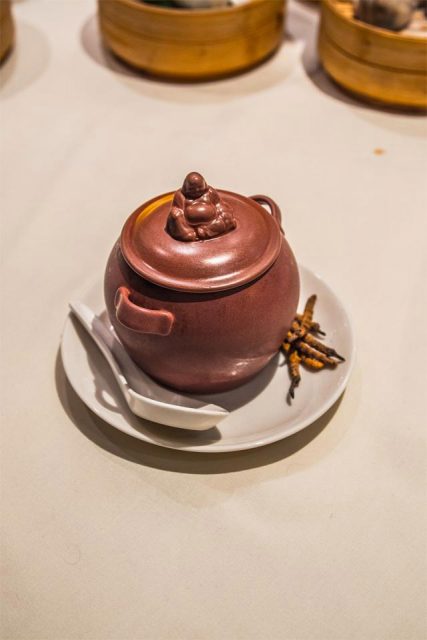 Don’t be too alarmed – the soup isn’t actually made from caterpillars. It takes its name from a rare herb used to make the delicacy, which looks similar to the voracious insect. Said herb is only found growing at high altitudes and is simmered down for eight hours to make the pricey broth.

The Royal China Club is home to some of London’s most expensive dishes. A serving of abalone (made from dried sea snails) will set you back £350, while a pot of tea made with leaves plucked from the same bushes in Fujian province that created a tea that cured the mother of a Ming dynasty emperor of her illness.

The leaves are wiped in goat’s milk to make them shiny, and are then baked in small batches over charcoal and left to mature for up to 80 years. While pushing rare ingredients – shark’s teeth are used in one sauce – the restaurant stopped selling shark fin soup in 2011. 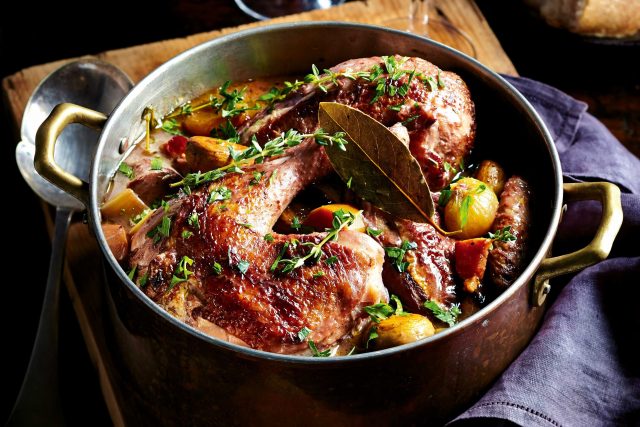 Another publicity stunt dish hit the headlines in 2013, when rooftop restaurant Coq d’Argent in the City launched a ruinously expensive coq au vin dish priced at £1,000.

Made by the head chef at the time, Mickael Weiss, the pricey bird, big enough to feed four financial fat cats, was marinated for a day in Domaine Trapet Le Chambertin Grand Cru 2009 until “tender and soft with rich and fruity undertones from the wine” – you’d hope it would be soft after a day-long bath in Grand Cru Burgundy.

To “enhance the flavours” of the Bresse chicken, the dish came with an additional bottle of Trapet Le Chambertin 2009. Anyone mad (or rich) enough to order the dish was allowed to pick the charity that all proceeds from it went to. 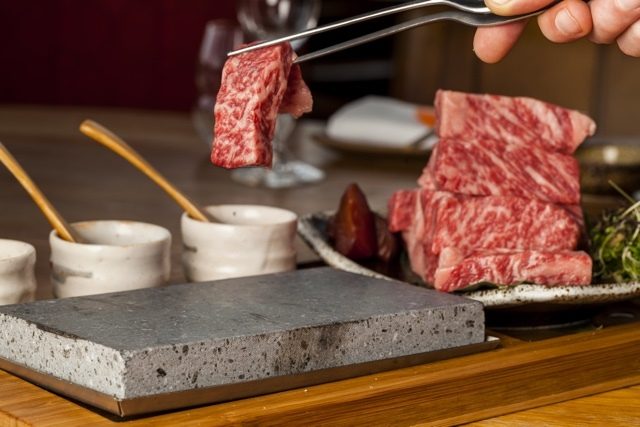 Despite its £1,000 price tag, this showstopper is a permanent fixture on the menu at Brazilian / Peruvian / Japanese fusion restaurant Sushisamba in the Heron Tower.

With its killer cocktails, breathtaking views and pumping soundtrack, a night at the restaurant already feels like an incredible treat, but those wishing to push the boat out further can do so with an eye-wateringly expensive portion of kobe, which you cook yourself on a small square hot stone using chef’s tweezers.

The beauty of the DIY approach is that you can cook the melt-in-the-mouth marbled meat to your liking. And at that price it would be sacrilege to cremate it. The beef needs the briefest of introductions to the hot stone to warm it up a bit but still retain its foie gras-like silkiness.

Those keen to taste kobe but less hot on the idea of splashing out £1,000 for the privilege can order the kobe temaki hand roll for a mere £26. 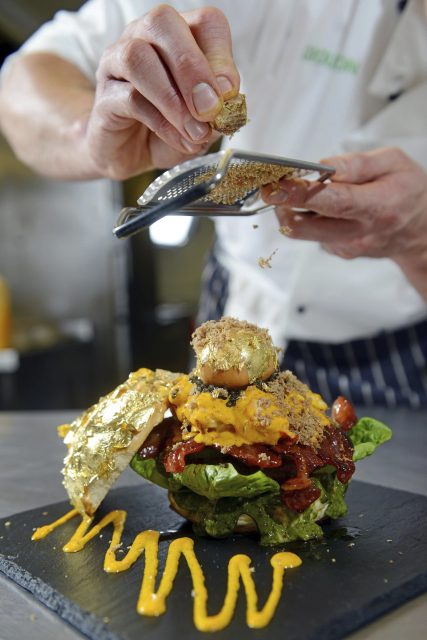 One of the crassest food-related publicity stunts came in 2014 when American diner Honky Tonk in Chelsea, best known for its Bourbon and burgers, launched the ‘Glamburger’ boasting a £1,100 price tag.

Created by head chef at the time Chris Large (great surname for a chef), other luxurious ingredients include Iranian saffron, Beluga caviar and a hickory-smoked duck egg drenched in gold leaf.

Large described his 2,618 calorie creation as a ‘masterpiece’. We’re not sure how it tasted, but given the amount of press coverage it garnered, the Glamburger certainly proved to be marketing gold. 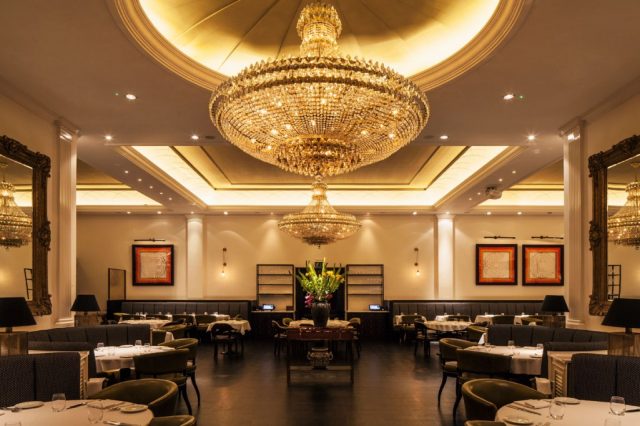 And finally… topping our list is a curry created by Bombay Brasserie in Kensington that costs the same as a family holiday to the tropics.

The decadent ensemble was created by Bombay Brasserie’s head chef at the time, Prahlad Hedge, who described it as “a real experience”. The basis of the recipe was inspired by a curry his mum used to make. Finished with a generous shaving of white truffle, the dish was created to mark the launch of Slumdog Millionaire on DVD.