db’s Phoebe French heads to The Coral Room at the Bloomsbury Hotel for a lightly smoked Tequila and mezcal-laced sip, perfectly seared tuna and pickled radish, and one of the longest English wine lists around. 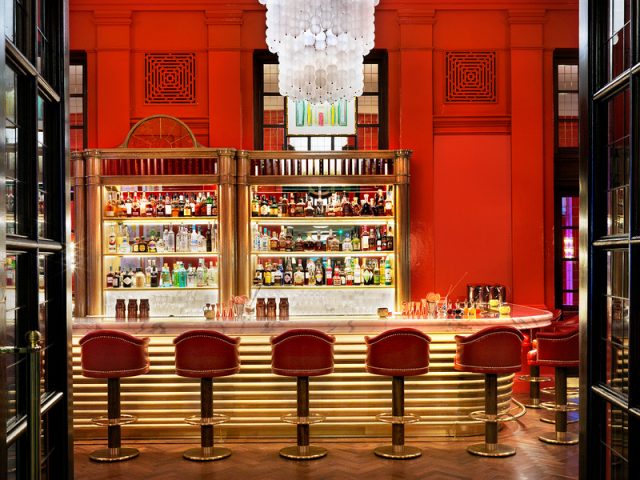 The concept: The Bloomsbury Hotel’s new grand salon bar has set itself the task of championing all things British. Occupying the front room of the Grade II listed hotel, the ‘country-meets-city’ drinks menu cleverly compliments the work of the building’s highly acclaimed architect, Sir Edward Lutyens, who is known for both his Arts and Crafts country mansions and city façades, including the British Medical Association in Tavistock Square and 67-68 Pall Mall.

British vodka and gin serves are complimented by those containing Tequila, mezcal, Bourbon, Sherry and rum, reflecting the melting pot of cultures that naturally congregate in cities. It is the English wine selection, however, that is the real star of the show. With a generous selection by the glass, the list will surprise even the most seasoned English sparkling wine drinker.

With provenance at the heart of proceedings, the bar’s Bloomsbury connection is not lost: The Ridgeview ‘Bloomsbury’ Brut is the house sparkling while the ‘Square Life’ cocktail, made up of four ingredients – Lustau Sherry, Campari, Orgeat and grapefruit juice – relates to the famous four Georgian squares once occupied by the Bloomsbury Set.

The décor: Although it is hard to imagine now, The Coral Room started out as the white-washed hotel lobby, with black leather furniture and floral sofas. No prizes for guessing the colour scheme now, though with the brass bar lights emitting a warm vermillion glow, the walls do appear more burnt orange than coral.

Martin Brudnizki, the man behind the interiors of Sexy Fish, The Ivy, J Sheekey, Aquavit and the Scarfes bar at the Rosewood, has once again worked his magic here. The double-height room is dressed with five bespoke Murano glass chandeliers, brass-studded coral leather bar stools and a polished marble bar counter. Glitz and glamour with a sympathetic nod to the 1920s and the area’s famed eponymous residents, The Bloomsbury Group.

The drinks: The menu is divided into 16 original sips followed by four interpretations of the classics. Opt for either a country or a city-inspired serve, with names such as ‘Wiltshire Warrior’, ‘Gin Lane’ and ‘Barbour and Barrel’ and prices ranging from £12 to £16.

A thirty bottle-strong list of English sparkling wine is not something you see very often – it’s certainly the longest list I have come across. Fizz from Buckinghamshire, Cornwall, Devon, Dorset, East Sussex, Gloucestershire, Hampshire, Kent, Oxfordshire, Somerset, Surrey, West Sussex and Worcestershire are showcased on the menu, and while a knowledgable bartender is always on hands, the list has helpful hints and notes accompanying each bottle. The by-the-glass selection is constantly changing and next month will focus on English rosé.

Signature sips: Gin-thusiasts with a fondness for both the spirit and its history can’t go far wrong with ‘Gin Lane’ – a blend of Hendrick’s gin, Viognier, St Germain, rose syrup and agave. A floral and aromatic sip, it is named after William Hogarth’s iconic print Gin Lane (1751), produced at the end of the so-called London Gin Craze, which features the steeple of St George’s Bloomsbury in the background.

The house sparkling offers (Ridgeview Bloomsbury Brut) is a great place to start for those unfamiliar with the delights of English sparkling. Stray further afield, Harrow & Hope Brut Reserve NV was a winner, bursting with fresh apricot, baked bread and toasted almonds. If you’re after a real treat, Hoffmann and Rathbone’s exquisite rosé is sure to deliver. The 2011 rosé reserve –  85% Pinot Noir and 15% barrel fermented Chardonnay – has been aged for 40 months on its lees and balances notes of fresh strawberries and peach with attractive, more savoury nuances.

The food: An enticing selection of bars snacks and small plates are available from 11am to 10:30pm, the Dorset crab with watercress and apple pairing particularly well with a glass of Albourne Estate Blanc de Blancs 2013.

For those wanting something a little more hearty, the menu also includes British classics Welsh Rarebit and a Cumberland sausage roll. The seared tuna, and in particular the wasabi, marries well with some of the more smokier serves on the cocktail menu.

Who to know: We were told The Coral Room has a ‘no empty glass on the bar’ policy, so regardless of your bartender, your glass will always be kept topped up. It is worth seeking out experienced general manager Giovanni Spezziga, formerly of the Rosewood’s Scarfes Bar, who has also headed up bar operations at Atul Kochhar’s Benares restaurant.

Last word: While I very much enjoyed the cocktails, The Coral Room’s selection of English wine is the real reason I’ll be making a return trip. There are plans to stock still English wines and the marketing manager tells me that they’re also exploring the option of using English vermouth for some low-ABV serves which he describes as “an emerging market”.

The number of wines by the glass is rare and offers those new to the category the chance to wade in without breaking the bank. This isn’t to say the drinks aren’t expensive, but given the location, they are perhaps more affordable that would be expected. The Coral Room is one to watch, particularly for fans of ESW.