A growing trend for healthy living and teetotalism, particularly among young adults, is continuing to drive sales of low alcohol wine, according to BMI Research, with a number of retailers working to bolster their ranges.

Particularly, young adults are more likely to be teetotal than their older counterparts, with more than a quarter of 16 -24 year olds not drinking compared to a fifth of the broader population.

This, combined with a growing trend for “healthification” and teetotalism in the UK, is pushing down alcohol sales in the UK, says BMI Research, and creating demand for new categories of alcoholic drinks, including low and no alcoholic beverages.

Tesco most recently launched a a new low-alcohol wine range to keep up with the public’s taste for lighter drinks, with the retailer claiming that its low alcohol range of could compete with their standard range “without any compromise on taste.”

The range will include five bottles — including still and sparkling versions of Sauvignon Blanc and Garnacha-rosé, and a Cabernet Tempranillo — and are made using a spinning cone technique that gently removes the alcohol without sacrificing the aroma, quality and flavour profile of the wine.

The wines, which have an abv of less than 0.5%, have been developed in partnership with Spanish wine producer Felix Solis and will be available in over 700 stores across the country and online and will be priced from £3. 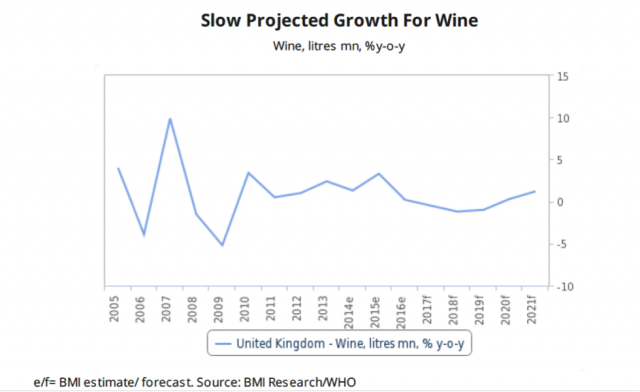 Likewise, in December 2016 , Lidl unveiled its low-alcohol wine range with its New Year Wine Cellar selection, of which five of the 14 wines released have an alcohol content of less than 12%.

Aldi launched its Featherweight collection, with four new wines with alcohol content of 5.5%, in August 2017, while Marks & Spencer is also scheduled to launch a number of low-alcohol wines in January 2018.

of the risks associated with heavy alcohol consumption,” the report read. “Low-alcohol drinks also have lower calories than conventional alcoholic drinks, further boosting its demand. The demand for low-alcohol content in drinks is g rowing not only in the wine segment but also for beer, with producers like Heineken, AB InBev and Carlsberg launching their own non-alcoholic beer offerings.”

In the spirits category demand for non-alcoholic options is also growing. Seedlip Drinks, the Diageo-backed non-alcoholic distilled spirit, launched in the US earlier this year after a successful first year in the UK, targeting health-conscious millennials.

At the time of its launch it was the “world’s first” distilled non-alcoholic spirits brand. Having quadrupled its production in its first month on the market, the company attracted investment from Distill Ventures – a company that is backed by Diageo and helps fund innovation within the spirits world. It was the first time that Distell had ever chosen to invest in a non-alcoholic product.