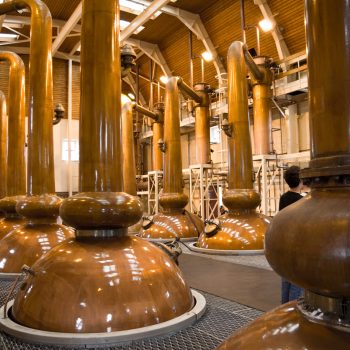 “The rapid growth of distilleries, an increase of 135% since 2010, is yet another positive sign of the UK spirits industry going from strength to strength,” said Miles Beale, chief executive of the Wine and Spirit Trade Association.

“From traditional products like Scotch, to the Great British Gin boom and newer products like English and Welsh Whiskey, it is an exciting time for spirits producers across the UK.

“Consumers here at home and around the world have developed a real thirst for top quality British spirits, and a new distillery is coming online at the equivalent rate of one per week to rise to that challenge.

Beale used the industry’s positive momentum to call for greater attention to the spirits industry by the government as it forges ahead with its plans for Brexit, highlighting the importance of swift and decisive trade deals to maintain its success.

“As the Government negotiates free-trade deals with both Europe and third countries there is a real opportunity for the UK to boost its exporting capacity by trading quality spirits overseas,” he added. “We have already seen how successful and in-demand British gin is to 139 countries around the world. But we believe with the right support the industry can go further to access more markets overseas.”

The trade body’s release followed statistics released by UHY Hacker – the national accountancy group – that placed the number of distilleries in the UK slightly higher, representing an increase of 19%, which corroborated an overriding upward trend, but differed slightly to statistics provided by the WSTA, which uses data from the HMRC, as to open a distillery you are required to obtain a licence from HMRC. Overall, UHY Hacker stated that the number of distilleries in the UK had increased by 107% since 2012, due to the rise in popularity of artisan gin.

“The gin-naissance shows no signs of abating, with the industry going from strength to strength,” said James Simmonds, partner at UHY Hacker Young. “Five years ago, artisan gin was a relatively unknown product, but now it’s very common to see five or ten different premium gins on the menu or on a supermarket shelf.”