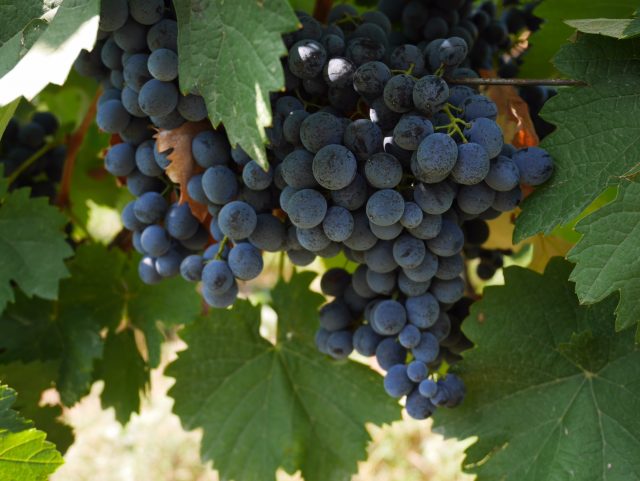 Saperavi, a thick-skinned and deeply-coloured grape variety, is the quintessential quality variety in Georgia, grown throughout Kakhati region. The grape is harvested in mid September till October, and is considered more frost-resistant than some Western European varieties. Unlike many red varieties, even the juice from Saperavi is purple-tinged, giving Saperavi wines an intensely pigmented colour. The grape produces dry wines as well as semi-sweet and dessert wines. 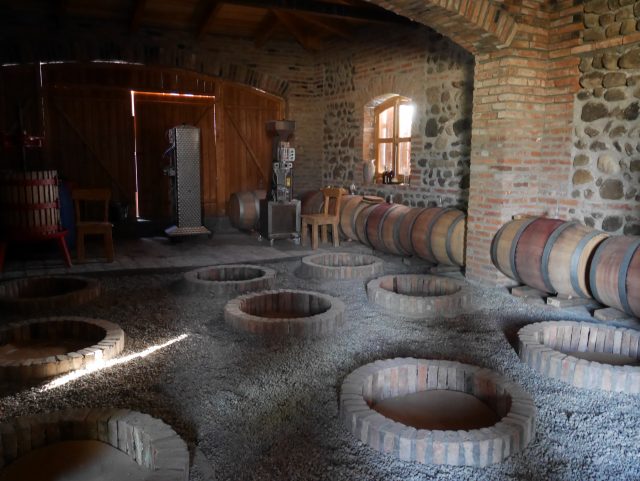 Qvevri, the traditional clay vessel used in Georgian winemaking, is seen here buried underground at Tchotiashvili Wines winery in Kakheti, Goergia’s biggest wine producing region in the east of the country. Located in the inner Kakheti area along the gorge of the Alazani river, the winery makes a range of natural wines using traditional Georgian grapes including white varieties Rkatsteli, Kisi, Mtsvane, Khikhvi as well as red wine made from Saperavi. As seen in the photo, gravels are spread around the qvevris to help cool down fermentation in the qvevri with water. 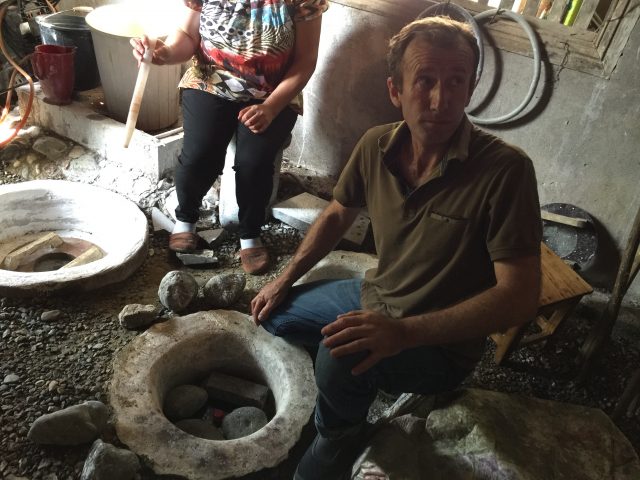 At Archil Guiniava winery, winemaker Archil is opening up a sealed qvevri to serve some freshly made wine, a blend of 50% Otskhanuri Sapere and 50% Tsolikouri. Otskhanuri Sapere is the predominant red grape variety in Imereti region, west of Kakheti. 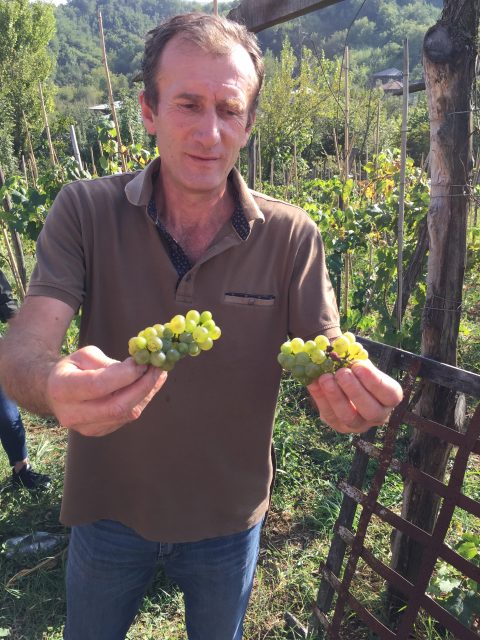 Archil is showing the Krakhuna grape variety grown in his vineyards in Imereti region. One of the oldest grape varieties in Georgia, the white variety is predominately grown in Imereti in western Georgia. The grape is thick-skinned, resistant to frost – a common climate hazard in western Georgia – and is described as “crunchy” by the winemaker. The grape is often blended with other Imeretian varieties including Tsitska and Tsolikouri to make white wines. 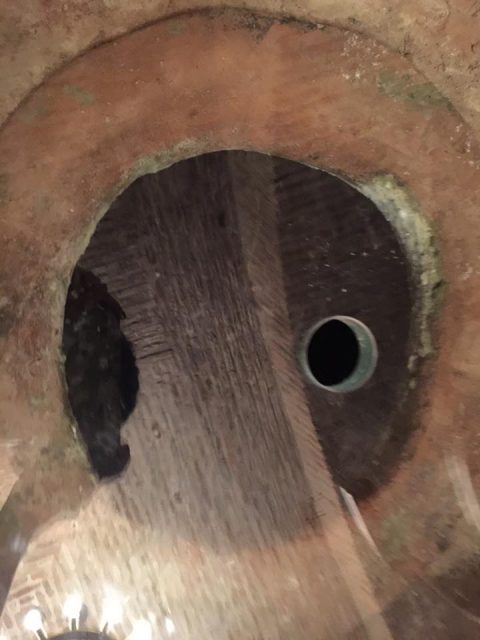 A 3,000 litre qvevri built in the 19th century is well preserved in Chateau Mukhrani’s wine cellar in Tbilisi, the capital of Georgia. The historic winery was deserted in Soviet times and was brought to life in 2003 by Marussia Beverages and a few Georgian investors. The winery has 120 hectares of vineyards and is capable of producing 400,000 bottles from 12 grape varieties including local and international grapes. 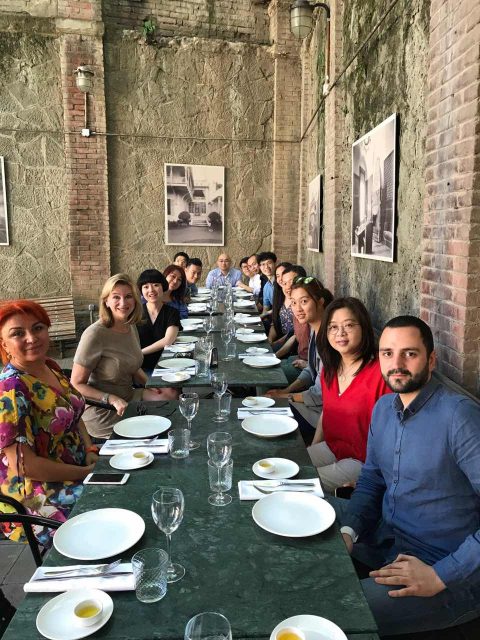 Fresh from airport, a group of wine merchants and journalists from Hong Kong led by Debra Meiburg MW landed at Cafe Litera, a contemporary restaurant inside Georgia Writers’ Association for a traditional Georgian Supra, meaning “feast”. Chef Tekuna, dubbed ‘Queen of Georgian cuisine’, is at the helm of this lush and eclectic restaurant. She also cooked last week for all the guests at La Cité du Vin in Bordeaux to celebrate Georgian winemaking history and culture. 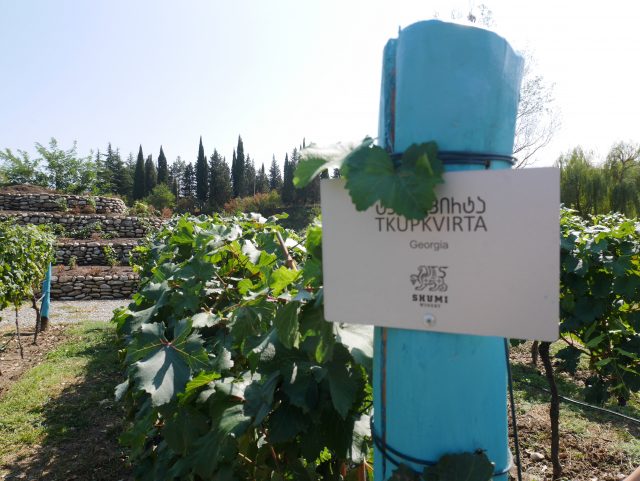 Boasting a winemaking history of more than 8,000 years, Georgia has more than 500 indigenous grape varieties. At Shumi Winery, located in Tsinandali area in Kakheti, is planted close to 300 indigenous varieties in addition to roughly 100 international varieties. Shown here in the picture is a grape variety called Tkupkvirta. 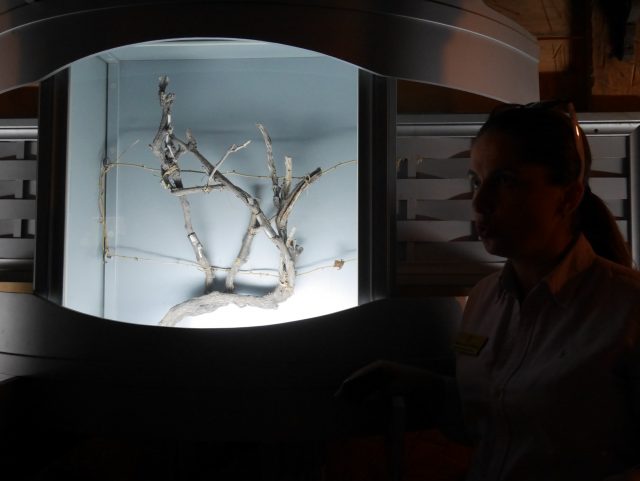 At Shumi Winery Maka Chavelashvili explains that winemakers used to wrap silver around vines, which would act as an anti-septic agent to protect them from diseases as shown in the picture. 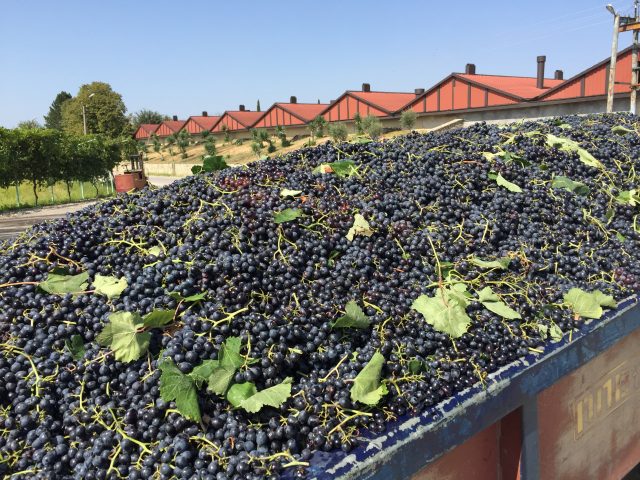 A truck load of Saperavi arrived at Telavi Wine Cellar, one of the biggest wineries in Georgia, ready for press. The winery uses both traditional qvevri method and European French oak and stainless steel to produce wines. Different from a few of the wineries visited by dbHK, the winery launched a range of single vineyard wines called ‘Kondoli’ that included a blend of Mtsvane and Kisi, a Saperavi and a Rkatsteli. 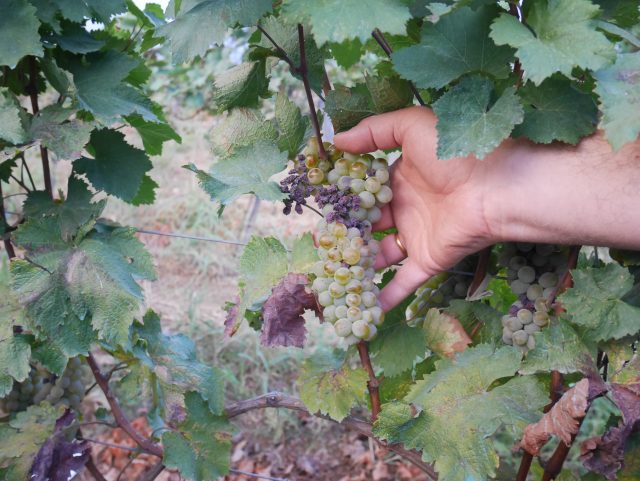 Referring to a bunch of grapes, David Buadze, owner of boutique winery, Shalauri, explains that this year’s drought in Kakheti area has adversely affected grapes in the region, leaving some of the grapes with severe sunburn and dried out berries. All of his wines are organically made in nine 2-tonne qvevris buried underground. 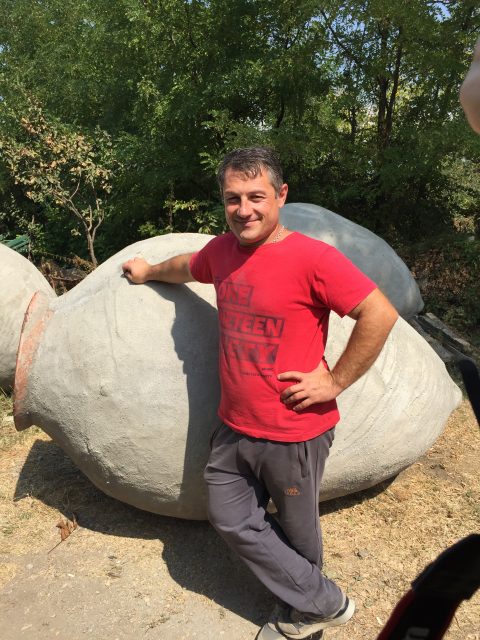 A fourth-generation qvevri maker, Zaza Kbilashvili, posing in front of a giant qvevri at his house. The skillful qvevri maker says it takes an average of three months to make one qvevri. Starting from its base, every day, he adds 10 cm before it’s completed, and the qvevris are kept in shady and humid conditions to prevent them from drying out, as seen in below picture. Noting that each qveri is different in shape and size, Kbilashvili reveals that the biggest qvevri he ever made was a 2.5-tonne clay vessel. Qvevri making normally starts in March or early summer depending on weather. The clay vessel can’t be produced if the weather is too humid.

After a qvevri is sculpted, it’s then toasted and dried in a specially built kiln, a three-walled thermo chamber, before it is coated with a generous spread of mixture (seen above) with limestone. This mixture is believed to be able to seal any cracks and serve as an anti-septic protection layer. The inside of the qvevri is coated with beeswax to seal any pores to form a water-tight surface. 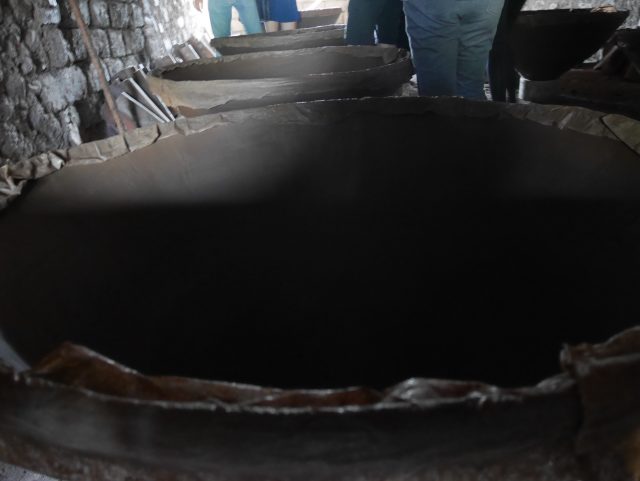 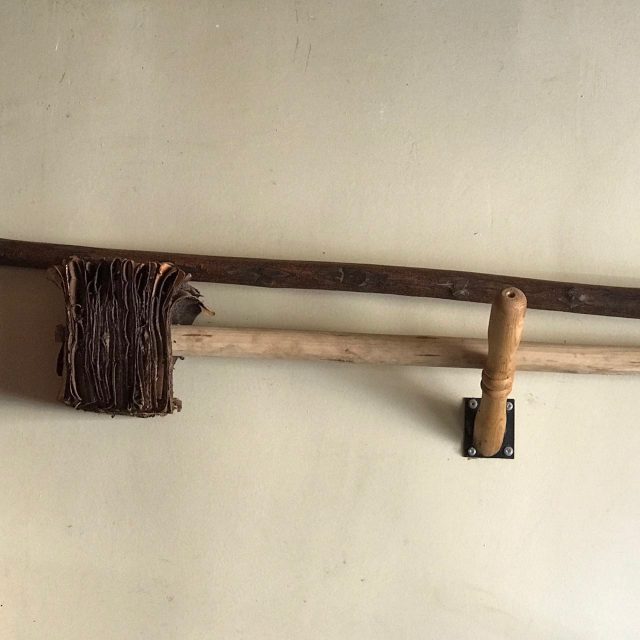 Qvevri cleaning is back-breaking work, and is essential for maintaining the quality of wines. It’s usually cleaned annually before the harvest. In the olden days, and still in some wineries, they would send slender workers down the qvevri to clean the inside of the vessel. Pictured above is a traditional cleaning tool made of cherry tree bark, and below is another cleaning tool made from spiky and sharp plants. 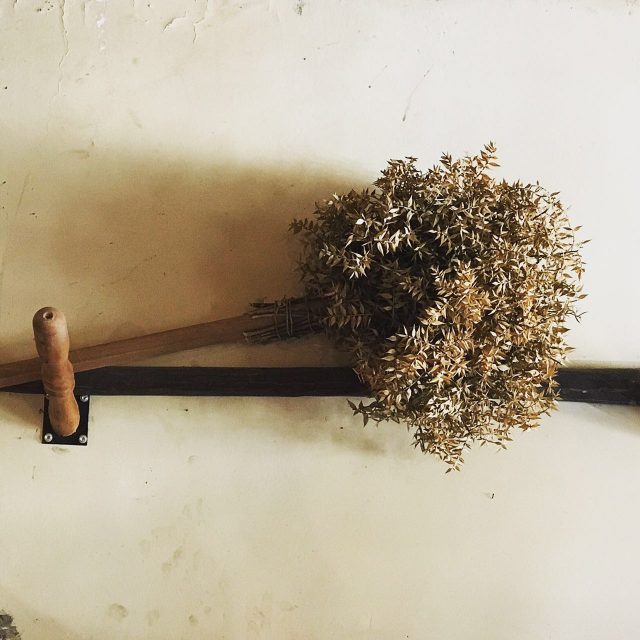 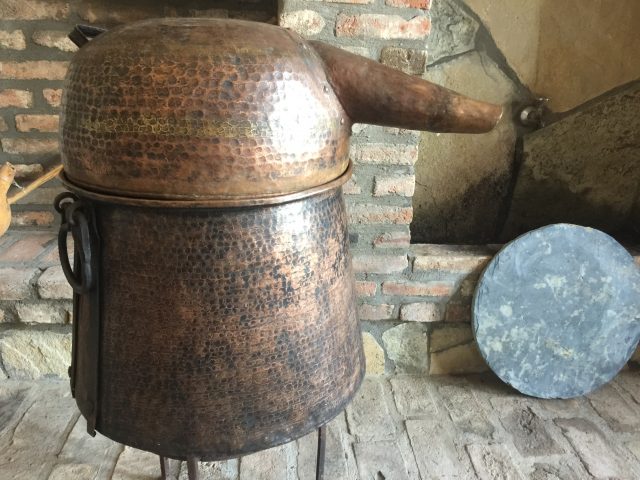 A pot still spotted at Vaziani winery. In addition to wines, most wineries in Georgia also make Chacha, a distilled spirit made from grape pomace with alcoholic strength ranging from 50% ABV to even 75% ABV. It’s usually transparent in colour but some wineries age the spirit in casks or barrels, which would give it a deeper amber colour depending on time spent in ageing. 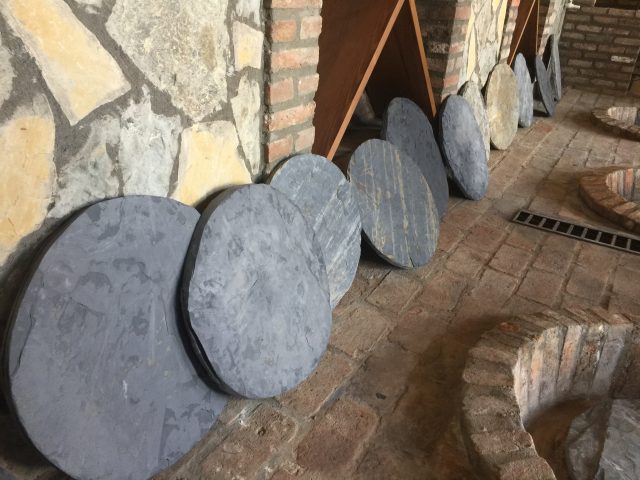 More and more often, wineries in Georgia are opting for slabs of slates or glasses to seal qvevris instead of clay mixtures to avoid contaminating the wines. Once the seal is formed, the wine is left to ferment in qvevri varying from a couple of months to a couple of years depending on wine style. 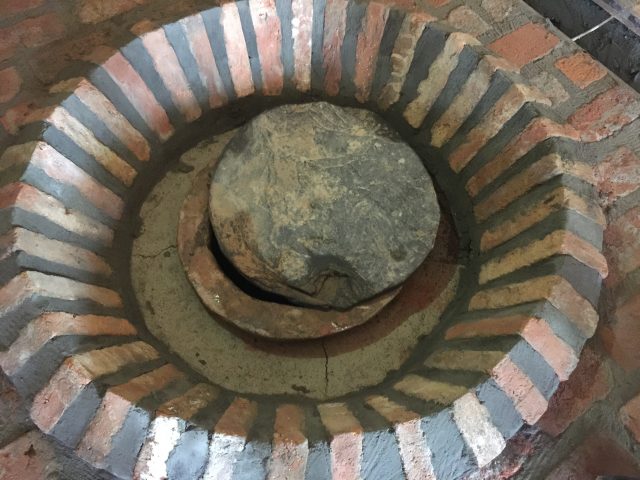 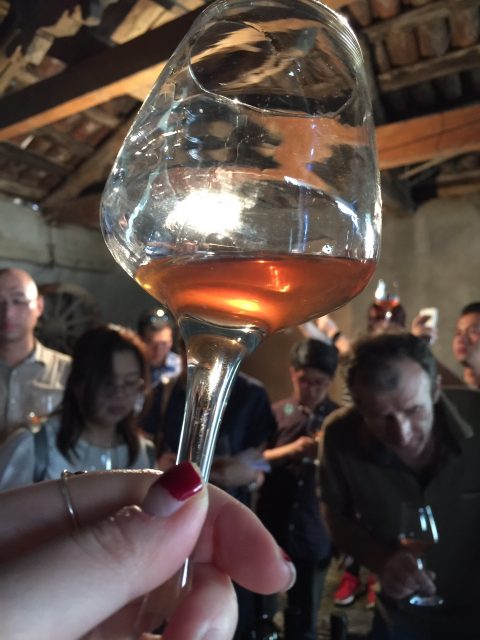 Most of the Georgian white wines are made with skin contact, giving them an intense amber colour as shown above. The wines are fermented in qvevri with skins, pits and sometimes stems as well, which helps to extract tannins for the white wines. Most of the wineries visited by dbHK produce natural wines without any addition of sulfur or chemicals, using some diluted sulfur water to clean qvevri openings to avoid contamination. Wines are often hazy as most are unfiltered. Some wineries are also making European style of wines, which means the wines are made without skin contact, and have gone through stainless tank or French oaks before filtering. 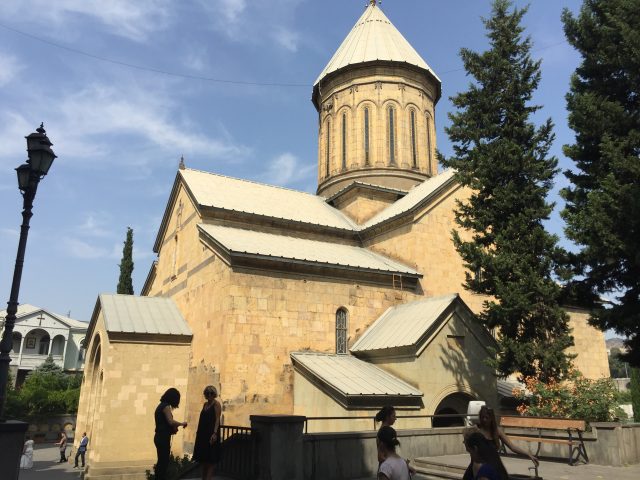 Tbilisi Sioni Cathedral in downtown Tbilisi is an ancient orthodox church first built in 6th and 7th century, and was later restored in 13th century. The Cathedral is said to house the sacred cross of St. Nino. The cross is rumoured to be made from vine branches bounded by the saint’s own hair. 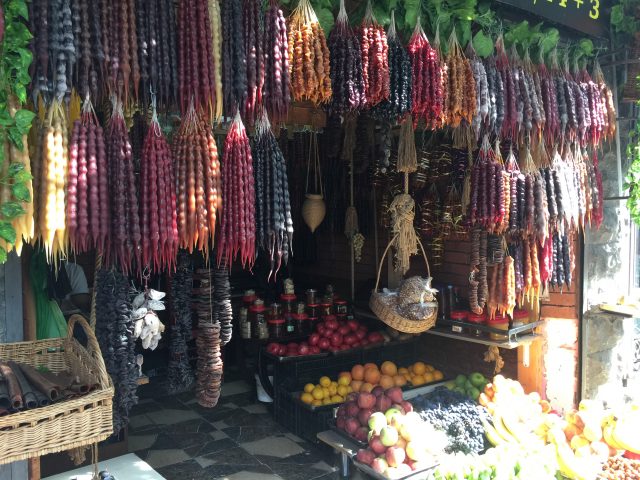 Strings of Churchkhela were seen hanging in a shop in Tbilisi. Churchkhela is a traditional Georgian dessert made with a string of walnuts dipped in a mixture of grape must and wheat flour. The dessert is then hung in open air for ten days before it dries up. 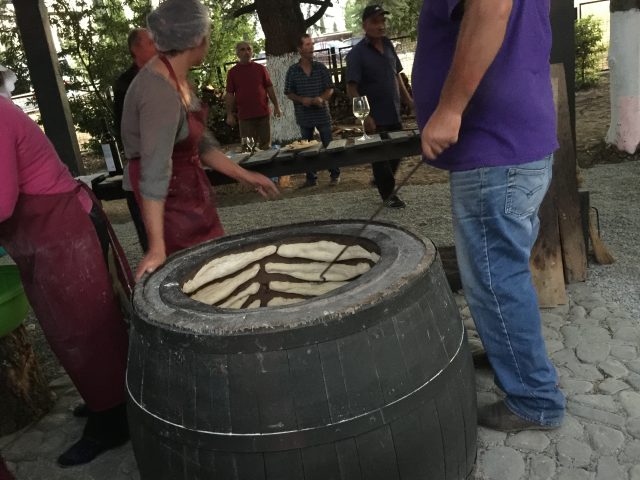 Bakers are making Georgia’s traditional Shoti bread at a wine festival hosted at the Georgian Wines & Spirits company in Kakheti region. The annual festival is hosted every year to celebrate harvest. 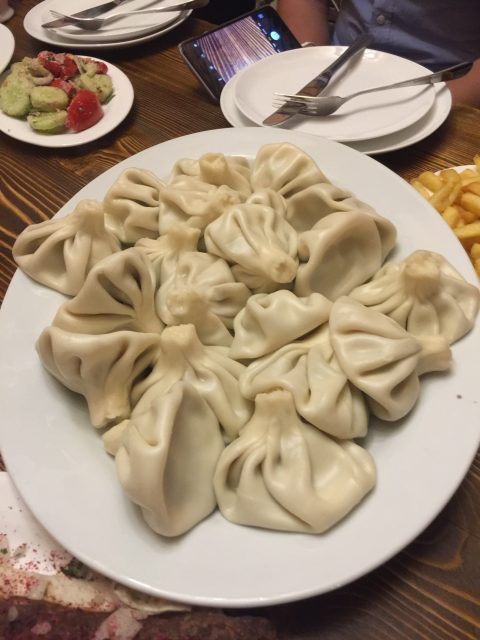 Georgian style dumplings, known as Khinkali, are made usually with a beef filling mixed with herbs. Alternatives can be used as well with pork, chicken, cheese and potatoes to name a few.