A group of thieves has reportedly used the Paris catacombs to dig into a private cellar and steal €250,000 worth of wine in an audacious heist. 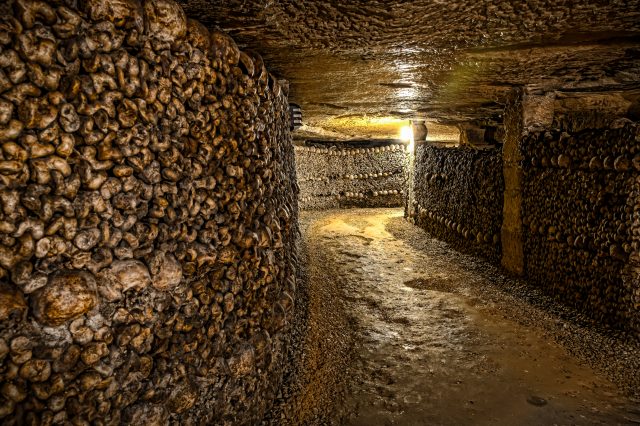 French police have said around 300 bottles were stolen from the cellar near the Jardin de Luxembourg in the expensive 6th arrondissement. The crime has been stated as taking place sometime between Monday and Tuesday this week although a subsequent statement from the Paris prosecutor suggested that as the owners had only just discovered the break-in it could conceivably have taken place at any point between late July and August.

Although what wines exactly have been taken was not revealed but all 300 bottles were “grand cru” according to reports in the French media and with a value of €250,000. Three hundred bottles equates to 25 12-bottles cases worth €10,000 apiece, although individual case prices would fluctuate hugely depending on the wine stolen.

The cellar abuts the famous Paris catacombs – which run for more than 150 miles (250km) beneath the city – and the thieves tunnelled in having very clearly targeted the cellar and then meticulously pinpointed its exact location. They then used the tunnels to escape. The tourists’ entrance to the catacombs is a short distance away from the Luxembourg gardens in the neighbouring 14th arrondissement. The underway is closed at night but various ‘cataphiles’ are known to find their way in to explore the spooky passageways, which house the bones of some six million people.

The thieves were no doubt aided in their robbery by the fact that the tunnels in the catacombs have signposts bearing the corresponding street names above them to help navigation.

“They didn’t tunnel through by accident,” a police source has been quoted as saying in the French media.

Unfortunately, with the ever-increasing value of certain fine wines the attention of criminals has turned to stock held by wineries and collectors.

A few years ago there was a rash of break-ins and thefts at producers such as Yquem, Palmer and Jacques Selosse – with thieves looking for both bottles and in the latter instance labels and other packaging items, perhaps with the aim of producing counterfeits.

In 2014, one of France’s foremost wine collectors, Michel-Jack Chasseuil, was held at gunpoint in his own home by a gang that wanted to raid his cellar – in the end they fled more or less empty-handed, foiled by the armoured doors and sophisticated security measures.

Nor is it just France where thieves have struck. Last spring a gang cut through the wall at Berry Bros & Rudd’s Basingstoke warehouse and made off with fine wines to the value of £100,000 and in 2015 thieves stole around US$300,000 worth of fine wine from The French Laundry restaurant in Napa on Christmas Day.