Tech it to the next level 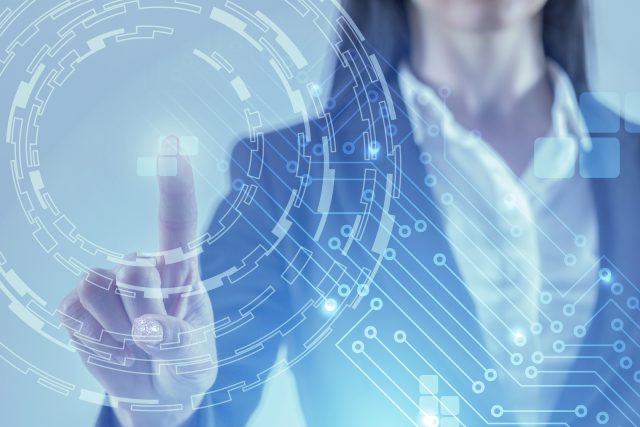 Anyone who has ever watched television will be familiar with adverts for price-comparison websites. Looking for car or home insurance? Then visit any combination of Gocomparetheconfusedmeerkat.com. Perhaps there’s a need for a grape-comparison website as an online educational tool? It could be called comparethemuscat.com.

Whatever one’s personal view of them, or ‘personal user experience’, they’re part of an ever-broader effort to make what are otherwise mundane, boring and time-consuming tasks faster and more efficient, freeing up everyone to do more important and interesting things – like watching price-comparison adverts on television during the ad breaks in Love Island.

This time last year we covered the work being done by the London International Vintner Exchange (Liv-ex) to develop ever-more efficient means of trading wines remotely and moving them through the supply chain with fewer risks and greater accuracy. This was being achieved through its Instant Transfer initiative, Standard In Bond Passport, Liv-ex Wine Identification Number (LWIN) and Unique Case Identifier.

The idea was so striking and being implemented so successfully that Liv-ex was given the award for ‘Supply Chain Initiative of the Year’ by this magazine. In the year since then, Liv-ex has come back again with what might, in very crude terms, be equated with a price-comparison tool for fine-wine merchants called Wine Matcher. It too won the Supply Chain Initiative at our awards, so what is Wine Matcher? What is it for and what can it do?

What is Wine Matcher?

Although they cultivate an image of constant bacchanalia on their social media profiles, if confined for long enough in a non-Michelin starred restaurant, fine wine merchants will admit 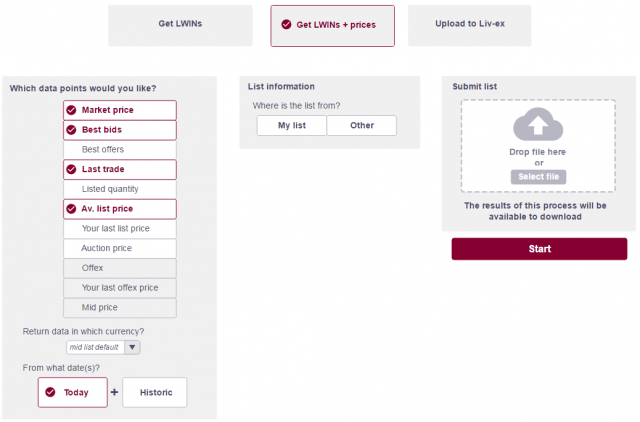 they spend most of their lives dealing with spreadsheets. A wine merchant’s life is increasingly one of graphs, spreadsheets and data points. As Liv-ex’s introductory video to Wine Matcher says: “The wine market, it all comes down to lists. Négociants’ lists, merchants’ list, brokers’ lists, private clients’ lists. Lists, lists, lists.”

James Miles, managing director of Liv-ex, describes Wine Matcher’s role: “Reading, preparing, pricing and deciphering long lists of wines is a fundamental part of a fine-wine merchant’s job. It is very time consuming and not always the most enjoyable part of the role.” As with Liv-ex’s other initiative to tackle the ponderous pace of fine-wine trading, Wine Matcher is designed to help merchants quickly and easily work through wine lists to determine prices, find trading opportunities and move stock through the supply chain.

It works by taking a list, and as explained by Wine Matcher’s developer, business analyst Nick Palmer, “takes a few words [from each name] and matches them against every instance of that word it has ever seen before”.

As Wine Matcher’s original ‘intelligence’ is derived from Liv-ex’s archive of more than 50 million records that have been collated over the past 15 years, this is quite some list. One can use Wine Matcher to find the appropriate LWIN code for a wine, or a vintage of a specific wine, or a particular bottle size of a particular vintage of a particular wine and all that again but with a specific case size. This is useful and necessary to get the most out of not only Wine Matcher but all the rest of Liv-ex’s various systems.

Then one can start adding prices into the equation, either historic prices over the past 15 years or the most up-to-date ones, using real-time trades on Liv-ex. Using Wine Matcher one could find the market price, best bids, best offers, last trades, average list prices and auction prices among others. One can also search in seven currencies: pound sterling, US dollars, Hong Kong dollars, euros, Japanese yen, Singapore dollars and Swiss francs. So, for example, a négociant sends through a list with its current stock inventory. You, the merchant, have to go through it and find the wines you want or need to buy.

“Wine Matcher will process 5,000 lines of data a minute and, says Palmer, is actually capable of being even faster than that”

For convenience’s sake we shall argue the list runs to 5,000 entries, which Liv-ex estimates would take a person at least a week to go through using the old methods of meticulously cross-checking that négociant’s list with your own, then checking Liv-ex or other sources to find the latest average or best list price; all the while manually inputting all of this new data into a spreadsheet yourself. It’s long and arduous and, like all tasks that require intense concentration over long periods of time, prone to error. And there’s nothing worse than having to re-check, find and correct a small error in a data-heavy spreadsheet.

With Wine Matcher, you would simply upload that list, choose the data points you desired, match the appropriate headings and let the tool run through it. Wine Matcher will process 5,000 lines of data a minute and, says Palmer, and is actually capable of being even faster than that. So the job that took a person a week has been done in a moment and the merchant now has a fully processed list they can work from rather than losing time organising it themselves. The tool could also be used for valuations.

Katrina Thuis, a member of the broking team at Corney & Barrow, had a chance to use Wine Matcher recently for a client – who, helpfully, sent in a complicated list. She explains: “We had someone with a large cellar (1,500 lines) split across several locations, with details on one central spreadsheet, who was interested in the approximate value.

As the wines were not with us, we did not have them matched against LWINs (which we do for as many wines as possible when they are in reserves with us, so we can give our customers up-to-date Liv-ex valuations). “I asked our chappie at Liv-ex if he had any bright ideas as to how I could standardise and match the wines on the spreadsheet I had been sent, and he proudly advised me that their new product Wine-Matcher may be just what I needed.”

Ironing out the creases 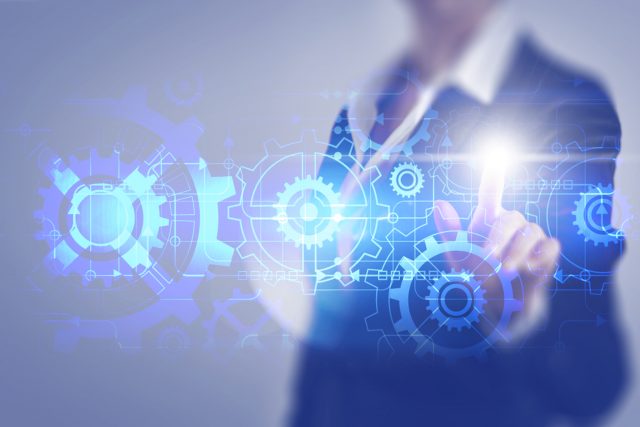 In this instance the client was apparently very happy with what was returned to them and has asked for a firmer valuation, which Thuis will now do, sticking to the ‘old ways’ for the time being. As Wine Matcher is still such a new tool, Thuis explains: “I don’t think that for Corney & Barrow we would get to the point where we could just run up one of these and send it out unchecked as an official quote, but the firming up of descriptions has helped incredibly, as have the guide prices.”

Overall, though, she estimates that Wine Matcher could “take days off the valuation process”, which she finds an exciting prospect and, indeed, calls the tool a “great concept”. It’s not exactly the level Liv-ex ultimately envisions Wine Matcher operating at, where, “it takes longer to write the email with the valuation than doing the valuation itself”, says Palmer, who also enthuses about merchants being able to conduct valuations for clients while on the phone to them.

That said, the speed at which the list was processed and at which Thuis was able to return to the client does back up Palmer’s statement that: “If you can come back [to you client] in half an hour, your customer service is going to improve.” It will take time for more merchants to use this new technology; it always does.

For this article, I asked fine wine merchants who had used Wine Matcher, the number was quite small and it was sheer chance that Thuis, a self-confessed lover of “geeky things”, had been able to try it out with exactly the type of list it was designed to handle.

There are other signs that it is still early days for Wine Matcher. Although it has millions of lines of data to call upon, it’s not as if it’s knowledge of fine wine is innate or omnipotent. It can confidently and accurately match the great majority of wines put to it, but some may catch it out, in which case once it has analysed all the data, those items with a question mark over them are flagged up.

There might be those items where the system thinks it has a match, for example between a Corton and an Aloxe Corton, and the user will have to choose the correct one. And there are times where it’s really unsure and might offer several suggestions, so the user, again, has to choose the correct option. If Wine Matcher hasn’t found the correct option at all (it will only ever download matches that are 100% confirmed) then the user can use the search function to find the wine they’re looking for in the Liv-ex library.

So it’s perhaps not utterly perfect or foolproof yet but, as Palmer states: “Once validated, the machine is unlikely to make that mistake again.”

And the more it is used and the more data it is fed, it will get not only more accurate but faster too.

Thuis has also suggested a few other points on function, such as adding an ‘undo match’ or ‘clear match’ button, after she accidentally matched a Burgundy to the wrong producer. New technology always has the sceptics and cynics out in force asking ‘what’s it for?’

Some will no doubt say they have no need of it and are happy with their own methods and systems. Many, I’m sure, looked askance at LWIN when it was introduced, and that is steadily becoming the technological ‘language’ on the systems of numerous merchants and logistics and warehouse providers. Wine Matcher could be the same; it’s there to use and it’s there to save time, freeing up merchants to speak to their clients, speed up trading and increase revenue.

For every wine merchant who has slaved and suffered over this menial task surely Wine Matcher must possess an indescribably allure – even if it’s just in the knowledge that the days of guilt-free long lunches could be upon us once more. db