This year’s Rosé Masters showed that while Provence still rules when it comes to making rosé, other regions – such as England, Turkey and Greece – are giving it a run for its money. By Patrick Schmitt MW 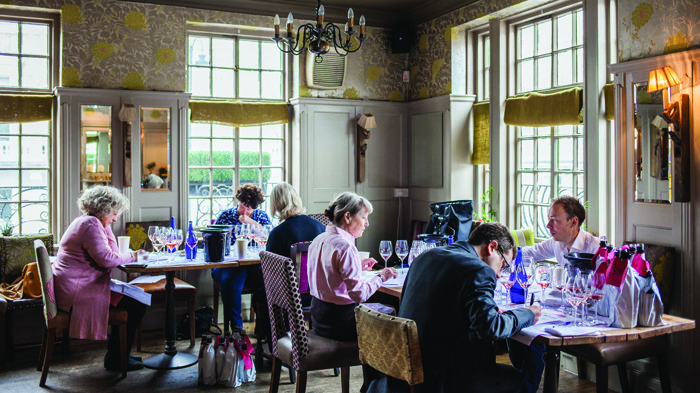 Let’s face it, hosting a tasting competition according to whether a wine were white or red would be ridiculous, quite simply because the colour provides a limited indication as to the character of the wine, and the breadth of style is practically endless. But, somehow, with rosé, such an approach – creating a wine competition just for a specific colour – is quite normal, and that’s because rosé is an indication of style, albeit loosely. 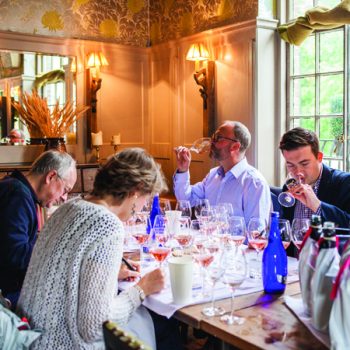 If you see something pink, one assumes it’s light in body, youthful, fresh, and tastes of summer berries. As for whether or not it’s sweet or dry, that too, tends to be judged by appearance – one suspects that the paler the pink, the drier the rosé.

But, although rosé is still, for the most part, a relatively simple, refreshing, strawberry-scented drink best served straight from the fridge, the range of styles has expanded vastly over the past few years. Not only that, but the quality levels have broadened too, with rosé moving successfully into the sphere of luxury drinks.

As for assessing the sweetness level according to hue, that is a dangerous game, particularly now every pink wine-producing corner of the world seems intent on creating a rosé as pale as those from Provence.

This diversification in style and quality, even if there seems to be an increasing standardisation in appearance, makes a tasting competition for nothing but rosé an extremely interesting experience. And, thanks to the current popularity of Provençal pinks, an exercise of great commercial significance.

The Drinks Business Global Rosé Masters is a competition for all styles of rosés from around the world. This year’s event saw almost 200 entries judged blind by a panel of highly experienced tasters. The best wines were awarded medals which ranged from Bronze through to Gold as well as Master, the ultimate accolade given only to exceptional wines in the tasting. The wines were tasted over the course of one day at Bumpkin in London’s South Kensington on 17 May. This report features only the medal winners.

NEW SOURCES
So what did this year’s Rosé Masters teach us? Well, we learnt much about the category, but, as with all our Masters tastings, the competition confirmed the superiority of certain places, while drawing attention to new sources of greatness.

And both outcomes are extremely useful. To tackle the former, in sparkling, once again we saw that the pinnacle of pink winemaking performance was found in Champagne. Here is a place already famous for making the best sparkling wines in the world, and this year’s Rosé Masters proved that this is just as true for pink, as well as for white variants.

Greatness was found at all price bands over £20 too, with Gremillet taking a Gold at the cheaper end of the Champagne spectrum, Lanson and Comtes de Dampierre doing similarly brilliantly in the mid-priced area, and then, at the top, Laurent-Perrier, particularly for its range-topping Alexandra Rosé from the 2004 vintage; which gained the ultimate accolade of the day: the title of Master.

This was well deserved, certainly, but such quality comes at a high price: this prestige cuvée rosé retails for more than £250.

As for those areas less well known for brilliance, in the sparkling rosés, the surprises came in the form of a lovely and relatively inexpensive pink fizz from Tuscany, along with, notably, a couple of first-rate examples from England. The judges awarded two Golds to Bolney Wine Estate in Sussex, both for vintage expressions, but from different harvests and with different dosages.

It was further evidence that England is becoming a serious source of fizz.

Moving to the still dry rosés – which made up the majority of the tasting – the competition showed that at lower price points (those wines under £10 in UK retail), the sources of quality were varied, although, as one might expect at these low prices, it was hard to achieve a Gold medal. 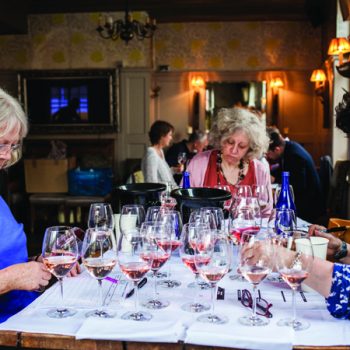 Nevertheless, the judges were highly impressed with the quality achieved for a wine costing a little over £10, which came from Rioja – and that was the Izadi Larrosa, hence its Gold-medal winning score.

Indeed, Rioja proved itself a first-rate source of good-value rosé based on Grenache and Tempranillo, with the region’s Ontañon Clarete also gaining a Gold.

(Rioja can also create brilliant top-end rosé – with the region’s Marqués de Murrieta the only winery to get a Gold in the £30-£50 price band, aside from famous Provençal producer Château d’Esclans.)

But staying in the sub-£10 sector, it was notable that a broad range of places are now making bright, appealing pink wines, including some areas that are less well known for rosé.

These included Lebanon’s Bekaa Valley, home to the excellent Château Ksara Sunset Rosé, and Penedès, home to the Ecologica La Pluma Rosé, made using organic Tempranillo, Merlot and Cabernet Sauvignon from Penedès in the northeast of Spain.

Once the judges began sampling wines from beyond the £10 barrier, but below £15, Provence, as one might expect, provided the benchmark in terms of quality and style. With a mix of just-ripe red fruits, a touch of peachy, oily palate weight and a refreshing finish, these extremely pale, rather delicate pinks are only made difficult to taste because they are hard not to swallow.

However, there is much quality variation in Provençal rosé, with some wines showing a leanness, and sometimes even a hard herbaceousness – and only the best had mastered the balance of fruit sweetness and citrus freshness, as well as that gently viscous mid-palate, cut short with that all important bone-dry bright finish. 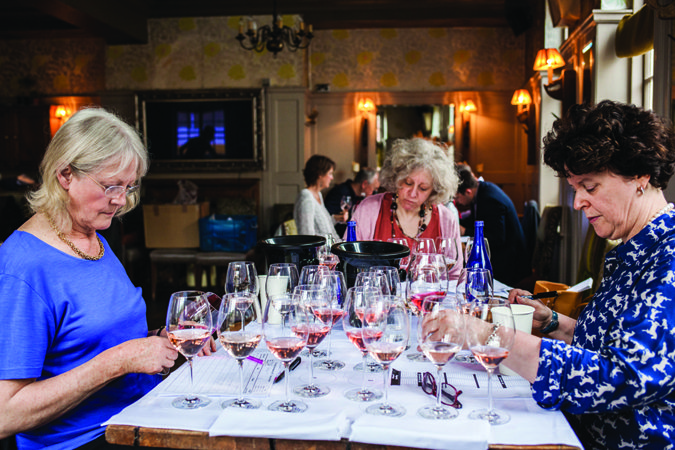 And you can see the producers that shone this year, some of which one would expect to perform well – from Mirabeau to Château Léobe, along with the wines from Famille Sumeire, Domaines Ott, Maison Saint Aix, and Château d’Esclans.

HIGH-QUALITY ROSÉ
But among the more pricey rosés, there were surprises.

One of these concerned the quality of pink wines from Greece, with La Tour Melas, Ktima Biblia Chora and Alpha Estate all gaining good scores from the judges.

Although none of these producers gained a Gold, the fact they were awarded Silver medals, and in the higher price bands of £15 and above – where the judges tend to be meaner with the scores – the results showed that Greece is making really high-quality rosé.

The final revelation from this year’s Rosé Masters concerned one particular producer, that, significantly, isn’t within the hallowed terroir of the Côtes de Provence. The appellation is the Languedoc, and the producer is Gerard Bertrand. Gaining one Master, one Gold and two Silvers, it is clear that Gerard Bertrand is the new name to watch in rosé.

Not only that, but for those who thought that luxury, barrel-aged rosés were the sole preserve of Sacha Lichine’s winery in the Côtes de Provence, then try Bertrand’s Château La Sauvageonne Rosé La Villa. From a plot high in the Languedoc, this layered, oak-matured rosé can play the role of a lip-smacking apéritif as well as a more grown-up, textured wine for serving with food.

Indeed, this particular wine is the first time we have come across a true rival for the barrel-aged Garrus by Château d’Esclans, and Bertrand’s range-topping rosé is half the price.

NEW TERROIRS
So, once again, our Global Masters tasting concept achieved its double aim of identifying new terroirs while testing the quality available in those that are already well-established.

And, concerning the latter, Provence may still be king, but it had better watch out – there are producers from outside this famous rosé region that are not only making pink wines with the same ballet-shoe hue, but in a similar style, and, most importantly, to an equally high standard.

Sparkling Brut rosé (up to 12gl/l)

And finally… some comments from the judges

Patricia Stefanowicz MW
“The rosé sparkling wines were delicious, showing high quality throughout…. Something of a surprise and a disappointment was that the dry still roses were shockingly inconsistent at every price bracket. And, origin had no bearing on whether the wines were delightful, modest or egregious. On a more positive note…The colours whether pale oeil de perdrix, mid-salmon hue or even cherry-coloured were a feast for the eyes. To be fair there were some very fine wines on display and some noted producers, e.g. Mirabeau, show why they are highly rated year after year with lovely concentration of flavour, yet delicacy of aroma and taste.”

Antony Moss MW
“I was impressed that there are so many regions represented in the silver and gold medal wines. I often buy a few bottles of rosé over the summer, and will definitely be buying a few more than normal this year. …There were some really good Provence and southern French roses with a sensitive touch of oak, rather ambitious in style and price but to my mind totally successful. The wines to which we gave Masters were astonishingly good. The Champagne – I would expect nothing less from that particular wine, but the Garrus and the Sauvageonne were of a level that I don’t believe I had previously experienced in dry still rosés.”

Beverley Blanning MW
“I came away from the tasting thinking that it’s actually quite hard to classify rosé wines as a single category when there are so many differences between them, both stylistically and in the wide range of grape varieties used. The tasting challenged me to rethink preconceptions of whether there is a ‘correct’ way rosé should taste. I liked the Provence wines a lot. The sparkling rosés were also generally very good. There were one or two delicious wines from Adelaide Hills and King Valley, Australia, and I loved the exuberantly gulpable Gamay from Toro. …The general standard of wines was very good, however, indicative of the success of the category and producers’ efforts to make serious rosé.”