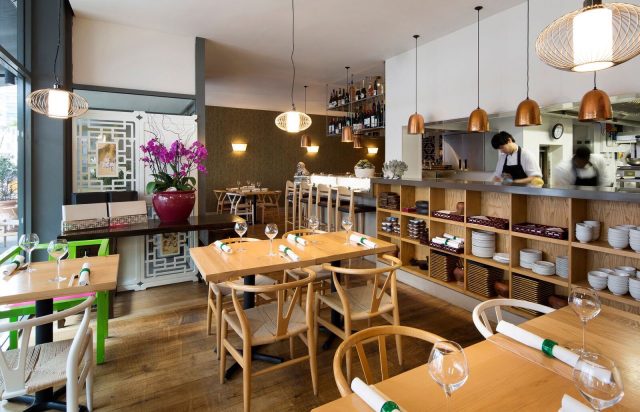 The concept: Anthropology graduate Andrew Wong spent a few years travelling the length and breadth of China, eating his way around the country in search of inspiration for his modern Chinese restaurant A. Wong in Pimlico, where diners are taken on a culinary tour of China without having to leave their seats.

Opening in 2013, A. Wong quickly won over critics and foodies with its excellent value dim sum and relaxed setting reassuringly devoid of red lanterns and waving golden cats.

The décor: With white walls and blonde wood floors, wooden chairs and explosions of purple orchids, the bright, airy décor has the feel of a high-end café and highlights how important the lunchtime service is for the place.

Low-hung copper lights hover in front in suspended animation in front of the open kitchen where an army of chefs huddle around sizzling woks silently working their magic.

The food: Andrew is a restless soul and his menu is constantly evolving to feed his curiosity and keep things interesting.

Lunch service focuses on dim sum, which can be ordered by the piece from just £1.20 with the most expensive, salt and pepper French bean fritters, coming in at £6.50, though the majority cost £2.

Pert pork and prawn dumplings are pleasingly salty, fatty and juicy, their crispy crackling topping adding welcome crunch. The prawn crackers meanwhile, are the size of small planets and come with an array of accoutrement from crispy seaweed to sweet chilli sauce.

Some of my favourite dishes were in the snacks section, inspired by the street food Wong discovered on his travels.

A pair of sweet and sour ribs with pork floss and toasted sesame was almost treacle-like in its sticky sweetness, the barbecued meat sliding off the bone like Monroe out of a silk nightgown.

One of the highlights of our decadent dinner was a humble noodle dish of pappardelle-shaped noodles loaded with garlic soy, chilli, sesame and dried fish, which was a masterclass in balancing hot, sour and salty flavours to great effect.

Signature dishes: The 63° tea egg with shredded filo is unmissable. Resting in a wild filo nest, the egg looks too beautiful to hack into, but the best way to enjoy it is to chop it up and let its gooey yolk moisten the baklava-like shards of deep fried filo. Clever and comforting, it’s the stuff of daydreams.

Chilli fiends should order Wong’s signature gong bao chicken with roasted peanuts. Swimming in a pool of hot and sour sauce, the Sichuan chillis make your tongue tingle like you’ve licked a battery.

While wine can be notoriously hard to pair with spicy food, a fragrant red from the Loire – Domaine Lavigne Saumur Champigny Vieilles Vignes 2014, was fresh and fruity with hints of blackberry and spice, and paired wonderfully with the bigger dishes.

Who to know: Andrew Wong is one of the friendliest and most humble chefs I’ve ever met, so it’s well worth seeking him out as unlike many well-known chefs, he can be found working the woks most days (and nights).

Don’t leave without: Heading downstairs to the clandestine opium den in the basement for duck fat-washed Old Fashioneds your head won’t thank you for the next morning. You’ll find the secret staircase hidden behind the wall at the back of the restaurant.

Keep an eye out for celebrities – on our visit we spotted silver fox David Ginola enjoying a bowl of noodles with his stunning French model girlfriend at an outside table.

Last word: Serving clever, well balanced and often downright delicious dishes in a relaxed setting for prices that won’t make your wallet weep, A. Wong encapsulates all that is great with the London casual fine dining scene.

While some dishes wowed more than others, the overall quality is consistently high and Wong have made a name for himself as a serious player in London’s contemporary Chinese food scene alongside HKK and Hakkasan.