For fans of the HBO hit fantasy series Game of Thrones, now there’s a new beer to drink with when the new season returns this month. 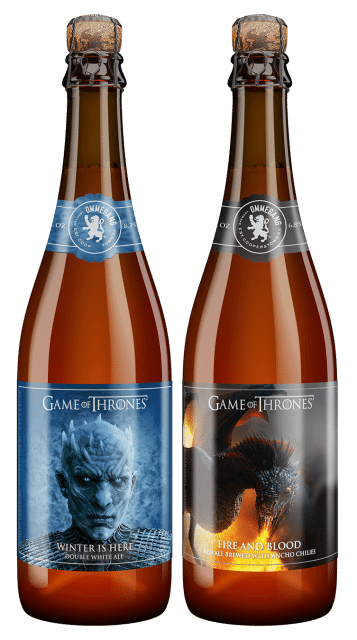 The latest beer produced by US-based Brewery Ommegang of Cooperstown in conjunction with the TV series will be aptly called ‘Winter is Here’, alluding to the imminent Great War as teased in the latest trailer.

‘Winter is Here’, an 8.3% AVB Belgian-style double white ale, features Night King, leader of the White Walkers, on its label. It will be available in 750ml single bottles, on draft, and also paired alongside previously released Fire and Blood Red Ale in a collectible gift pack complete with a commemorative glass.

This will be the ninth separate beer brewed by Ommegang under a licensing agreement with HBO after its first HBO-themed beer release in 2013.

“For six seasons, Game of Thrones fans like ourselves have watched as the great houses of Westeros battled amongst themselves, all the while knowing that the only battle that really mattered – the great war – was yet to come,” says Doug Campbell, Brewery Ommegang’s president, on its website.

“In this next season, we celebrate the long-awaited arrival of winter with a beer fit for consumption north of The Wall. Winter is Here is a fortifying and delicious double white, brewed with sea salt and white pepper, sure to keep you warm in winter, no matter how long it lasts.”

“Game of Thrones fans have been waiting for winter since the very first episode of the series debuted,” says Josh Goodstadt, vice president of Global Licensing at HBO. “Now, thanks to this latest Game of Thrones beer, they’ll have the perfect brew to sip throughout the cold months that lie ahead. We can’t wait for fans to get their first taste of Winter is Here!”

The new season of Game of Thrones will return on HBO on 16 July.