One Londoner has become a surprising symbol of resilience following the tragic events of this weekend after he was seen fleeing the London Bridge attack with a pint in hand, with social media users praising the man for showing true “British spirit” in the face of terror. 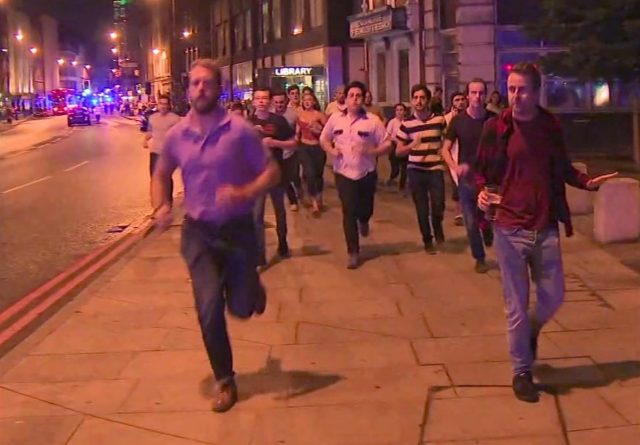 While those around him can be seen running down the street, away from the violence that claimed the lives of seven people and injured 48 more, many critically, the unidentified man can be seen walking with his pint, not spilling a drop, redefining what it means to ‘keep calm and carry on’.

Amid the horror, social media users took to Twitter to commend the individual, applauding his efforts to continue his evening, despite the atrocities, proving that not even a terror attack will stop the British from enjoying a pint. The image has since become a symbol of defiance in light of the horrific events of this weekend.

Others joked that of course the man would not have left his pint behind, given the price of drinks in the capital, while some have launched an appeal to find the man so they can reward him with a case of beer.

Most British thing I’ve ever seen is a guy running down the street away from a terror attack NOT SPILLING A DROP OF HIS GLASS OF BEER.

Guy who held onto his pint of beer while fleeing London terror attack is a drunken inspiration to all. https://t.co/pfS5EFM0WR pic.twitter.com/49VY1bE8X7

Evacuate? Well, OK. But this beer cost £6 a pint. I’m taking it with me. #LondonBridge pic.twitter.com/luPkuZxin6

Help us find him! We want to give him a box of beer. Pls #RT In face of cowardice and terror this sums it up for us: London. Beer. Defiant. pic.twitter.com/2dECtGO2GP

That’s the British spirit! Beer at those prices have to be taken with you..! Bravo sir! https://t.co/s9dbSCxuEA

Seven people were killed on Saturday night after a white van ploughed into pedestrians on London Bridge at 10.08pm. Three men then jumped out of the van and went on a rampage through several bars and restaurants in and around Borough Market, stabbing people at random who had been enjoying a evening out.

Police arrived on the scene and shot dead three suspects within 8 minutes of receiving the emergency call for help.

So far, the identity of one of those killed has been confirmed. Canadian national Chrissy Archibald died after she was stabbed in the neck while out for a meal with her boyfriend. A French national, who has not been named, also died on Saturday night.

This morning, London Bridge has reopened, but the police cordon surrounding the scene, which stretches along much of Southwark Street and its surrounding streets, is still in place.

In a statement released on Sunday night at 10pm, the Met Police’s Assistant Commissioner Mark Rowley thanked the media for not speculating about the events and identities of those involved, adding: “‘I would like to assure them [the media] and the public that this is directly assisting the progression of the investigation and confirm we will release the identities of the three men directly responsible for the attacks yesterday, Saturday, 3 June, as soon as operationally possible.

“Officers have been working tirelessly to process the crime scenes and release the cordons. We are hopeful that some of the cordons around London Bridge station will be released during the course of tomorrow morning but consult TFL website before you set out on your journey’s into and around London tomorrow.

“The public can expect to see additional police – both armed and unarmed officers – across the Capital as you would expect in these circumstances. And our security and policing plans for events are being reviewed, the public will also see increased physical measures on London’s bridges to keep the public safe.”