Today is the feast day of St Dunstan, not a patron saint of beer or wine as such but, legend has it, he once made a deal with the Devil to blight some cider trees with frost. 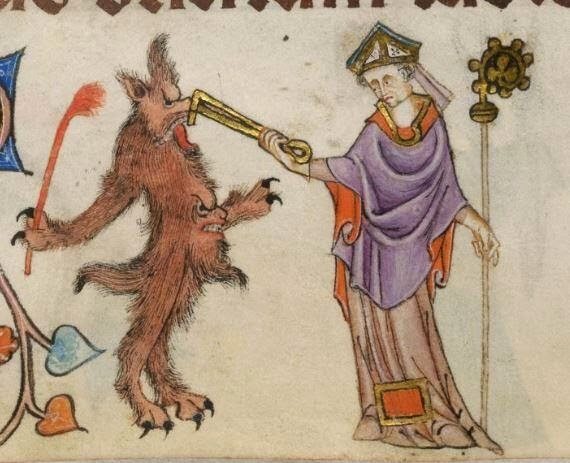 Dunstan was born (it is thought) in the early 10th century near Baltonsborough in Somerset, the son a nobleman.

He joined the church at a young age and rose to become first Abbot of Glastonbury and then by degrees, Bishop of Worcester, then London, and finally Archbishop of Canterbury.

He was, reputedly, a skilled blacksmith and jeweller and is generally venerated as a patron saint of smiths.

In his various roles as bishop and archbishop he worked hard to restore monastic life in England and reform the English church.

Dying in 988 he was canonised in 1029 and until Thomas Becket’s martyrdom in 1170 he was considered England’s favourite saint.

His association with silversmithing meant that for a good 600 years the London Assay Office hallmarks ran from 19 May (his feast day) to 18 May the following year. This was only changed in 1660 when Charles II moved it to his own birthday, 29 May.

There are several legends associated with Dunstan and the Devil, in the most famous of which he resists temptation and tweaks Lucifer’s nose with a hot pair of smithing tongs. As the folk rhyme relates:

“St Dunstan, as the story goes,
Once pull’d the devil by the nose
With red-hot tongs, which made him roar,
That he was heard three miles or more.”

There is another piece of folklore though which is rather more pertinent to the drinks industry and which seeks to explain the late May frosts, known as ‘Franklin Days’ in the West Country, which often hit between 17-19 or 19-21 May.

The tale was apparently particularly popular in Devon in the 19th and 20th centuries and goes thus.

Dunstan had bought some barley and made some beer, which he then hoped to sell for a good price. Seeing this the Devil appeared before him and offered to blight the local apple trees with frost (the tale is presumably set in Somerset, perhaps when Dunstan is Abbot of Glastonbury). This would ensure there was no cider and so drive demand for beer. Dunstan accepted the offer but stipulated that the frost should strike from the 17-19 May.

As stories go this comes close to blackening the good name of the saintly man who tweaked the Devil’s nose and the legend likely arose among disgruntled cidermakers who perhaps thought Dunstan wasn’t doing enough to protect their crop on his feast day.