On this day in 1933 the Cullen-Harrison Act was enacted, allowing many thousands of Americans to buy their first legal beer in over a decade. 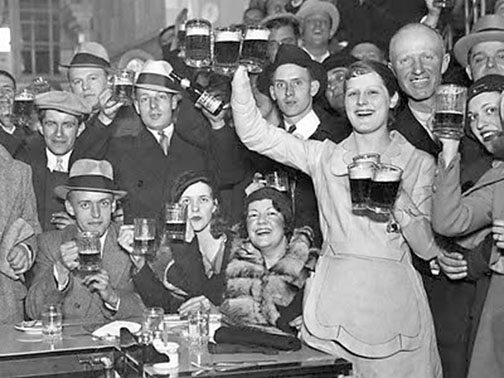 The act, which was sponsored by Senator Pat Harrison and Representative Thomas Cullen, was signed by President Franklin D. Roosevelt on 22 March, after which he famously remarked, “I think this would be a good time for a beer.”

The law did not go into effect until 7 April however but in anticipation Americans all over the country flocked to local breweries on 6 April and camped out in much the same way as some people do today for the latest release of new smartphones or shoes.

The law did not end Prohibition, which had been in place since 1920 following the passing of the Volstead Act in 1919.

Rather, the Cullen-Harrison Act redefined what constituted an alcoholic beverage. Under Prohibition, an “intoxicating beverage” was any drink with an alcoholic content. The act of 1933, however, legalised the sale of beer and wine with an alcohol content of up to 4% by volume in states that had recognised the law and passed it in their own chambers.

On 7 April breweries were thronged with happy Americans who consumed, it is estimated, around 1.5 million barrels of beer.

Prohibition was fully repealed later that same year on 5 December.