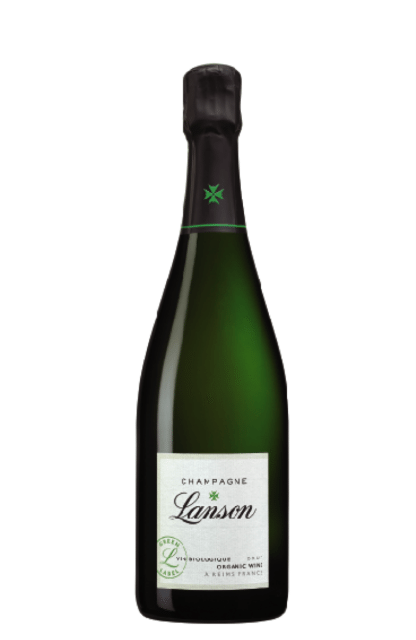 Lanson is to become the largest house to launch an organic Champagne when it officially unveils its Green Label later this year.

Lanson, which is currently the ninth-largest Champagne brand in the world, is using certified organic grapes for a new cuvée from 13 hectares of vineyards in the Marne Valley around the village of Verneuil. These vineyards – which had been managed biodynamically – were acquired in 2010 from Leclerc Briant, having come up for sale after owner Pascal Leclerc Briant died in October of that year. Since acquiring the land, Lanson has used 8ha of the plot to produce an organic base wine, before deciding to create an organic non-vintage Champagne using the 2012 base wine – an excellent harvest in the region that produced the required quality for the Green Label, according to Paul Beavis, managing director for Champagne Lanson UK and international markets.

The organic Champagne, housed in a recyclable box, is being made in the Lanson style, which means that the base wine will not undergo malolactic fermentation, and hence the decision to age the Green Label for more than three years on its lees in the Lanson cellars – the long maturation period offsets the high level of malic acid in the Champagne. 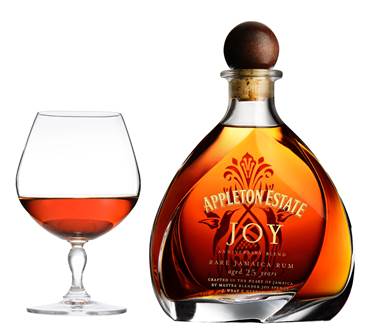 Jamaica’s Appleton Estate is celebrating the 20-year anniversary of its master blender Joy Spence with the launch of a limited-edition 25-year-old rum called Joy.

Joy Spence joined Appleton Estate in 1981 as chief chemist, having graduated from the University of the West Indies with a Bachelor of Science in Chemistry and the University of Loughborough with a Master of Science in Analytical Chemistry. She became master blender in 1997, with 2017 marking 20 years with the estate. To celebrate the milestone, the Campari UK-owned rum producer has released a limited-edition Appleton Estate Joy Anniversary Blend – a 25-year-old rum – which also includes rums aged up to 35 years.

“It includes two rum marques that are of particular sentimental significance to me: the first of these marques was laid down to age in 1981, which is the year I joined the Appleton Estate team, and the second is my favourite marque of pot-still rum,” said Spence.

The rum is said to open with a delicate orange peel top note, with ginger and spice, and finishes with notes of warm vanilla, butterscotch, coffee and layers of almond and toasted oak. 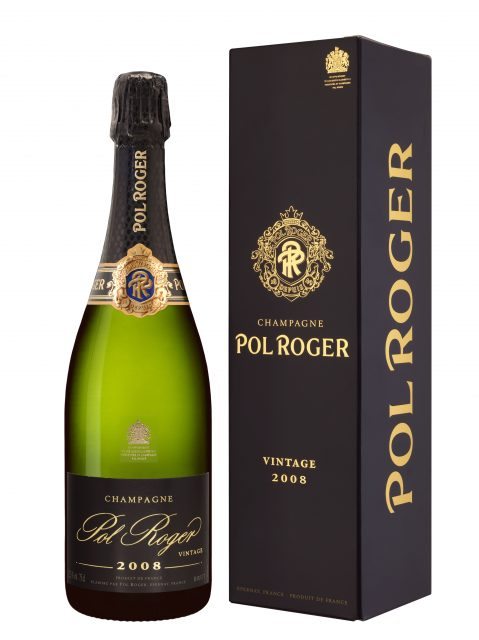 Champagne Pol Roger has released its 2008 Brut Vintage, which the house has hailed as one of its top 12 vintages since its foundation in 1849.

Made from the traditional house vintage blend of 60% Pinot Noir and 40% Chardonnay, from 20 Grands and Premiers Crus vineyards in the “Montagne de Reims” and the “Côte des Blancs”, the 2008 vintage is produced only in limited quantities and has been aged for eight years on its lees before being disgorged and released. In his tasting notes, James Simpson MW, managing director of Pol Roger Portfolio, described the 2008 Brut as having “excellent purity and refinement on the nose” with complex autolytic characters of toasted bread and pastry, red fruits and a hint of spice.

“Champagne Pol Roger takes vintage Champagne very seriously, and this is a serious vintage,” he said. “The house of Pol Roger has never shied away from crafting their wines to an exacting standard, ensuring the wine ages longer and develops complexity, the standard first established by Monsieur Pol Roger in 1849. We make vintage Champagne to last, and this wine has all the hallmarks of a classic Pol Roger vintage, with ample concentration and richness to develop over the next 20 years.” 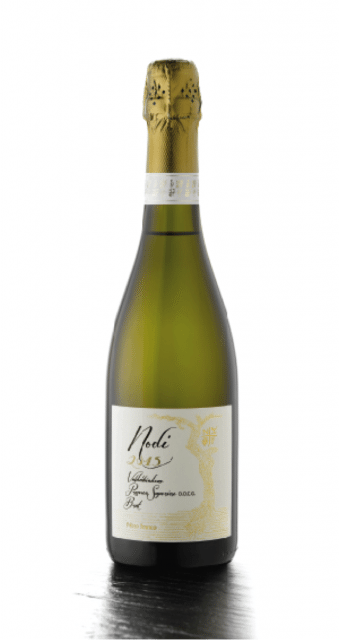 Inspired by the “wrinkled, knotty and callous” vines of a small parcel of land in the Valdobbiadene, Nino Franco has produced its third single-vineyard Prosecco.

Nodi 2015, whose name translates to ‘knots’ in Italian, is made with grapes sourced from a small parcel of land in the Valdobbiadene known as Col del Vent. While not a designated ‘rive’ – the name given to premium vineyards that lie on steep land in the DOCG region – Col del Vent is a plateau which at certain points drops down to become like a rive, says Primo Franco, head of the company, who stumbled upon the site in 2014.

“I was dazzled when I first walked among those rows,” he said. “The size and knottiness of the trunks and vine-shoots covered by young and old beautiful leaves are an expression of harmony as if a haute couture model.”

Bordeaux producer Château Fleur Haut Gaussens has released a 100% Malbec in the UK with the intention of offering the UK market “something exciting that they had not seen in Bordeaux before”.

La Viminière is a small single plot situated in Vérac on the right bank of the river, near Fronsac, with its six-year-old vines planted in a south-facing plot composed of clay soil.

Created with the help of wine consultant Olivier Dauga, La Viminière represents a departure from conventional Bordeaux winemaking techniques, with 50% of the harvest fermented as fully ripe whole bunches. A slow winemaking process of approximately 25 days included soft extraction and a short maceration, with the wine aged for eight months in 400-litre new French and American oak barrels. The resulting wine is described as “complex” with aromas of “ripe blackberries, tobacco, peppery spices and plush, sweet tannins”.

Italy’s Cavit has released a new rosé under its Mastri Vernacoli label, produced from its vineyards in the Lagarina Valley in Trentino. Made from 100% Pinot Grigio, grapes were hand-picked and crushed with the must – including the skins – then cooled to around 8°C and left to macerate for around four to five hours before being pressed and fermented at 18°C in stainless steel tanks.

The resulting wine is described as having “fresh and floral aromas on the nose” and crisp on the palate with notes of yellow apples and pears. 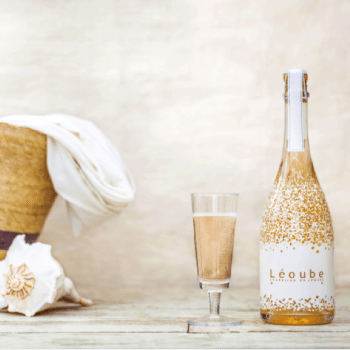 Château Léoube has released a sparkling wine that it says is unique to Provence.
The Blanc de Noirs organic sparkling wine is made from a blend of Cabernet Franc and Cinsault in the traditional method with a zero dosage, with nine months on lees before disgorging. “Very few sparkling rosés are made in Provence, so this is an interesting and highly promising initiative,” the château said.

“Showing just the barest blush of pink, it is subtle on the nose and palate with delicate notes of hazelnut, aniseed and soft fruit.”

Hofmeister, a Scottish lager that made a name for itself throughout the 1980s in the UK thanks to its mascot, George the bear, has been relaunched as a German craft beer – Hofmeister Helles 5%. The Hofmeister brand was well known throughout the 1980s for its advertisements, whose slogan was “follow the bear”, featuring George, a bear sporting a shiny yellow jacket and pork pie hat.

The brand was axed in 2003, but has now been taking over by a group of independent UK entrepreneurs. In November of last year, the Hofmeister brand was relaunched as a 5% abv Helles lager, made in Bavaria by a fourth-generation family-owned brewery.
Working with Marstons PLC, the revamped beer is available in 330ml bottles and 50-litre kegs in bars and
pubs nationwide.

Staglin Family Vineyard has released its 2013 estate Cabernet Sauvignon, made from its vineyards in Napa’s Rutherford Valley. Staglin described the 2013 growing conditions as “spectacular”, with early bud break followed by an extended stretch of warm weather. Nearly-ideal conditions during flowering resulted in a great fruit set, with very warm and dry weather continuing through the late spring and into the early summer. Temperatures began to drop in the midsummer. “slowing down ripening and allowing flavors to develop more deeply”.

This wine, made from a blend of 87% Cabernet Sauvignon, 7% Cabernet Franc and 6% Petit Verdot, was aged in 93% new French oak barrels for 20 months. “Like a chiseled and sinuous boxer sitting in his corner, the youthful and deep 2013 Staglin Cabernet is a wine of controlled power that is poised to showcase its long, silky and fine-grained structure,” said Staglin of its latest release. 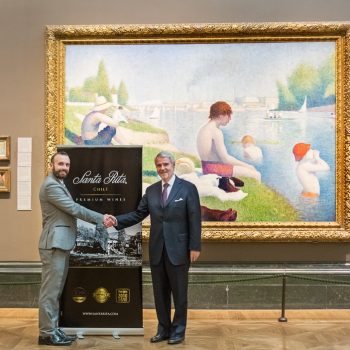 Viña Santa Rita has partnered with the National Gallery Company to launch a new range of limited-edition wines featuring some of the London gallery’s most famous artworks on the labels. The new National Gallery Series includes five wines; a Sauvignon Blanc, a Chardonnay, a Cabernet Sauvignon, a Pinot Noir and a Merlot.

As part of the three-year deal, the labels will be renewed over time, allowing Santa Rita to make the most of the 2,300 works of art in the gallery and to which it has been granted licensing rights to. The first five pictures to feature on the labels include Vincent van Gogh’s Sunflowers and A Wheatfield with Cypresses (on the bottles of Cabernet Sauvignon and Sauvignon Blanc respectively), Geroges Seurat’s Bathers at Asnières (the Chardonnay), JMW Turner’s The Fighting Temeraire (the Merlot) and Camille Pissarro’s The Boulevard Montmartre at Night (for the Pinot Noir).

Baltazar Sanchez, chairman of the board at Santa Rita, said: “In keeping with its own cultural heritage, Viña Santa Rita has become known for promoting culture and education through the arts, including the permanent exhibition of the valuable ethnographic collection hosted in the Andean Museum at the winery, which belongs to the Claro Vial Foundation.

This new alliance with the National Gallery Company aims to promote Chilean wine and the visual arts, both nationally and internationally, through the museum’s most well-known paintings, combining the art of painting and the art of winemaking. As one of the top exporters of premium Chilean wine to the UK, it is both a privilege and an honour for Santa Rita to support such a prestigious and historical national treasure as the National Gallery Company, London.”

Colin Chester, head of buying at the National Gallery Company, added: “We are delighted to have formed such an ideal licensing agreement with Santa Rita. We are bringing together the finest of wines from Chile, the exemplary contribution Santa Rita has made in their involvement in art and culture in Chile and now we are additionally able to extend the awareness and reach of the National Gallery through the use of the images on the labels to new wine consumer audiences outside of the National Gallery.” The wines will be available at both Sainsbury’s and Laithwaites, with the former selling the Pinot Noir and the latter the Chardonnay and Merlot. A portion of the profits will go back to the National Gallery.