The fake, the fraudulent and the lookalikes at Chengdu Wine Fair

People say everything is possible in China and some folks take this to heart, making the impossible, possible: conjuring up a suspiciously Petrus-like label and a commemorative wine from Château Cheval Blanc called ‘Clos du Cheval Blanc’. Both ‘unicorn’ wines are just a series of deliberately misleading to downright fraudulent wines we spotted at the Chengdu Wine Fair this week.

The Chengdu Tangjiuhui (糖酒会) or formally known as the China Food, Wine & Spirits Trade Fair, is reputed to be the biggest trade fair for wines, spirits and beers in China. It’s indeed an important event on trade calendar for wineries to touch base with local distributors spread out across China.

Held in the capital city of China’s southwestern Sichuan province, the fair is actually split into two parts: taking place between 19-22 March and 23-25 March.

The first part is held throughout the city at various hotels with the two main ones being the Shangri-la and Kempinski, while the second part is convened at the Chengdu Century City New International Convention and Exhibition Center.

For a fair of this magnitude, you will be sure to see not only new wine releases but also plenty of fraudulent and outright counterfeit wines from what they call ‘DIY Penfolds’ to look-alike Bordeaux first growths.

Most of the suspicious wines we’ve spotted so far were seen in the Kempinski and a couple at the main Chengdu wine fair.

What’s particularly shocking about the fair is that these wines and their distributors are not exactly hiding from the spotlight. At the Kempinski, dbHK saw large posters of counterfeit wines or merchants carrying signs hawking doctored ‘Penfolds’ at the hotel entrance.

Here we’ve rounded up all the suspicious wines we’ve seen so far. Click through the slides to discover the wines. 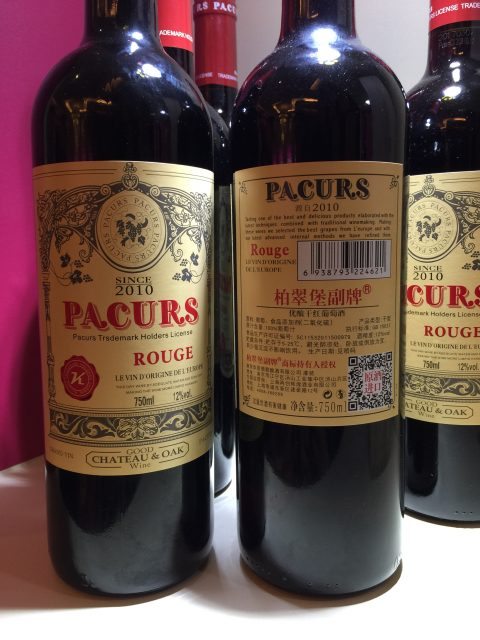 The biggest surprise at the Chengdu wine fair is that we apparently managed to find Petrus’s second label, which, of course, doesn’t exist.

This Chinese look-alike has all the trappings at first glance, with a label design strikingly modelled on that of the famous Bordeaux wine but, though verging on the blatantly misleading, it was proudly presented at the Kempinski hotel.

The company responsible for making the wine has a wall-sized poster plastered on the third floor of the hotel by the fair’s busy escalator.

The front label to claim its trademark rights but the kicker is the company did not even get the word “trademark” right. In its own words, it wrote, “Pacurs Trsdemark Holders License”. As if that’s not reassuring enough, On the bottom, it reads “Grand Vin” and “Good Chateau & Oak wine”.

When asked about how the wine is made, one sales person was quick to explain the wines are shipped in bulk and mostly bottled in boats moored near Chinese ports. The back label bears the revealing admission it is a ‘Vin d’origine de l’Europe’. So not even French potentially.

The wine apparently sells from RMB 20 (US$3) to RMB 50 (US$7.36) wholesale depending on whether the wine is bottled on a boat or somewhere in Europe, but definitely not at Pétrus for sure. 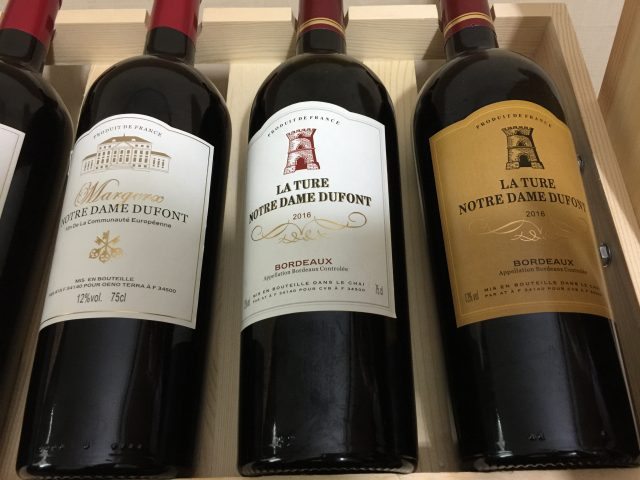 Anything look familiar? Yes, that’s a close imitation of first growth Margaux’s famous château on the label. The company making the look-alike first growth prides itself on making rip-off Latour and Margaux, to the extent that its company name is Zhejiang Gold Chateau Latour International Trading Co Ltd.

The salesperson peddling the misleading wines was passing out brochures in the hallway on the sixth floor of the Kempinski hotel and shouting the first growths’ Chinese names to passers-by for attention.

Even when dbHK confronted him and pointed out that his wines were not first growths, he demonstrated some serious spinning skills and said, “only the trade knows the difference. If you sell it to consumers, most wouldn’t even know. We are all just playing Ca Bian Qiu (擦边球),” referring to the Chinese term, which is roughly translated as ‘playing games where the balls are nearly out’, to mean taking advantage of loopholes.

Note that the ‘Margaux’ lookalike (and the name ‘Margaux’ seems curiously spelled) is a ‘Vin de la Communauté Européenne’ as well.

Will the real Lafite please stand up? 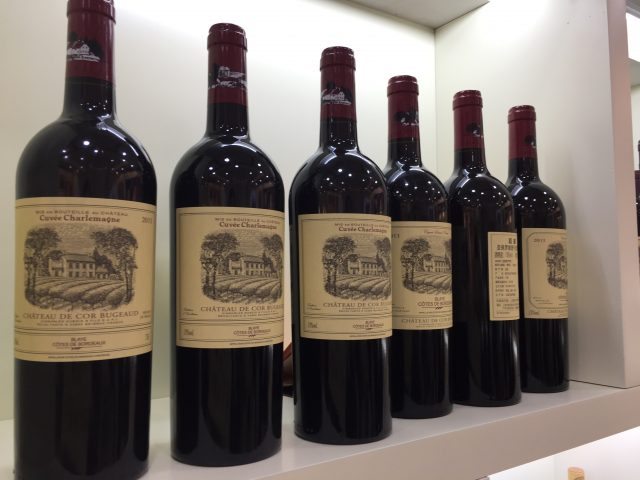 The company is a Shanghai-based wine merchant called Giantsail. The first growth actually took the company to court some years ago but surprisingly the Chinese company won the case and was able to argue it has been using the name long before Lafite’s name came to be known in China.

In order to prove its legal standings, Yu Xiaolong, vice general manager of the company, showed us the original copy of the court ruling inside its booth on the first floor at Kempinski hotel.

Outside the booth near the entrance, there was a giant sign that reads “中国唯一合法拉斐“, meaning “China’s only legitimate Lafite” – as it claims to be.

Our lady Mouton of Languedoc 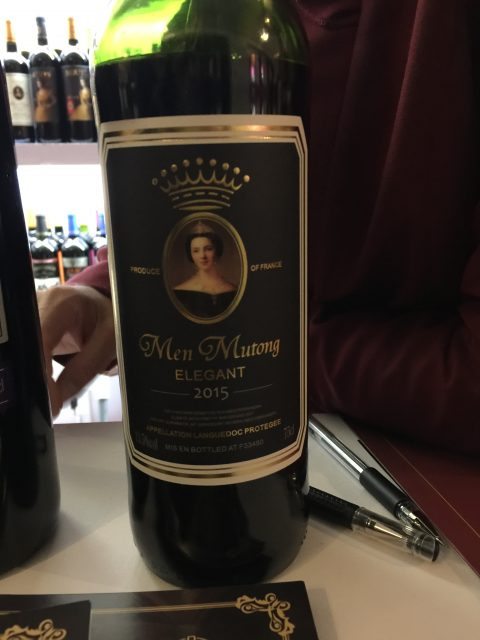 Another novelty we discovered at the wine fair is this wine that’s literally translated as ‘Lady Mouton’.

The wine was spotted also on the first floor of the Kempinski hotel. 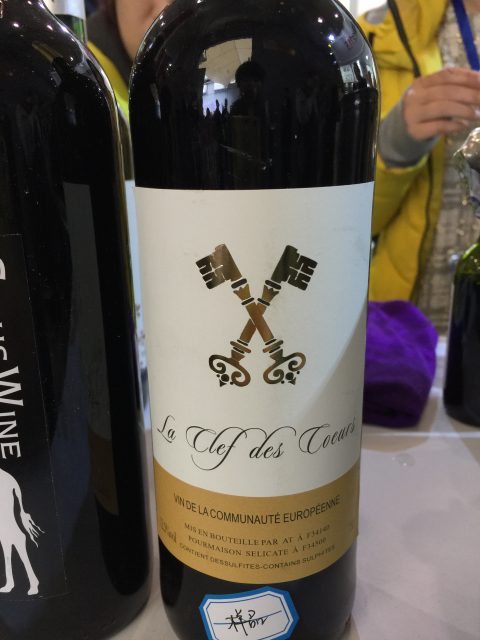 This wine is trying its best to pass muster as something from the stable of Bordeaux mogul Bernard Magrez by having the double key emblem and a look-alike line that reads ‘La Clef des Coeurs’, in similar style to the actual company’s own motto that appears on its bottles: ‘Les cles de l’excellence‘.

Judging by its price and the poor English information written on the label, there’s nothing “excellent” about this wine. Again, it is a ‘Vin de la Communauté Européenne’. 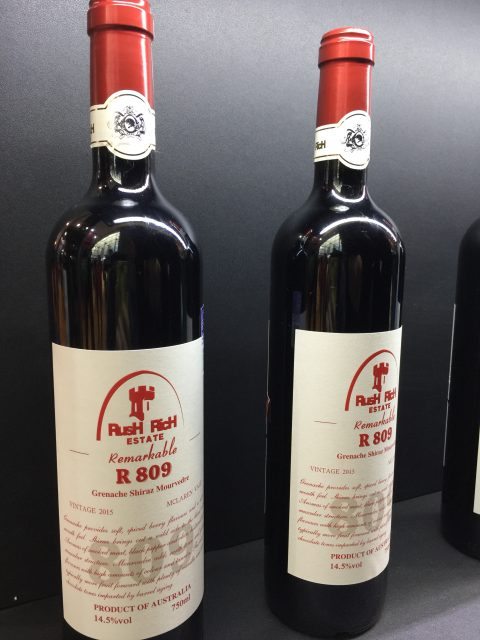 Chinese consumers’ craze for Penfolds was a much discussed subject among importers and e-tailers at the Chengdu wine fair.

At one point during a seminar on China’s imported fine wine trend, general manager of China’s leading e-tailer YesMyWine.com, Davis Luan boldly stated that Penfolds’ influence in China is greater than domestic wine brand Great Wall as its sales single-handedly surpassed the well known domestic wine; if, that is, one combined all the wine sales from smuggled bottles and fake Penfolds on top of all the legitimate channels.

This wine seen here is a ‘product of Australia’ and plays on Penfolds’ well-known Chinese name – 奔富 – and actually translated it back into English as ‘Rush Rich’ (rather than the real meaning, which loosely transliterates as ‘towards prosperity’).

The company has a booth at the main Chengdu wine fair at the Chengdu Century City New International Convention and Exhibition Centre.

Don’t bet on the horses 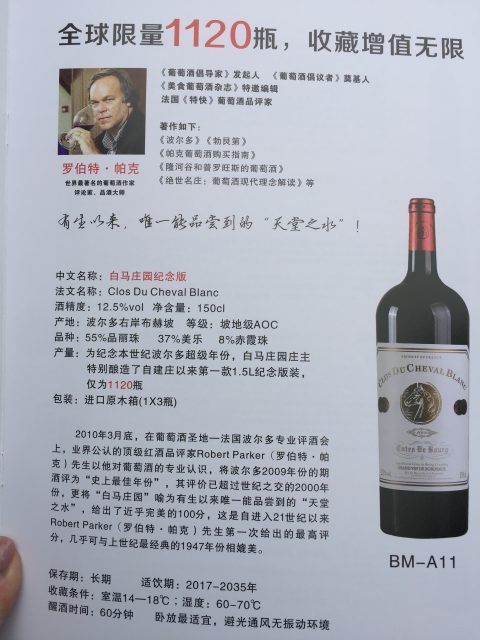 Apparently a 1.5 litre bottling of Château Cheval Blanc’s commemorative wine is on offer at the Chengdu wine fair. Called ‘Clos du Cheval Blanc’, the company responsible for making the wine claims that only 1,120 bottles of such ‘rare’ wines were made to celebrate Bordeaux’s legendary 2010 vintage.

It turns out it’s even rarer than the company claims because, of course, the Saint-Émilion château never produced such a wine.

In the brochure handed out to all visitors near the entrance of the main Chengdu wine fair however, it purposely used Robert Parker’s rating and comments to mislead buyers to get their hands on one of the these limited 1,120 bottles for ‘its great investment value’ as written on top of the brochure.

Notice on the label that the wine appears to be labelled as being from the ‘Côte de Bourg’. There is, in fact, a winery in that appellation called Clos du Cheval Blanc but it has nothing to do with the Cheval Blanc in Saint Emilion and its label does not ape that more famous brand as this one does.

Lord of the manor 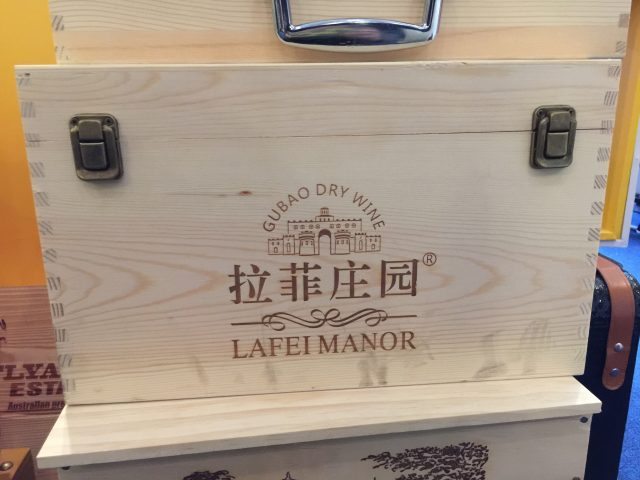 As previously covered by dbHK, Lafei Manor is one of the top rip-off Lafite brands in China and plays on Lafite’s Chinese name – 拉菲.

The wine made an appearance at the Kempinski as well.