Auction house Sotheby’s has withdrawn a magnum of 1959 Romanée-Conti from its next London sale after a query surrounding a strip label it carries. 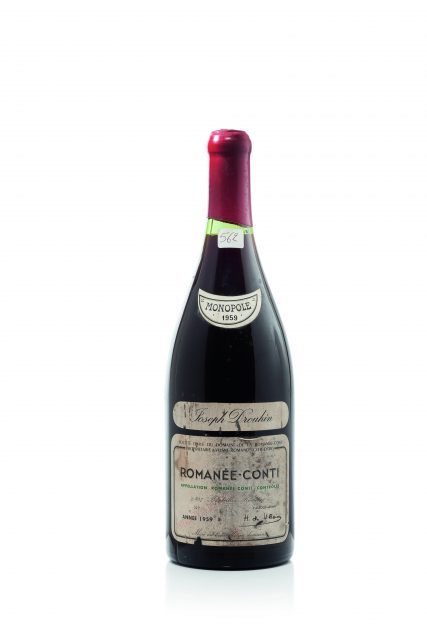 The magnum of Domaine de la Romanée-Conti (pictured) was due to be sold during the London leg of the ‘A Monumental Collection from the Cellars of a Connoisseur’ sale on 29 March.

It has now been withdrawn “pending further investigation” to ensure its provenance and authenticity following a comment about a strip label on the bottle posted on the drinks business’ website.

As reported by db earlier this month, the first part of the 1,290 lot sale will be held in New York on 25 March and the third and final part in Hong Kong on 1 April.

However, a comment beneath the story posted later the same day queried the addition of a strip label on the bottle bearing the name of well-known Burgundy négociant and producer, Joseph Drouhin.

The commentator tried to insinuate a link between the bottle and the now infamous The White Club*, writing: “Why would a DRC domaine-bottled wine have a Drouhin label on it?

“Indeed, the last time I did see a Drouhin label on a DRC RC bottle it was the handiwork of René Dehn and Malene Meisner of The White Club – and we all know what happened there…”

db posed the comment to Sotheby’s and received the following response: “Our research to date confirms that this magnum number was sold by Domaine de la Romanée-Conti to Drouhin.

“Our preliminary review of the printing of the front, back and neck labels does not indicate that this is inauthentic. However, we are conducting further research and have decided to withdraw it from the auction.”

Why a bottle of Domaine de la Romanée-Conti would carry a label referring to Drouhin is easily explained when one considers how wines from the estate used to be distributed.

Domaine de la Romanée-Conti was unusual in Burgundy in that it was an extremely early adopter of estate bottling. Initially this was just for its Romanée-Conti, the other wines of the estate were still sent, as was traditional throughout the region, to bigger négociant houses in Beaune for bottling, including Maison Joseph Drouhin.

Gert Crum in his book on the history of Domaine de la Romanée-Conti (published in 2005) notes that it was not until 1929 – a particularly good vintage – that Edmond de Villaine and then co-owner Jacques Chambon decided to begin bottling these other crus at the domaine.

Nonetheless, even if the proportion of wine bottled by Drouhin for the estate declined after this date it remained an important part of the distribution network.

As Crum continues in his book, into the 1940s Drouhin was still “the largest distributor of the Domaine’s wines.”**

With the arrival of the Leroy family in 1942, a family with its own substantial négociant business and distribution network (Maison Leroy), Drouhin’s role as a major distributor no doubt declined yet further but it did not finish entirely and Maison Joseph Drouhin was still an important buyer of wines from Domaine de la Romanée-Conti for several decades afterwards.

Sotheby’s statement makes it quite clear in this regard when it states: “Our research to date confirms that this magnum number was sold by Domaine de la Romanée-Conti to Drouhin.”

The unfortunate association of Domaine de la Romanée-Conti with a number of recent high-profile fraud cases such as The White Club and “Dr Conti” himself, Rudy Kurniawan, tied in as it is with the extraordinary demand and prices wines from the estate command and what is seen as the culpability and malpractice of a few auction houses in accepting consignments of fake wines, naturally leads to high levels of scrutiny even paranoia surrounding old (and sometimes younger) bottles of Domaine de la Romanée-Conti.

Aubert de Villaine, the domaine’s co-owner, has continually stressed however (including again to db at the tasting of the 2014 vintage in London last month) that trying to authenticate bottles by looking at pictures alone can be a haphazard undertaking.

It would be fair to say that, although through no fault of its own, not knowing in the early to mid-20th century just how sought-after and expensive its wines would become, the domaine’s former distribution and labelling practices have not always helped contribute to a clear understanding of what and might not be counterfeit.

Particularly in the wake of the Second World War, labelling and other packaging inconsistencies were once rife and as few records were kept of said inconsistencies what can be, in fact, real bottles are easily now subject to suspicion.

On the other hand, not all record keeping was so haphazard especially with regards to lot numbers, and Sotheby’s has confirmed that this bottle was indeed part of an allocation handled by Maison Joseph Drouhin.

*Although as Dehn and Meisner are known to have mixed in counterfeits with authentic wines, it may be that the Romanée-Conti with a Drouhin label apparently seen at a TWC event was real.

** Which is why Maurice Drouhin was the first to be offered Chambon’s share of the domaine in 1941 but he declined due to his being imprisoned by the Gestapo at the time.