Budweiser has joined the space race to become the first to send beer to Mars, embarking on a mission to produce a microgravity brew that can be enjoyed on the Red Planet. 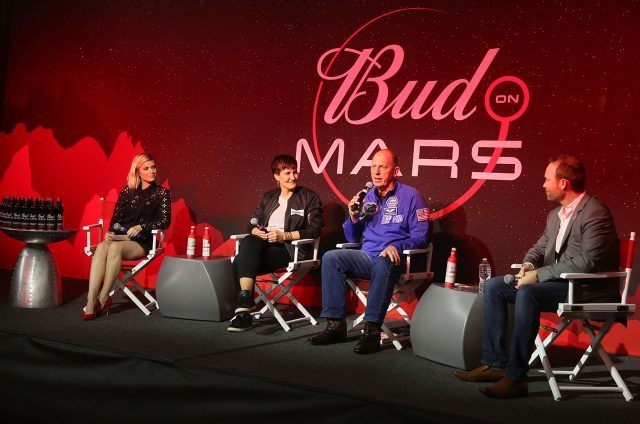 A mission to send humans to Mars is still likely a decade or two away from being a reality, but it is in Nasa’s long-range plans, with Budweiser hoping its brew will be on board when the first manned mission to Mars blasts off.

However the challenge in creating a beer that can withstand the gravitational difficulties of space is easier said than done. Currently, NASA astronauts are not allowed to imbibe while in orbit, but several space travellers have enjoyed a tipple in space, with varying degrees of success.

In 1969, Buzz Aldrin took a sip of wine after landing on the moon, but later said the gravity caused the wine to “swirl like syrup around the cup”, making for a less than satisfactory experience.

With regards to beer, the challenge is the bubbles, as without gravity bubbles don’t rise, producing foam throughout the liquid rather than on the top. Furthermore, the gas in beer makes it a difficult beverage for astronauts to stomach.

Without gravity to draw liquids to the bottoms of their stomachs, leaving gases at the top, astronauts tend to produce wet burps. This is the reason that carbonated beverages are not included on space menus.

But while Budweiser wants to be the first branded beer in Mars, some 39 million miles away, there are already those working on a way to produce beer in space.

A team in San Diego are hoping to brew a small amount of beer on the Moon to see how yeast behaves in lunar conditions. The experiment from the University of California San Diego team is competing to be taken into space onboard an Indian craft that will be taking off this December. ‘Team Original Gravity’, as the six undergraduates call themselves, has already been selected from an original pool of 3,000 and are now down to the final 25.

The entire experiment will take place inside the can and will combine the fermentation and carbonation stages of brewing as any release of carbon dioxide could endanger the spacecraft.

Budweiser’s project to create a microgravity beer that can be taken into space and consumed on Mars will likely be decades, or more, in the making, but if successful could spell not only the next frontier for mankind, but the beginning of interstellar marketing.

“Through our relentless focus on quality and innovation, Budweiser can today be enjoyed in every corner of the world, but we now believe it is time for the King of Beers to set its sights on its next destination,” said Ricardo Marques, vice president, Budweiser.

“When the dream of colonizing Mars becomes a reality, Budweiser will be there to toast the next great step for mankind.”