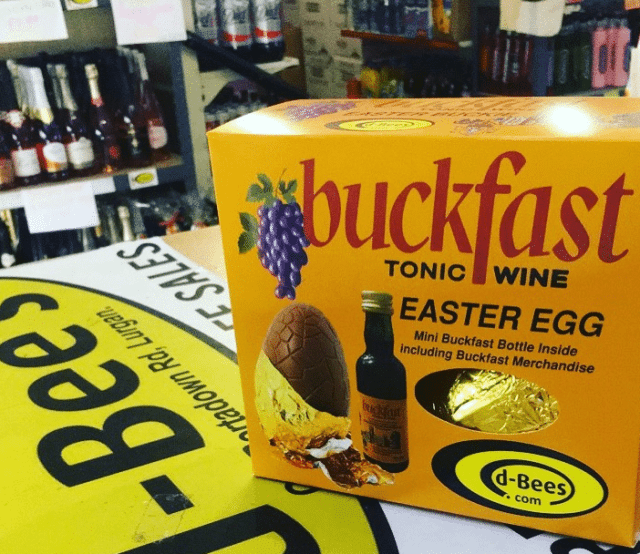 An Easter egg package has gone on sale in Northern Ireland containing a miniature (5cl) bottle of Buckfast tonic wine.

As we reported last week, although under-18s cannot purchase the product, the packaging displays the contradictory message that ‘portions should be adjusted for children of different ages.’

Stewart Wilson, sales manager of J Chandler, told BBC News that the company had not sanctioned the Easter egg, adding: “It’s an unofficial product and we oppose the actions of the individual.”

Continuing, Mr Wilson said: “The Easter eggs that are currently being advertised for sale in Northern Ireland and elsewhere in the UK have not been authorised or instigated by our company.

“We strongly advise the public not to purchase them. It’s highly irresponsible given the nature of a confectionary product that’s mainly given to children.”

“Our products are for adults and we do not engage in any activity that promotes our products, either directly or indirectly to children and young people.”

The product also contains a branded lighter and pen which Wilson said is a “breach of trademark and we are taking measures to get the sale of the product stopped immediately.”

“I have never known an Easter egg to be sold with a lighter so there are safety concerns as well,” he added.

The Courier reported that D-Bees have received over 2,000 orders for the product in 24 hours, prompting the website to crash.

Buckfast is a tonic wine made at Buckfast Abbey in Devon. Its alcohol content (15% ABV), caffeine content (30mg/100ml) and price (around £6 per 75cl) have ensured that the tonic wine is never far from controversy.

It is particularly popular in Scotland where it has often been linked to violence and anti-social behaviour.

In 2015, the Scottish Prison Service reported that 43.4% of inmates had consumed Buckfast before their last offence.

However, Buckfast, or ‘Buckie’ as it is affectionately known, remains popular. Glaswegian self-titled ‘Mad Chef’ Danny McLaren has even used the product in recipes, creating a Buckfast ice cream.